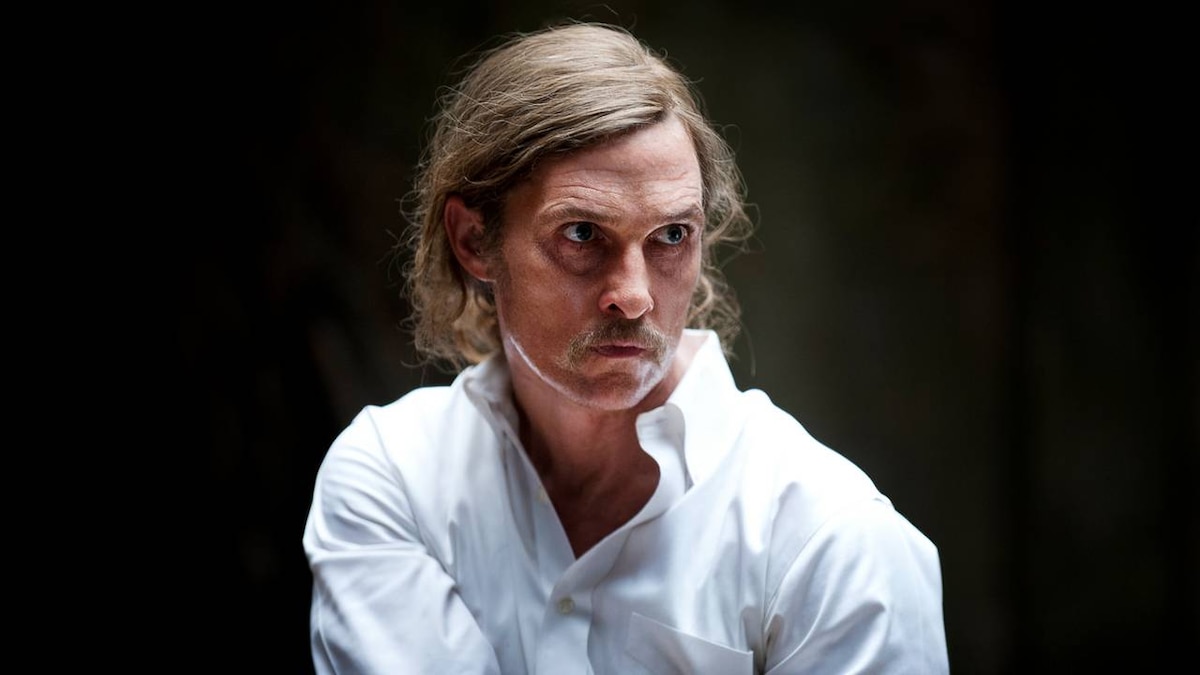 Errol Childress, the parish groundskeeper who gave directions to Gilbough and Papania and spoke to Rustin Cohle in 1995, walks into a secluded shack with walls covered in scrawled, arcane writing. He promises to bring water to his ‘daddy', a silent man bound to a bed. Errol enters a filthy house and greets Betty, his mentally unsound lover. Using voices mimicked from old VCR movies, Errol speaks of having left his sign weeks ago, and a mysterious ascension.

"Nobody ever gave me a reason to second guess it. It's chain of command." - Steve Geraci

Marty Hart and Rustin Cohle hold Steve Geraci at gunpoint on a fishing boat. They force the sheriff to watch the video that Cohle stole from Billy Lee Tuttle's home. Rust explains that the girl in the footage is Marie Fontenot, a missing person whose case Geraci reported in 1990. Disturbed, Geraci explains it was Sheriff Ted Childress who claimed to know Marie's family and dismissed the case, that shortly after he was promoted to CID and never given a reason to question it.

The partners release Geraci and warn him off, lest they claim the videotape was found in Geraci's possession. As additional insurance, a hitman will take out the sheriff if any harm comes to Cohle or Hart. At Geraci's threats, Cohle signals his associate Robert Doumain, who sprays bullets into Geraci's Maserati from the woods to illustrate the point.

"Everybody's got a choice." - Hart

Back at Hart's PI office, Cohle and Hart break down the convoluted Tuttle family tree. Hart notices a discrepancy in two pictures of the Erath neighborhood where Dora Lange disappeared; in an older picture, one house has a fresh coat of green paint. The pair hypothesize that their suspect painted the house - possibly why a girl reported being chased by a green-eared spaghetti monster.

En route to visit the green house, Cohle and Hart discuss their 2002 fight. Both men accept responsibility for what happened with Maggie. Cohle informs Hart that Maggie stopped by the bar to make sure her ex-husband was safe. Hart is irritated that Cohle didn't tell him earlier, but Rust explains that he wanted to avoid any appearance of judgment.

The pair track down the owner of the green house at the time it was painted, an elderly woman named Lilly Hill. She recalls that the painters were from her parish and that one man had a scarred chin. Reviewing tax returns Lilly's husband filed, Hart finds the job was charged to Childress and Son Maintenance, a business registered by Billy Childress in 1978. Records show the company worked all over the coast, at schools and playgrounds, sites matching locations where women and children disappeared. Billy Childress' records show no son, but an old address is listed.

Cohle presents Doumain with 10 packages addressed to various law enforcement agencies and press outlets. He instructs Doumain to mail the evidence if he does not hear from Cohle for 24 hours.

Hart meets with Papania and learns the CID has made no progress with the Lake Charles case. Papania inquires about what Hart and Cohle have been working on, and Hart warns Papania to be ready for a call.

"What happened to my head... It's not something that gets better." - Cohle

As Cohle and Hart arrive at Billy Childress' remote country address, Cohle picks up the taste of ash and aluminum. He also reveals that he's never stopped seeing visions. When they arrive, Cohle looks at Hart knowingly: "Marty, this is the place." Unable to get a cell phone signal to call Papania, Hart uses the situation as an excuse to knock on the door. Betty answers, but tells Hart she has no phone. When asked where the man is, she replies, "all around us." The dog leaps out from inside the door and races past Cohle to the other side of a shed -- it yelps loudly and is silenced. Hart forces his way in and Cohle circles the back of the house, where he spots Errol. Ignoring Cohle's warning to stop, the man sprints into the woods. Cohle pursues Errol and comes upon an overgrown brick edifice, ancient and sunken into the earth. Inside, he navigates a maze of dark tunnels filled with children's clothes, bones and giant latticeworks. Errol announces, "This is Carcosa." After locating Betty's phone, Hart follows Cohle. Errol speaks to Cohle from concealment in the maze, further illuminating his twisted history and vision.

Cohle comes upon a multi-headed skeleton wearing a crown of antlers and yellow cloak. Distracted by a vision, he gets a knife in his gut when Errol sneaks up on him. Cohle is close to dying when Hart rushes in firing shots, but Marty is quickly toppled when Errol throws a hatchet into his shoulder. Cohle manages to shoot Childress in the head before he can finish Marty off. Wounded but alert, Hart tends to Cohle until police arrive on the scene.

Days later, Gilbough and Papania visit Hart in the hospital. The detectives confirm that Errol and Betty were children of Billy Childress. One of the knives on the scene matched the wounds on the Lake Charles victim and another matched Dora Lange; Hart's case is closed. The press reports on a federal excavation of the Childress property, uncovering human remains that link the serial murderer to dozens of missing persons. All connections to Senator Edwin Tuttle, however, have been refuted, indicating further coverup.

Hart is surprised when Maggie and his two daughters arrive. Overwhelmed, he breaks down in tears while assuring them he's fine. Later, Marty visits Rust's room and Cohle laments he didn't recognize Errol when they met in 1995. Cohle is angry they didn't get all the men in the video, all the men involved in the conspiracy, but Hart assures him, "We got ours."

One evening after Cohle is mostly recovered, Hart wheels him outside so that he can smoke. Cohle is shocked and disappointed that he survived. Cohle shares that when he was on the operating table and in a coma, he felt himself die. And he felt his daughter and father waiting for him: "It was like I was a part of everything that I ever loved." He describes dying and feeling nothing but love. Then he woke up, and the fact sends Cohle into a breakdown.

To pull him out of this despair, Hart inquires about the stories Cohle made up as a child in Alaska about the stars. Cohle explains that the narrative was always "light versus dark." Hart muses that according to the night sky, the dark's got a lot more territory. Cohle asks Marty to take him away, saying he's spent enough of his life in hospitals. After a moment, Cohle counters, "Once there was only dark. If you ask me, light's winning." Hart supporting Cohle on his shoulder, both men exit, leaving Cohle's wheelchair behind.