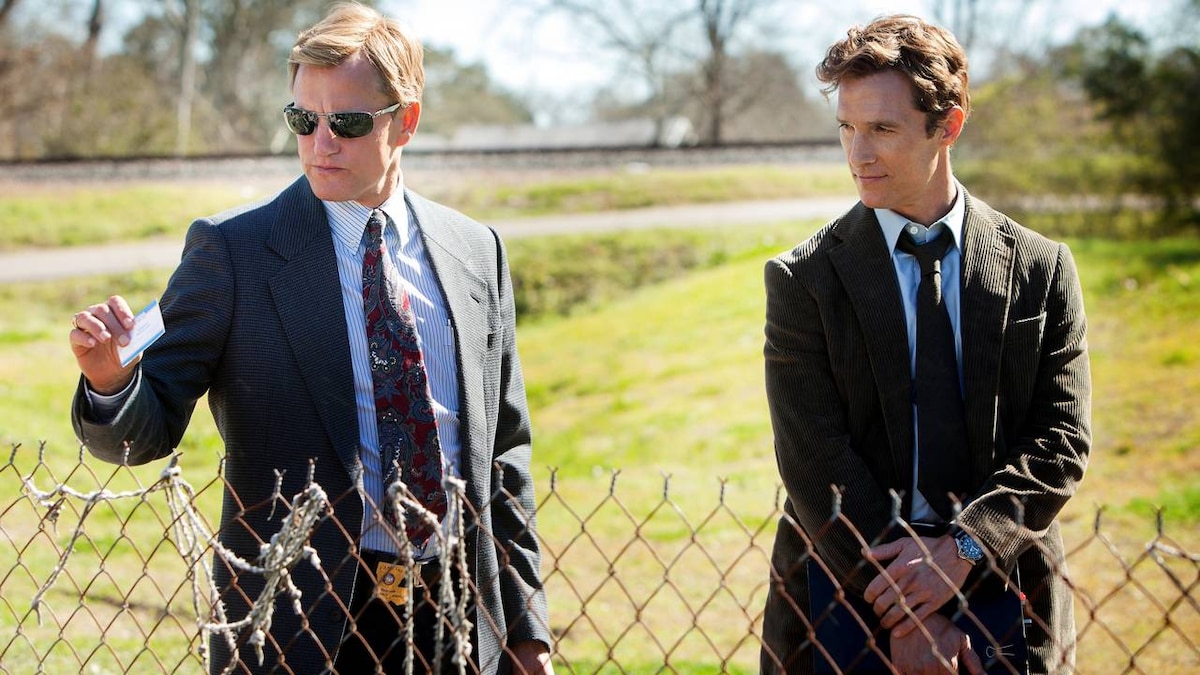 "People out here, it's like they don't even know the outside world exists." – Rustin Cohle

In 1995, Louisiana State CID detectives Martin Hart and Rustin Cohle investigate a murdered woman found in a burned sugarcane field near the town of Erath. The victim is bound and blindfolded, wearing a crown of roots and antlers, with a blue spiral painted on her upper back. Sculptural stick lattices are also found nearby. Cohle sketches the crime scene in his large portfolio, a trait that's earned him the nickname "The Tax Man." He shares his theory with Hart: This isn't the killer's first victim.

Both Hart and Cohle are questioned individually about the scene in 2012 during a recorded session for the Louisiana State Police Crime Investigation Division. A clean-cut Hart and unkempt Cohle discuss their initial impressions of each other: After seeing his apartment, Hart felt sorry for Cohle. However, as a Christian family man with two young daughters, Hart is put off by Cohle's conviction that "human consciousness is a tragic misstep in evolution." Once Cohle states that the most honorable course for humanity would be extinction, Hart declares their squad car a place of silent reflection.

Hart and Cohle return to CID headquarters where Hart reports to Major Ken Quesada. Hart vouches for Cohle to his boss, and the pair is officially assigned to lead the murder case.

Leaving Hart with the paperwork, Cohle takes off. In 2012 he explains it was his daughter's birthday and he hoped to distract himself with work. At a trucker bar, Cohle finds prostitutes who knew the victim. He gets nowhere with questioning, but is able to arrange to buy Quaaludes to help him sleep.

The body from the field is identified as Dora Kelly Lange, a 28-year-old former prostitute. Medical Examiner Gordon DiCillo's autopsy reveals Lange had LSD and crystal meth in her system. No other fingerprints were found. Hart briefs the unit on the case, which has already generated unease because of a local news story referring to the crime as an occult murder.

The partners continue the investigation by questioning neighbors door-to-door. A minister likens Cohle's sketch of the latticework sculptures to the "devil nets" that he made as a child, which resemble Cajun bird traps. Another man asks if the victim was "that Fontenot girl," a little girl who disappeared five years before. Cohle and Hart follow up with the local sheriff, only to learn the girl, Marie Fontenot , received no investigation. The case was dismissed as ‘made in error', Sheriff Tate explains, because the girl went off with her birth dad. Another complaint was shelved when a little girl recently asserted she was chased through the woods by a "green-eared spaghetti monster."

Hart and Cohle speak to Charlie Lange, Dora's ex-husband, in prison. He tells them when they last spoke, Dora was high, and claimed she was becoming a nun and had met a king. The detectives tell Charlie that Dora is dead.

"Rust'd pick a fight with the sky, he didn't like its shade of blue." – Martin Hart

Hart is forced to run interference when Cohle spars with the other officers and disrespects the Reverend Tuttle, a powerful force in state culture who's lobbying for a task force to investigate anti-Christian crimes. Cohle is openly appalled at the idea and Hart has to explain the reverend is a cousin of the governor. Hart takes a break when Lisa Tragnetti, a court reporter, stops by for a private debriefing.

Because he lives close by, Hart and Cohle visit Marie Fontenot's uncle Danny, a former ballplayer immobilized after a series of strokes. His wife reveals no one has heard from either of Marie's parents. Cohle examines the backyard where the girl used to play and discovers a twig latticework in a dilapidated playhouse.

"I was sitting there and I couldn't think of a good reason not to." – Cohle

Hart recounts to the investigators an episode in which Cohle arrived drunk to dinner with Hart's family: Upset and apologetic, Cohle confesses he had problems with alcohol in the past. Hart tries to salvage the night by orchestrating a call from the station as an out for his partner. At dinner, Cohle meets Hart's daughters and his wife, Maggie, who is kind and curious about her husband's new partner. At ease, Cohle reveals to Maggie he lost his daughter; his marriage didn't last after that. To Marty's chagrin, even after getting a call from the station, Cohle decides to stay for the full meal.

The 2012 interrogators, Detectives Gilbough and Papania, grill Hart for information on Cohle. They're suspicious in part because Cohle was off the grid for eight years until 2010. In his interview, Cohle refuses to comply until he's presented with a six-pack of beer. Once he's appeased, Cohle cuts to the point; he knows a new murdered woman was found in Lake Charles. The detectives present him with a picture of the crime scene, where the victim wears the same type of crown as Dora Lange. Cohle reminds Gilbough and Papania that he and Hart already caught Dora's killer, so if they want to know the connection between the cases they should "start asking the right fucking questions."