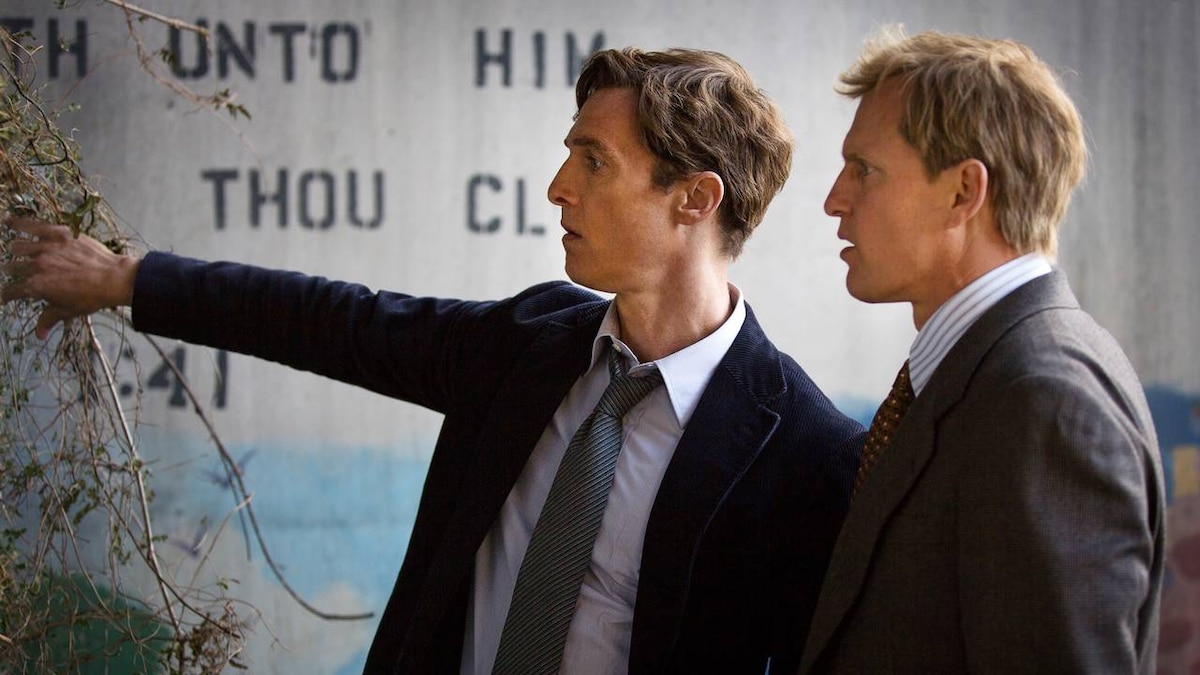 Detectives Rust Cohle and Marty Hart continue their investigation into Dora Lange's murder. The case's possible connection to another missing girl, Marie Fontenot, proves tenuous; there's no explanation for how the lattice structure came to be in Marie's old playhouse. The partners turn their attention to Dora's family. Her mother confirms Dora's father is dead, but gets defensive talking about his relationship with his daughter. Mrs. Lange mentions Dora had joined a church. The detectives learn Dora told her friend Carla the same thing, but Carla maintains that Dora was not sober. Cohle suspects that Dora was an easy target for the killer.

"I know who I am. After all these years there's a victory in that." – Cohle

Cohle admits to Hart that he stayed at dinner, despite the staged phone call, because he enjoyed being around Maggie and girls. He explains he was worried about being around them as his own family fell apart after his daughter's death. Years later, Cohle tells detectives Gilbough and Papania that he's still alone, although he almost married Laurie, a girlfriend he met through Maggie. That relationship fell apart for the same reason that Cohle excels at detective work: He picks people apart. He now spends his days running a bar and drinking.

Cohle tells Gilbough and Papania that at the time of the Lange investigation, he occasionally suffered hallucinations. These visions are from neural damage developed during his time working undercover in the High Intensity Drug Trafficking Area along South Texas. After losing his daughter, Cohle transferred to narcotics and quickly developed a drug problem. While on the job, he shot a man who had injected his infant daughter with crystal meth. To avoid prosecution, he inked a deal with the State Attorney to function as a floating deep undercover narcotics agent. Cohle worked the circuit for four years, until the violence and stress sent him to a psychiatric hospital. Despite an offer of psych pension, Cohle chose to work homicide. His undercover work ruled out Texas, and he was given a job in Louisiana where he became Hart's partner.

"I think a part of Rust's problem was there were things he needed that he couldn't admit to." – Hart

Hart pays a late night visit to Lisa Tragnetti's apartment. He rationalizes his affair is a way to detox before going home to his family. The same night, Cohle purchases Quaaludes from a prostitute named Lucy. The girl admits that Dora may have been working at "The Ranch," a trailer park near Spanish Lake. The next day, Cohle and Hart set out to find the place. Realizing Marty never made it home, Cohle mentions it, triggering a fight between the two men.

Cohle coerces directions from mechanics at a garage, and the pair arrives at "The Ranch." They question Jan, who leases the property, and Beth, an underage prostitute who Dora befriended. Disgusted that a girl as young as Beth works there, Hart confronts Jan, who berates him for judging. Hart hands Beth some money before the partners leave with Dora's bag. Inside is her diary, filled with entries that read "like fantasy." Tucked into the pages is a flyer for the Friends of Christ Revival.

The Hart family spends an afternoon with Maggie's parents. Worn-out by his contemptuous father-in-law, Marty cuts the family day short. Maggie is furious that her husband is checked out, and the couple fights later that night. Things at the Hart household get worse when Marty discovers how his girls are playing with dolls.

"Most of the time I was convinced that I'd lost it. There were other times… I thought I was mainlining the secret truth of the universe." – Cohle

Major Quesada introduces the new task force assigned with investigating crimes with possible occult links. When Cohle implies they aren't real cops, Quesada gives him some advice: "Shut the fuck up." The only reason Cohle is working this case, his boss stresses, is because Hart vouched for him. He reminds the partners that without a major break, they're likely to lose the investigation to the task force. Quesada agrees to Hart's request to give them another week.

Cohle and Hart search for the tent revival in Dora's flyer. Scanning the sky, Cohle has another hallucination – a flock of birds cluster in the shape of the spiral painted on Dora's back. The two discover a burnt down church. Primitive religious paintings cover the inside walls of the scorched building. Pulling back some vines, Cohle uncovers a larger painting of a naked woman, bound and wearing a crown of antlers – just like Dora Lange.