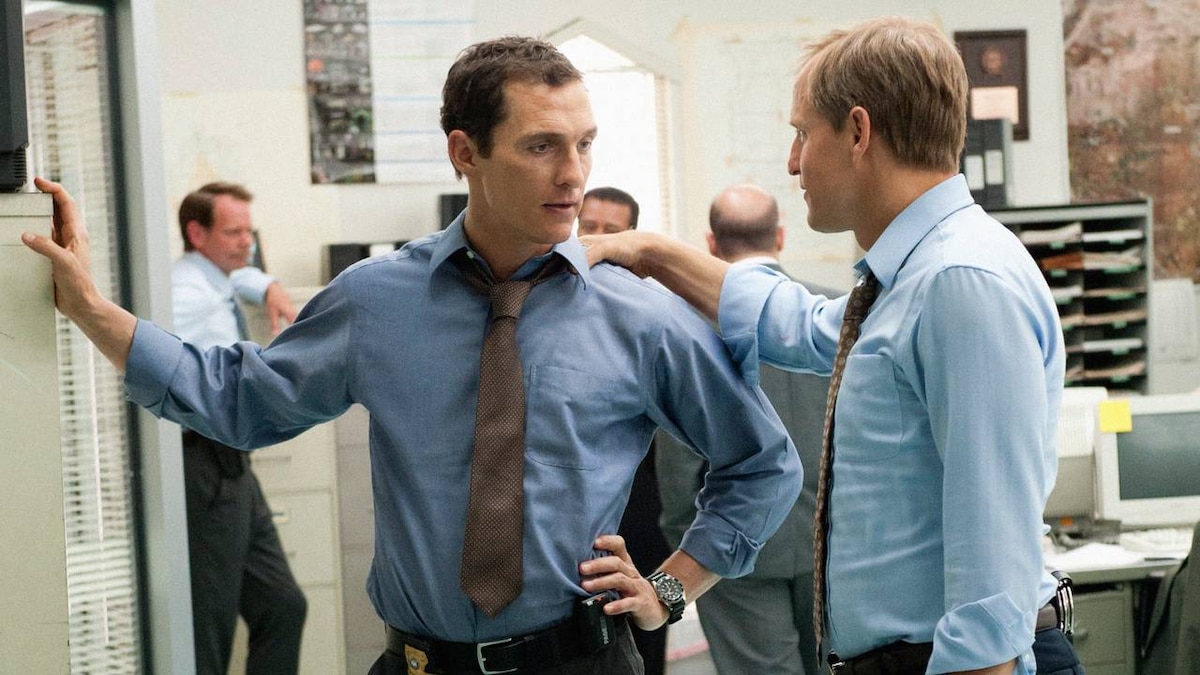 In 2002, Martin Hart visits the holding cell of the two young men caught with his underage daughter. Hart offers them a choice: prison time in Angola or his version of justice. After beating the two boys, he leaves the building and vomits.

As part of his personal investigation into missing women and children, Cohle questions a man named Terry Guidry about his son. Rust learns that before he disappeared, the boy attended Queen of Angels, a school that participated in the Tuttle Ministries voucher program.

Hart buys a cell phone and opts to have a drink in lieu of going home. At the bar, he is approached by Beth, the phone salesgirl. After a few drinks, Beth reminds Hart that they met years ago at Dora Lange's ranch; she was the young prostitute. Hart feeds into Beth's adoration and the pair end up in bed together. Although he tries to cut things off after just one night, he ultimately acquiesces to Beth's persistent come-ons.

In 2012, refusing to believe Papania and Gilbough, Hart leaves the interrogation room. Driving home, in his rearview mirror, he sees someone honking behind him.

"All my life I wanted to be nearer to God... But the only nearness is silence." - Joel Theriot

Cohle visits Joel Theriot, the former preacher from the Friends of Christ Revival in 1995. The disheveled Theriot talks about Wellsprings, an evangelical initiative of Tuttle schools that reimbursed rural Christian schools. While studying at Tuttle's Baton Rouge college, Theriot inadvertently discovered a folder filled with pictures of naked children. When he brought the issue to the school's deacon, Austin Farrar, Farrar took the information with irritation. Theriot left the school a few months later; eventually he left the ministry after decreasing attendance, losing tents to vandals and succumbing to drink.

In 2012, detectives Papania and Gilbough question Maggie, now divorced from Marty. The interview begins with questions about Rust and Maggie vouches for him. Unlike her husband, Maggie explains, Cohle "knew exactly who he was."

"In a former life I used to exhaust myself navigating crude men who thought they were clever." - Maggie Sawyer

Rust works a confession in 2002 from a woman named Charmaine Boudreaux who murdered her three infant children. Charmaine breaks down in tears and seeking relief from Cohle, is told: "If you get the opportunity, you should kill yourself." Later, citing that he has other work to do, Cohle tasks Hart with the paperwork. Marty resents taking orders and pushes back. "Without me, there is no you," Cohle retorts.

Another afternoon, Maggie is surprised to find Marty's clothes in the washer. Suspicious, she looks through his cell phone and finds messages and a sexy picture from 'B.' She chooses not to confront her husband and instead goes to a bar to pick up a man.

"The man with the scars was the worst." - Kelly Reider

Cohle visits Kelly Reider, the girl he pulled from Ledoux's cabin years earlier. Institutionalized and catatonic, she is not initially responsive to Cohle's questions. The girl mentions a "giant" with facial scars who made her "watch what he did to Billy" but the interview is cut short when Kelly starts shrieking uncontrollably.

"I can't decide if it's a cover-up or the garden variety incompetence here." - Cohle

Ignoring the warning, Cohle visits Billy Lee Tuttle, stating his inquiry pertains to "dead women and children." When Cohle probes about the deacon who intimidated Theriot, Tuttle says that Austin Farrar was dismissed for embezzling funds before he died in a drunk driving accident. The reverend promises Cohle full access to Wellspring's documents and discloses that the now-defunct ministry program will reopen once the voucher initiative is restored.

"Some people, no matter where they look, they see themselves." - Maggie Hart

Salter learns of Cohle's meeting with Tuttle, and suspends Cohle for one month. At home, Cohle drinks and scans the collection of evidence he has gathered. He's surprised to find Maggie at his door, crying. She tells Cohle that Marty is cheating again and kisses Cohle. The two have sex and as Cohle absorbs what they've done, Maggie tells him she slept with him to end her marriage. She used him and is going to tell Hart about it. Furious at what they've done, Rust throws her out of his apartment.

At home, Maggie tells Marty about her and Rust. Hart is still reeling from the confrontation the next day when he learns Cohle has come to the office. Marty rushes to the parking lot and lunges at his partner. A violent fight ensues. The men are separated and when the major demands answers, neither man will disclose details. Cohle quits on the spot. Maggie also withholds the truth when questioned in 2012; feigning ignorance about the fight between Rust and Marty, she maintains her divorce had nothing to do with Cohle.

In 2012, while driving home from the interrogations, Marty is pulled over by Cohle, honking his horn and flashing his lights. Cohle approaches Marty's car as Hart conceals a loaded pistol. Cohle suggests they should talk.