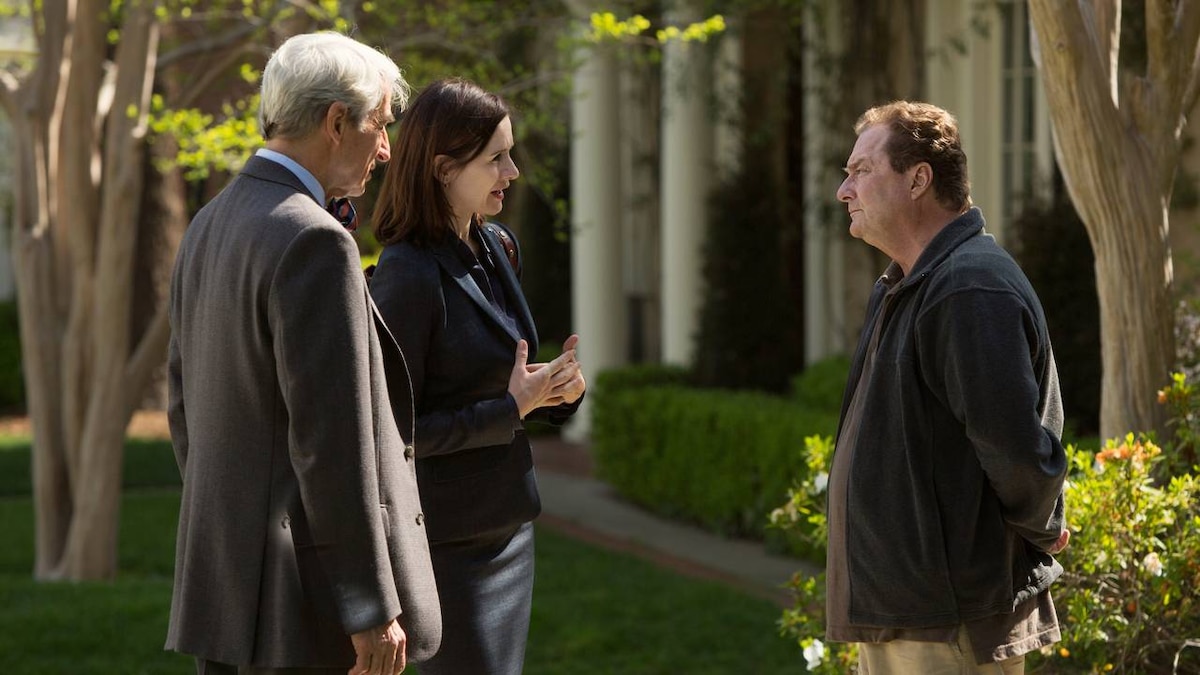 One Step Too Many

Charlie, Mac, Jerry, Neal and Maggie conduct the first red team meeting for the story about Operation Genoa. They present Sloan, Jim and Don with seven months of research that have yielded five sources; Cyrus West's story, Eric Sweeney's testimony, tweets from Hamni8, Leon Deit's report and the helicopter manifest Shep gave to Charlie. The red team, especially Jim, is skeptical, but Jerry pushes back with conviction. Mac and Charlie plan to move forward with the investigation by questioning retired General Stanislaus Stomtonovich, an expert on chemical weapons whom they believe can confirm the mission.

Mac and Charlie arrive at Stomtonovich's home. Despite a phone call the previous day, the general forgot they were coming. While he concedes the U.S. has chemical weapons, he's reluctant to answer further questions. Charlie finally mentions Genoa, and Stomtonovich agrees to be interviewed on-camera as long as his identity is concealed.

Sloan finds Will watching focus group data of the previous night's broadcast. He commissioned the report himself, he admits, because he's concerned about his likeability rating. At home later that night, Will reviews his broadcast with Nina. She believes Will is being sacrificed so that Charlie and Mac can do the show they want. She advises him to go on a morning show the next day. Will books an appearance, which goes terribly. Humiliated, he immediately breaks up with Nina. When he arrives back at his office, Sloan is waiting for him. She hypothesizes that Will's need to be liked by the audience stems from his breakup with Mac and encourages him to embrace who he is.

Via Skype, Jim and Hallie discuss their upcoming romantic evening in the city. Jim has planned dinner and a night at a hotel. His hopes of alone time with his girlfriend are dashed when Hallie asks him to invite Neal as date for her friend Aubrey Lerner. When the boys arrive at the Romney fundraiser to pick up their dates, they run into Taylor, who Hallie invited to join the group. At dinner, the talk turns to politics and Taylor reveals she was fired for suggesting changes to Romney's campaign strategy.

Jim and Hallie head to their hotel where Jim notices Maggie drinking alone at the bar. They say hello briefly and head to their room, but their plans are ruined when Hallie learns she has to leave immediately due to a schedule change. On his way out, Jim stops to remind Maggie to be careful not to mention Genoa while she's drinking. Maggie retorts that she's been covertly working on the story for months. She leaves with the bartender.

Mac runs into Don at a bar and fills him in on Stomtonovich's confirmation. Don believes Jerry, but he encourages her to consider all the consequences of airing the story, including the threat of protests and attacks against the U.S.

Maggie and Jerry arrive to interview Stomtonovich at his home. The general is difficult about being interviewed; he refuses to turn off March Madness and because he was unaware that Maggie would be present, he makes her wait outside. Jerry asks about Genoa, and while the general admits the operation happened, he won't explicitly say that sarin gas was used in it. Back in the office, Jerry edits the interview so it appears as if the general demonstrably says sarin was used. He presents the edited version to the team, claiming it's the raw footage. Charlie is unconvinced about the general's reliability and asks for another witness. Jerry loses it; he's impatient and certain the story is ready for air.

Weeks later, 'News Night' gets a call on the assignment desk from Lance Corporal Herman Valenzuela, a source identified by Eric Sweeney who the team believed to be dead. After the broadcast, in a deposition with Rebecca, Charlie explains that Valenzuela is very much alive; he missed their calls because he was deployed. His confirmation was what made Charlie green-light the story. Immediately after the program aired, the team realized it wasn't true.