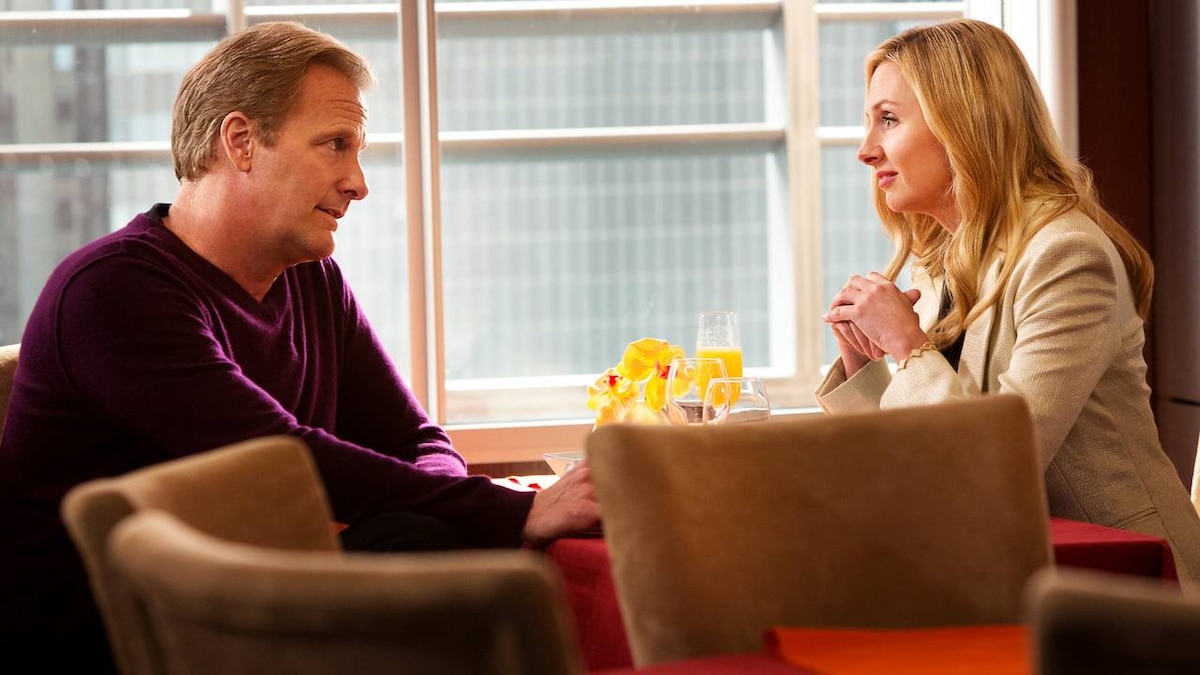 Will broadcasts a clip from a GOP debate during which a deployed soldier's YouTube question is met with boos from the audience because he's gay. Will dubs the debate's participants "witless bullies and hapless punks" for standing by as the man is attacked.

After the broadcast, Charlie and Will toast the segment's audacity; they're protected thanks to the tape of Reese admitting to hacking phones. Will gets word that gossip reporter Nina Howard has learned that he did not have the flu during the 9/11 anniversary. Charlie recommends making no comment, but Will decides to tell Nina the truth as part of his "mission to civilize."

Aboard the Romney press bus, Jim spars with Cameron about the nonexistent details of Romney's debt reduction plan. Hallie cuts off Jim's futile questioning: "Learn how this works because you're driving the rest of us crazy." Jim is undeterred and continues to ask Taylor, the Romney campaign spokesperson, tough questions about the candidate's platform. He confronts Hallie about her attitude and learns she finds him condescending. She's no amateur journalist; she started her own website with an investor to cover women's issues on the campaign trail.

Jerry and Mac meet Eric Sweeney, who tells them that Operation Genoa was a mission to extract two Marine POWs from Pakistan, during which U.S. soldiers used white phosphorous and sarin gas on civilians. Back in the office, Mac and a fully convinced Jerry present the story to Charlie. He is skeptical but advises them to follow up quietly. Jerry assembles a team to go through a list of the soldiers involved provided by Sweeney. They also turn to Twitter and hire a translator to interpret all the tweets from the area at the time of the operation.

Will meets with Nina and tells the full story about the 9/11 anniversary coverage, on the record. She asks if he chose to pull himself off, and Will admits it was Charlie's decision. Nina respects Will's honesty and agrees not to run the story. Will asks her out on a date, but she refuses because she knows from the hacked voicemail that Will still loves Mac.

Sloan consults with Don about an issue she's having with her executive producer, Zane. Don commends her position—she advises on moral grounds against investing in a company that makes drone missiles—but tells her she should listen to her EP. Later, Zane confronts Don about giving Sloan notes behind his back. Sloan defends her position and tells Zane off.

Sloane also discloses to Don that she accidentally leaked the story of Will's fake flu when she canceled a wedding date with Nina Howard's book agent. She comes clean to Will, infuriating him, but Charlie realizes that Nina couldn't have gotten the full story from Sloan, since the columnist knew it was Charlie's decision. They realize that the leak must have come from Reese and confront him with their recording of his phone tapping confession. Reese admits to leaking the story; he's tired of being disrespected and he's not afraid of their blackmail. Charlie tries to remind Reese of their leverage, only to find there's no recording on the device.

Fed up with Taylor's non-answers, Jim confronts her on the campaign bus, demanding she respond to real questions. He stages a protest and is joined by Hallie and one other reporter, Stillman, who get off the bus together and pledge to follow the campaign on their own and do actual reporting.

Neal asks Mac why the Occupy Wall Street march didn't make the show. She expresses frustration at the movement's lack of a definable mission statement and absence of leadership. Neal argues for their importance and calls out why Mac might not be interested—she's part of the one percent. Impressed by his gall, Mac tells Neal to find a competent representative to go on-air.

Maggie gets a slew of vaccinations in preparation for her trip to Africa and becomes unhinged as she learns the side effects include homicidal thoughts, depression and hallucinations. Her clearance has been approved provided the team tacks a human-interest story onto their agenda, so she and Gary are going to a children's orphanage in Uganda. Mac presents Maggie with a $100 bill. It's a tradition, Mac explains, to either come back with it or the story of where it went.

Mac calls Nina Howard to thank her for not running the story. She questions Nina about the voicemail Will left when he was high. Nina fibs that the message contained only professional congratulations; meanwhile, she's inside Will's apartment after a date.

Mac is about to pull the plug on Jerry's research team when his translator faxes a tweet from a user named @Hamni8 which references "Willie Pete", a name for white phosphorous. More tweets follow, describing Operation Genoa.