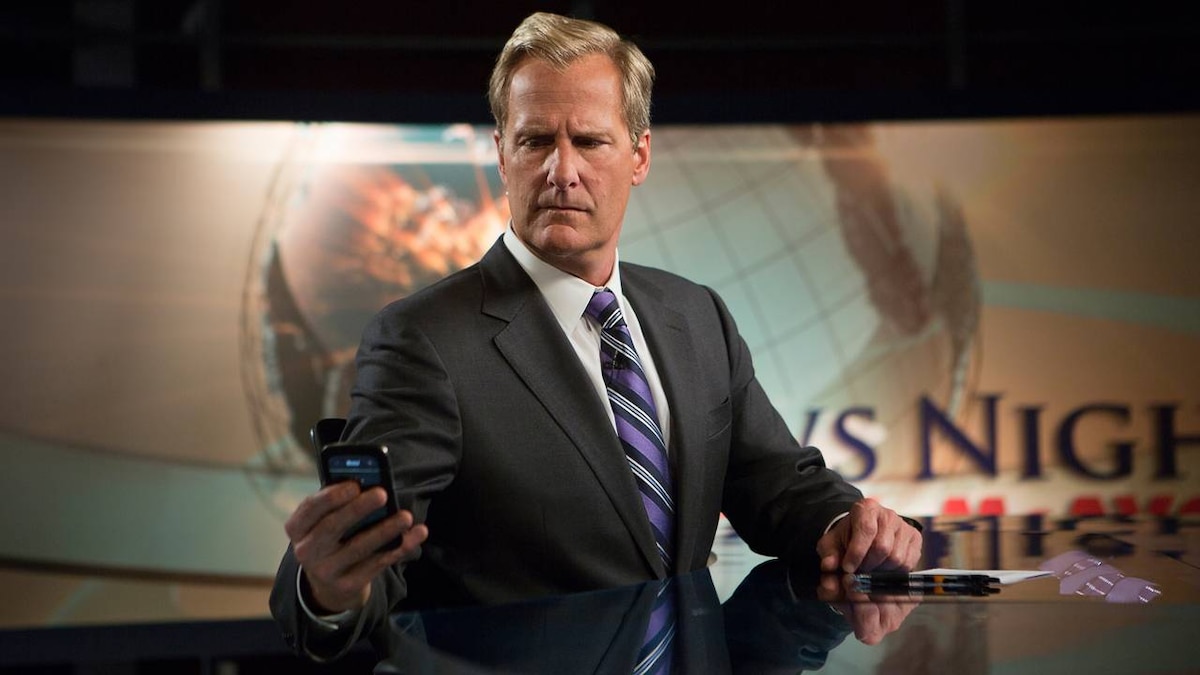 News Night with Will McAvoy

Will gets a call from his father just as he begins the News Night broadcast. When he returns the call during a commercial break, he learns that his dad has been hospitalized for a mild heart attack. Mac encourages Will to call back and speak to him.

Neal approaches Will with a tweet from a New York Post reporter who's claiming that the anchor snubbed her in a restaurant. Mac dismisses the issue, but Neal shows her another tweet with the #NewsNight from Jesse, a guest prepping to go on-air. As the Post reporter continues to tweet, Neal and Will work to formulate a reply. Mac is frustrated that Will is distracting himself from contacting his father.

Mac confronts Jesse, a 20-year-old college student from the Rutgers Gay-Straight Alliance booked to comment about Dharun Ravi. She asks about his tweet, which implies he plans to come out to his parents on the show. Mac explains that News Night is not in the business of using anyone's intimate life as entertainment.

The team on the newsroom floor learns there's been a bombing in Syria. Jim takes a call from a woman who says her husband is on the phone and trapped in the rubble. She patches her husband through and he asks for national coverage to expedite rescue efforts.

Charlie and Reese question Sloan about nude pictures of her that are circulating online. She finally admits the pictures are authentic; her ex-boyfriend leaked them. Since Sloan gave him the camera and voluntarily posed, ACN has no legal means of pulling them down.

Don finds Sloan on the floor of his office in the dark. She opens up about the scandal, explaining that she's devastated and shocked. Don promises that her humiliation will turn into rage and adds that Sloan deserves better than her dating history reflects.

Charlie gets a visit from Shep, the press liaison for the Office of Naval Intelligence. He's come to ask about Jerry Dantana's investigation into Genoa. Charlie doesn't disclose any details, but Shep alludes to the use of chemical weapons. He hands over a helicopter manifest for Operation Genoa. Charlie realizes the document lists a euphemism for sarin gas.

Maggie waits for an email containing the 911 call from Trayvon Martin's shooting. The file downloads excruciatingly slow while Jim hovers over her desk. Maggie compliments Hallie's writing, but insinuates the media's outrage about Sandra Fluke, including Hallie's column that was picked up by the Huffington Post, is phony and overhyped. The interesting angle isn't sexist white men like Rush Limbaugh, Maggie says, it's the stigma against sexually active women.

Jim gives Maggie some unsolicited advice, telling her to be careful about going out after work. He can tell she's been drinking and wearing the same clothes days in a row. Maggie maintains the only thing Jim has a right to comment on is her work performance, which has not suffered.

When the download finishes, Maggie edits the 911 call. The show airs her cut, but when Neal transcribes the full tape, he realizes Maggie botched the editing job. Jim disciplines Maggie for the mistake. She pushes back; the error only happened because she was rushing and she doesn't want to hear it from him, when he gave away their Romney interview. Eventually, she admits that she's afraid to sleep alone, so she goes out.

Mac bumps Jesse's segment so the show can air the unedited 911 tape. Angry that he won't be on TV, Jesse calls Mac "a bitch." She tells him off for exploiting a gay teen's suicide to get his 15 minutes. Looking at Will on the monitor, Mac says she did Jesse a favor; seeking validation from a TV audience isn't practical.

Neal unblocks the phone number from the man claiming to be in Syria only to find it's a hoax. Mac hops on their line to explain the only attention the couple will be getting is from the police officer at their door.

Neal informs Don that World Net Daily has reported that Solicitor General Shimon Weingarden spoke to "The Righteous Daughters of Jihadi Excellence." Don realizes a dry joke he made has been published as fact. He leaves multiple messages for a WND reporter, and finally gets ahold of an editor who insists the story is legitimate. Don loses his temper, but Sloan cuts him off and suggests that Neal write up the real story.

Sloan leaves the office and seeks out her ex, Scott, in a business meeting. She asks to speak with him, beats him up, and snaps a picture. He tries to follow her out but Don stops him.

Mac briefs Will on the new segment. He explains that when he called to leave a message, his father had already died. The show goes back on-air and Will is silent for several seconds before announcing: "Well, I guess it's just us now." He finishes the broadcast.