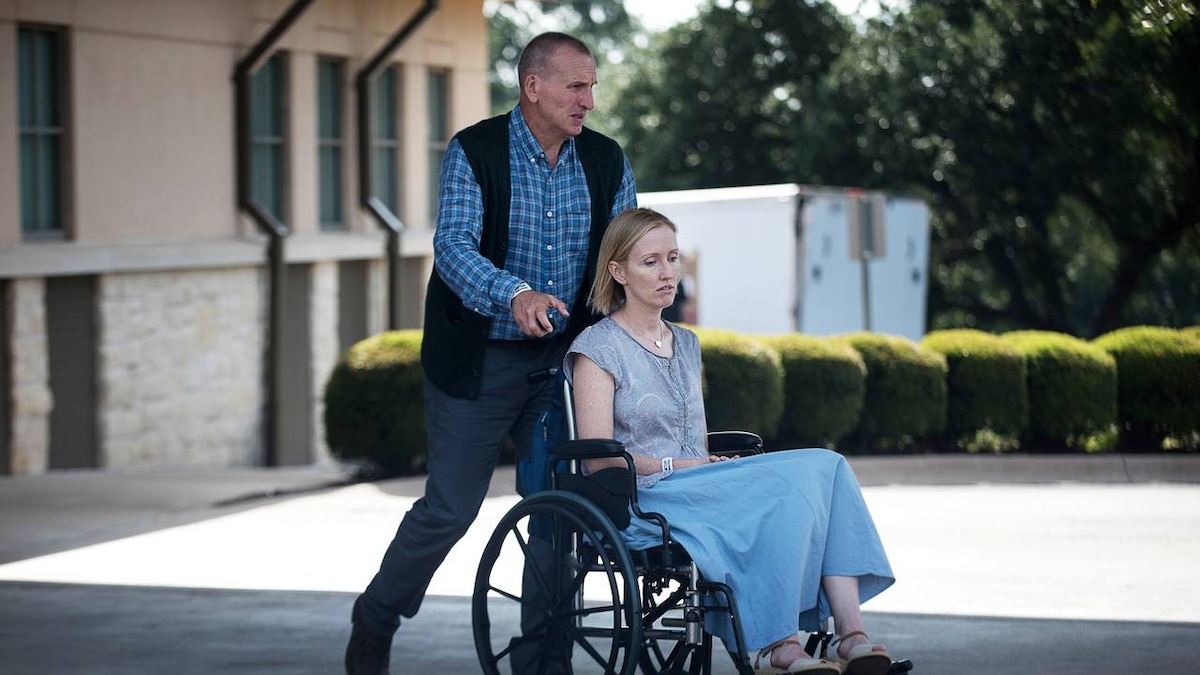 No Room at the Inn

During breakfast, Matt Jamison reviews video footage of Mary sleeping the night before. He then gets her ready for her day. That night, he sets up the video camera on her night table, and in the morning, repeats every action from the day before. Mary remains unchanged. In bed one night, Matt finally cracks. He tells Mary that he's been doing everything exactly the same as the day she woke up and he doesn't understand why she won't wake up again. He demands a sign from her that she's listening, but Mary remains unresponsive.
The following morning, Matt drives Mary out of town to a doctor's appointment. Though he can barely afford it, Matt has ordered an MRI to see if there's been a change in Mary's brain activity. He does not tell the nurse that Mary woke up.

Matt accidentally drops his cellphone in the toilet at the hospital, ruining it. On his way out with Mary, a nurse stops them and insists Matt come back and discuss Mary's results. Once back in the building, a hospital lawyer asks Matt to sign a waiver. As Matt failed to inform them that Mary was pregnant, the doctor administered contrast dye for the MRI, and the hospital insists he accept liability. Matt is elated by the miraculous news, despite the lawyer's implication that Mary could never have consented to sex. Matt rushes to get his wife back to Miracle, certain that the town will ensure the baby's survival.

On their way home, Matt pulls over to help a man whose car has broken down. With his phone out of commission, Matt offers the man a ride back to town. The man spots Matt's Miracle wristband, and when Matt turns to say hello to the young boy in the backseat, the man hits Matt in the head with a wrench. He steals Mary's wristband, and when his son can't get Matt's wristband off, the man stomps on Matt's hand until it breaks.

Matt lapses into unconsciousness and has a vision of Mary. She tells Matt that they need to hurry back to Miracle, otherwise she'll lose the baby. Matt gets up and discovers his car's engine has been disabled by their attacker, so he places Mary in her wheelchair and begins walking the five miles back to Jarden.

At the gate, Matt pleads his case with a park ranger who finally allows them inside to get replacement wristbands. Matt fails to get the bands at the visitor's center; he and Mary are not in the system and Nora and Kevin have not lived in the park long enough to sponsor them. He gets into a fight with an impatient man who is desperate to get inside Miracle for a wedding, and the confrontation becomes physical.

Kevin and John Murphy arrive to help. John confronts Matt about Mary's pregnancy, claiming that the test results fell out of her bag. John insists that Matt's account of Mary waking up isn't true because people don't get healed in Miracle. When Mary starts showing, John demands, Matt will tell everyone he got Mary pregnant in a "sad, lonely and confused moment," and that he's very sorry for what he's done. Matt appears to agree to the deal, but on their way out, Matt asks John, "You're angry at this place. What happened to you?" By way of answer, John tells Matt that he won't be able to get the wristbands after all.

Matt wheels Mary into camp, looking for a Swedish man who offered to get them into the park when they first returned from the hospital. In his search, Matt comes upon a naked man locked in stocks on top of a van. A woman asks Matt if he wants to free the man. If so, Matt has to take his place. Matt turns away and another camper helps him find Elmer, the Swede. Elmer explains that he'll need $1000 dollars to help Matt, even though Matt only has $400.

Matt spots a wooden cross and heads toward it. He introduces himself to the owner, Sandy, in the hopes that someone religiously like-minded will offer him help. She asks him several questions regarding his faith, then disappears into her trailer. She returns with a young man named Reggie and a wooden oar. She will give Matt $500 to hit Reggie has hard as he possibly can. A crowd gathers and taunts Matt's first two weak attempts. On the third, Matt breaks. He brings the oar down on Reggie so hard that it snaps in two and knocks the man unconscious.

Though Matt is short $60, Elmer agrees to help. After nightfall, Elmer leads Matt and Mary to a drainpipe that will take them into Miracle. It begins to thunderstorm, and before Matt can make it through the other side, a wave of water washes him and Mary back out.

As the rain lets up, Matt hears Nora calling his name; she and Kevin have come to rescue them. Nora explains that an "anonymous tip" to the police suggested that the missing girls were spotted outside of the park. With the police otherwise occupied, Nora is confident they won't find Matt and Mary hidden in the trunk. Kevin and Nora get over the bridge without issue, but are stopped by a car wreck on the other side. Matt recognizes the flipped car; the dead driver is the man who attacked him earlier. Matt pulls his wristband off the dead man, then sees the little boy standing in the bushes unscathed. The terrified child offers Matt his wristband.

Matt asks Nora to take care of Mary for a little while; he doesn't want to have to hide in his own town. John Murphy and a friend spot Matt and the young boy walking towards them down the middle of the road. John gets out to confront Matt, who tells him that Mary woke up their first night in Miracle, and he'll never say it didn't happen. He hands John the other wristband. "Mary found hers, so she's back where she belongs," Matt says, "and I have no doubt that she'll wake up again soon, and when she does, I'm going to come back and you and I will have a talk." He hands the child off to John before walking out of Jarden. Matt approaches the man in the stocks and tells the woman in charge that he wants to free the man. "It's my turn," he says.