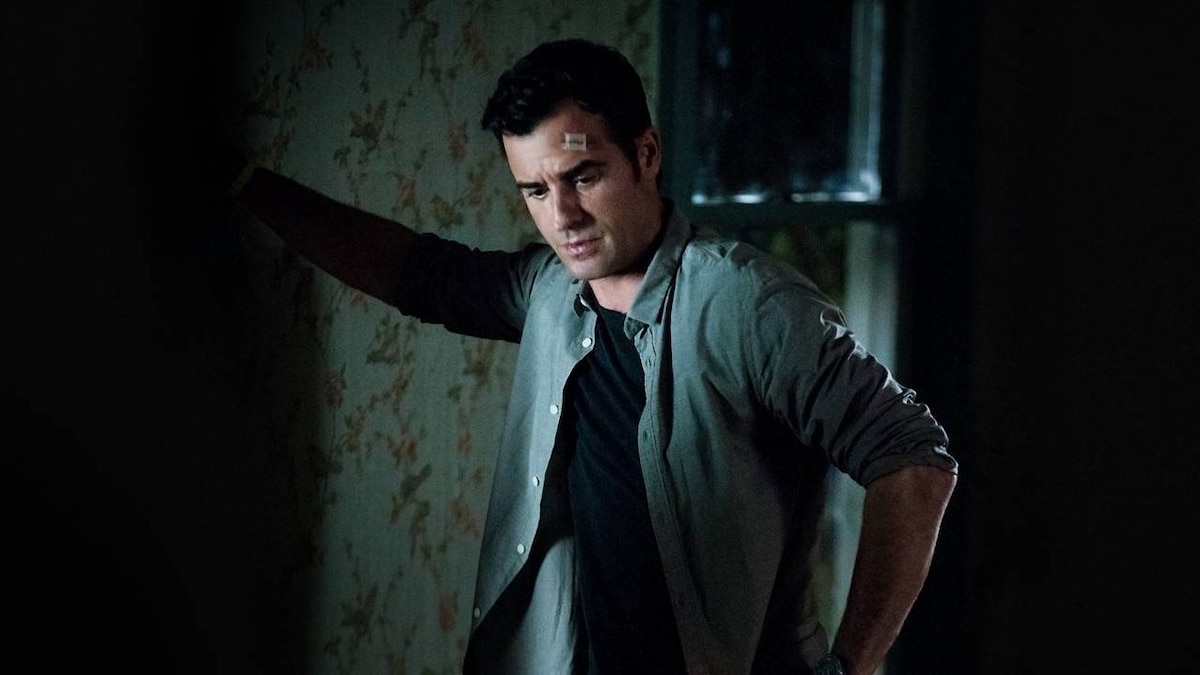 A Matter of Geography

Both Jill and Nora are smitten with the baby Nora found on the Garveys' doorstep; Jill asks if they're keeping her. Kevin looks to Nora and tells her they don't really know each other. Nora asks what she needs to know, and Kevin confesses his involvement in Patti Levin's death. In response, Nora shares a secret of her own: She hired prostitutes to shoot her. The couple is relieved that everything is still okay between them, despite revealing their darkest secrets.

Two months later, Kevin visits a laundromat. He blasts music on his headphones so loud that he doesn't realize baby Lily is crying until another annoyed patron confronts him. Back in the car, Kevin gets a call from Nora; he mixed up the time of their appointment with social services about formally adopting Lily. Music blasting, he rushes to the meeting.

A social worker conducts a brisk interview with a nervous Nora and Kevin. To their surprise, the man asks if they'd like to adopt another child -- in addition to Lily. They decline with bewilderment as the social worker hands them approved adoption papers.

Still plugged into his headphones, Kevin goes to buy a part for his broken washing machine -- and a shovel -- from the hardware store. He heads into the woods and digs up Patti Levin's corpse, then speeds by a cop in order to get pulled over. Kevin rolls down his window and tells the officer he has a body in the back of his truck.

Jill meets with Tom at a diner. She tells him that their father and Nora adopted the baby, and promises that she hasn't revealed Lily's origins to anyone. She begs Tom for permission to tell Kevin that he's okay, but Tom refuses because "nobody's okay." Jill insists that she -- and her father and Nora -- really are, and that Tom can be part of the family any time. By way of answer, Tom shakes his head sadly and hands her a letter from their mom. Jill tears it up without reading it. Tom leaves, and Jill watches as Tom gets into a waiting car driven by Laurie.

Nora gets a call from her real estate agent who tells her that a preemptive, $2.7 million dollar offer was made on her $600,000 house. Nora meets with the prospective buyers: Three young men from MIT who are studying the Departure. One of the men explains that they believe the event had something to do with geography; it's possible that Nora could have departed had she been at the kitchen table with her family. They confirm Nora's worst fear: That a second departure is possible.

At the police station, an officer asks if Kevin killed Patti. When he explains that she killed herself, the cop cuts him off. She's read Kevin's resignation as chief of police, and assumes that Patti and the Guilty Remnant's actions in Mapleton led to his quitting. "So she killed herself," the cop says with contempt. "The world spins on." She releases Kevin and he returns to his truck. Patti Levin sits in the passenger's seat. "What the f**k was that?" she asks.

Kevin comes home to find that his father, Kevin Sr. has been released from the mental hospital, and he plans to take an extended trip to Australia. Kevin Sr. admits to his son that the voices went away once he started following their instruction. Of his decision to move, Kevin Sr. explains that while he loves Mapleton, the town reminds him of everything that's missing. "I could sit around and cry about how the world f**king ended," he tells Kevin, "Or I could start it up again." That night, Kevin asks Nora and Jill if they want to leave town.

Kevin, Nora and Jill pack up and head to Jarden, Texas -- aka Miracle National Park. They arrive to find hundreds of people camped just outside of its gated border. Once inside the park, Kevin and the dog are stopped by a ranger, who informs him that that dog must be quarantined. Kevin drops off the dog, and Patti offers to stay with the mutt. "Maybe he'll f**king talk to me," she says.

At the welcome center, Kevin is stopped by a man who insists Kevin come visit him so that he can help with Kevin's "situation." Before Kevin can inquire further, he hears Nora shouting angrily at a clerk. Their rental has burned down. Nora heads into an auction and begins bidding on a house, despite her agreement with Kevin to try Miracle for a few months before committing permanently. Nora wins with a 3 million dollar bid.

While they wait for their sale to go through, the Garveys head to the glorified shed behind the Sacred Mission Baptist Church where Matt and Mary Jamison are living. The Garveys spend the night in a tent in the yard.

The next day, the Garveys see their new home for the first time and discover it's falling apart. Alone in the kitchen, Kevin and Patti have a confrontation that leads to his being hurt -- "I'm sorry I had to do that to you," Patti says, demanding that he speak to her. Nora and Jill rush downstairs and Kevin claims that he slipped in water. Jill bandages the wound on Kevin's head while Nora answers a knock at the door. She returns with an invitation to a birthday party at the Murphys' next door.

After the party, the Garveys return home. Kevin explodes at Nora after a lightbulb shorts out and bursts, reminding her that they were supposed to "try out" Miracle first -- not spend every penny they had on a house they hadn't seen. Jill asks her father not to "f**k this up" for them. After Kevin calms down, he apologizes to Nora, and the two head to bed.

Kevin wakes up at the bottom of a drained lake, a cinderblock tied to his leg. He hides from an approaching car; it's John and Michael Murphy searching for Evie. Patti turns to him. "Uh oh," she says.