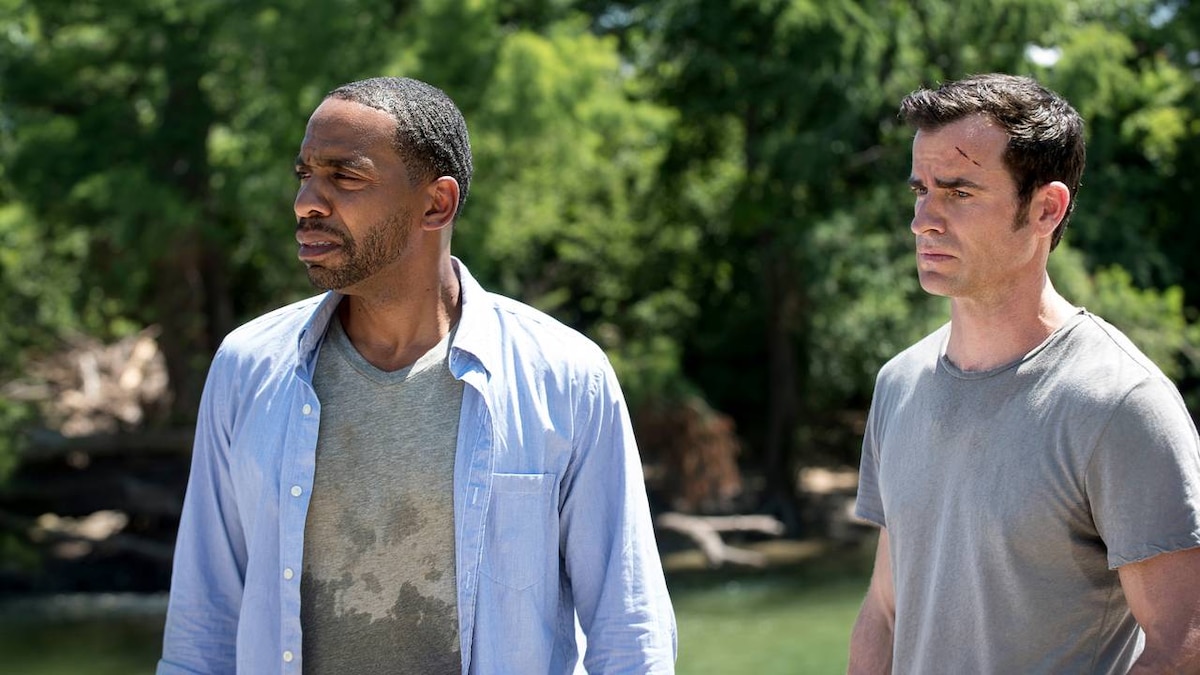 The night of the earthquake, Nora wakes to find Kevin missing. She calls his cell phone only to get his voicemail, then rushes next door. Erika reveals to Nora that Evie and her two friends never came home.

Increasingly frantic, Nora tries in vain to get news on cable or the internet. She calls 911 and demands to know if it "happened again," but before the dispatcher can interpret her question, Kevin walks through the door. After holding him for a moment, Nora heads upstairs with Lily, not uttering a word to Kevin. Patti tells him, "Looks like you have some explaining to do, sport."

After showering, Kevin explains to Nora what happened while he was sleepwalking; he believes he lost his phone in the lake. He wants to tell the cops, but Nora looks at him with scorn. "Tell them what?" she asks. "That you don't remember anything before you woke up in the exact spot where our neighbor's daughter and her two friends disappeared from?" A police officer arrives at the door asking for help in the search and rescue effort down by the lake.

Nora and Kevin arrive at the lake, and Nora instructs Kevin to climb down and search for his phone. That way, if someone else finds it, he can claim he just lost it. While retracing his steps, Kevin observes a crime scene photographer taking a photo of the muddy palm print he left on the girls' car.

After finding the kitchen faucet broken, Jill heads next door to ask for Michael Murphy's help. He fixes the leak and Jill asks why he's not out searching for his sister. Michael tells Jill that he knows Evie "isn't here anymore" but doesn't want to elaborate to someone who doesn't believe in God.
Nora leaves Kevin at the search site. She heads to a convenience store to buy bourbon and cigarettes, but discovers she forgot her wallet. An older man named Virgil introduces himself and offers to buy them for her. While he pays, he tells a bewildered Nora that he's sorry for her loss.

After everyone leaves, Kevin continues to search for his phone. Patti offers "hot" and "cold" instructions, and to his surprise, they work. As he climbs up a ladder and out of the hole, Patti shouts after him, "Don't get in that car." John Murphy pulls up in his truck and insists Kevin catch a ride with him.

John blows by Kevin's house without a word, then drives them out of town. John is pulled over by his peers from the firehouse just outside of Jarden. They insist that despite the palm print on the girls' car, Isaac is not responsible for their disappearance. "Lucky duck," Patti says to Kevin. "Looks like you framed someone without even trying." John ignores the men's protests, then heads to the motel where Isaac is staying, armed with a bat.
Hoping to diffuse the situation, Kevin tells John he used to be cop, and that he'll talk to Isaac for him. John appears to agree to the plan, but sends Kevin to the wrong room. Kevin hears an altercation across the property, and discovers that John's been shot in the stomach. Kevin wants to bring John to a hospital, but John refuses and calls Erika for help instead.

At home, Nora shares a drink with Jill. Nora asks why Jill's father sleepwalks, but Jill isn't entirely sure. Jill shares Michael's belief that his sister departed, but Nora doesn't think it's true. She tells Jill about her time in the Fraudulent Claims Department of the DSD, and how people used the Sudden Departure as an excuse to run away from their lives. "The flood happened three years ago on October 14th and the ark took on all the animals it needed," she says. "Why in god's name would it take on anymore?"

Nora heads to the church and asks Matt if Miracle is really special and safe; given the events of the last few hours, she isn't so sure anymore. Matt reveals that Mary woke up their first night in Miracle. They talked all night and fell asleep in each other's arms, but when he woke up, Mary was back to her catatonic state. "For some reason, the people in this town don't want me to talk about what happened," he says. "Every day since I've wondered if it'll happen again. But the one thing I've never wondered is if it's real."
Jill returns the wrench Michael left behind. She asks him about the orange "Verified" sticker on the Murphy house, as theirs has one as well. Michael solemnly explains that they're from the officials who confirmed the zero departures before the park took over. He starts to cry, and Jill takes him into her arms.

At the ER, Kevin tells Erika what John told him about burning down Isaac's house. She explains that the fires are a new thing; usually, John just warns people that there are no miracles in Miracle. However, Erika cites Evie's premature birth a miracle. Furthermore, Erika believes her daughter is just playing a joke, because no one would want to harm her, nor would she want to harm anyone else. "She's better than that. She is exceptional, just like this town," Erika says.

Kevin walks home, with Patti at his heels. She tells Kevin that what he and Nora have isn't love -- just "damage control," and that if he really loved his family, he would tell them about her. Finally, Kevin explodes on Patti. "Shut the f**k up!" he shouts. "I didn't tell them about you because you're not f**king here. I love my family." Patti asks why Kevin tried to kill himself, explaining that suicide isn't the action of a man who loves his family. Through his tears, Kevin insists that he doesn't want to die, but Patti remains skeptical.

At home, Nora tells Kevin that she knows he had nothing to do with the girls' disappearance, but she can't wake up alone ever again. She shows him his old handcuffs, and attaches one to her wrist. She offers him the other open cuff. "We're in this together, right?" As he and Nora settle into bed, Jill gets up and looks outside. She sees Michael scraping the 'Verified' sticker off his home.