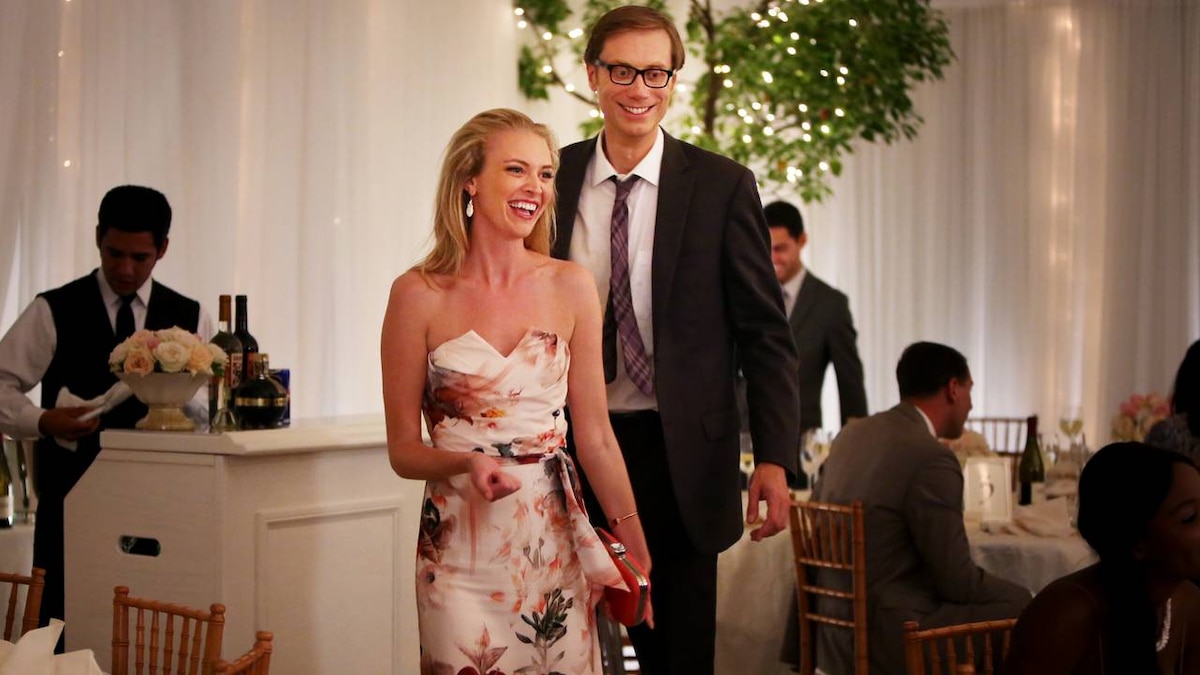 Jessica's audition for a network pilot takes a turn when her nerves get the better of her. She steps into the waiting room to get some air where she runs into Amelia, who does nothing to help her focus.

Jessica, Glenn and Stuart arrive at the wedding ceremony for Stuart's former tenant Carrie. Jessica is stressed out while she waits for news about her audition. She decides that if she doesn't get this part, she'll consider quitting acting.

After vows are exchanged, the group moves to the reception, where Stuart is made giddy by the prospect of a table of beautiful single ladies. He strides up to his table only to find an older group and a younger couple with a boisterous young child. He notices table 4 across the room, filled with beautiful women. He joins the receiving line to ask the newly married couple and about his seating assignment. Clearly annoyed, the bride instructs, "Wherever your name card is, just sit there."

Stuart immediately moves his name card to table 4. Shortly thereafter, Carrie sends him back to his correct table, where the young boy is relentlessly smashing his spoon against a plate. When the child spills soup all over Stuart's shirt, he loses his temper, relegating him to eat alone at the gifts table.

Jessica spies an esteemed playwright, Nicole Mortimer, from across the room. Glenn insists on introducing her and Jessica explains to the woman that she's shifting her focus from acting to writing, specifically her web series "Descent into Madness."

After Nicole offers to screen the project, Jessica decides to take her up on her offer during dinner. She ambushes Nicole's table, iPad in hand, and suggests they view it right there and then. Nicole is tight-lipped about feedback and Jessica pushes her to comment. Finally, Nicole admits she found the series "overwrought."

After dinner, Stuart spots Kimberly. He says hello and they engage in some less than intellectual conversation. As the night wanes on, Kimberly suggests an afterparty and Stuart offers up his room. He rushes to get ready and she saunters in much later. Just as Stuart pours them both drinks, Kimberly's friend Paul arrives, who she invited unbeknownst to Stuart.

Stuart's hatred of Paul is further intensified when he suggests charging room service to the room. Paul and Kimberly order $185 worth of food, and Kimberly takes one bite of steak before she's full. When Paul goes to the bathroom, Kimberly asks if Stuart will leave his room so she and Paul can have alone time. Stuart begrudgingly agrees.

Alone with Glenn, Jessica starts panicking about Nicole's feedback. Glenn's attempt to be supportive falls flat and Jessica leaves their room, only to run into Stuart. He recounts how the night with Kimberly went, and she encourages him to stop chasing after actresses and models. "There's nothing wrong with normal people," she explains. The two start dancing when Glenn interrupts with big news - Jessica got the part. Elated, she rushes out with Glenn, while Stuart returns to his room to crash on the couch.

The next morning, Kimberly wakes up Stuart and admits that Paul left without saying goodbye. "I just wish I could find a nice guy," she sighs before kissing him on the cheek and leaving. Later that day, Stuart is thrilled when Kimberly texts him an invitation to party with her that Friday.