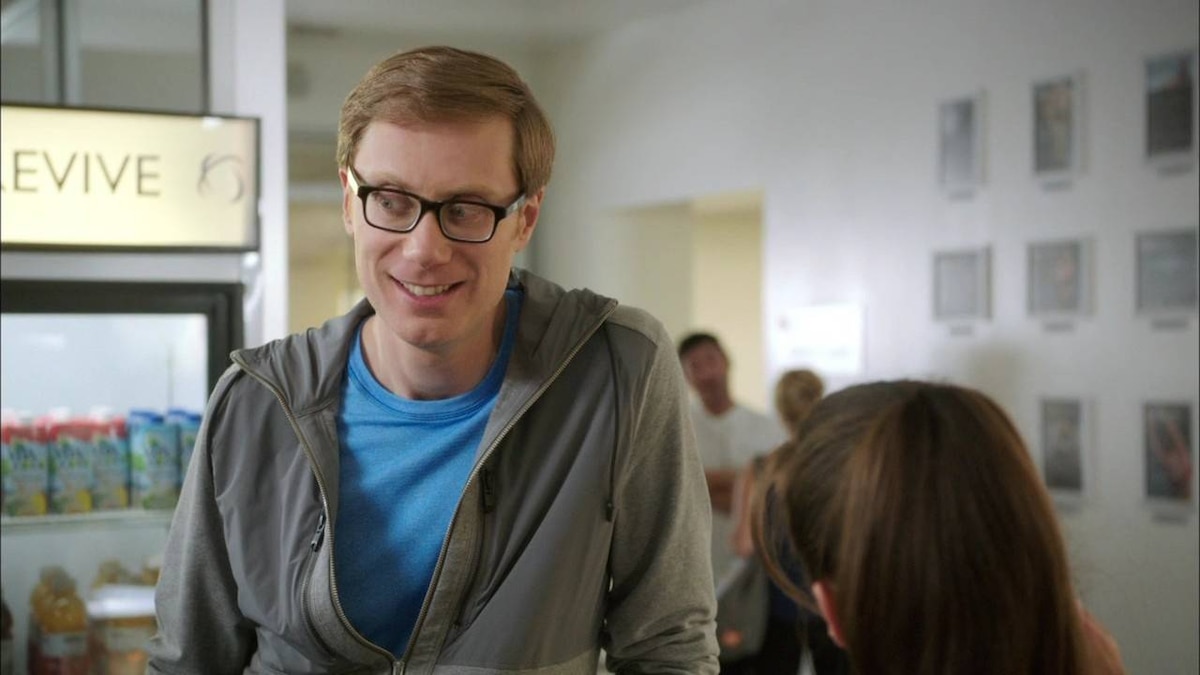 True to the nickname he's earned, "the creepy caller," Stuart unsuccessfully hits on a woman in yoga class. Jessica encourages him to go for someone who's actually interested - like Annie, a juice bar attendant who's outrageously flirty with him. While asking her out, Stuart falls into a cooler, but Annie obliges with her phone number anyway.

Stuart schools Rory on the texting etiquette of dating, including deliberately delaying your response. He's surprised when Annie replies right away and accepts his invite to Vouloir. They meet at the new restaurant and Stuart is horrified to find an exorbitant menu. His fears are realized when Annie proves to have expensive tastes. Stuart chases the waiter down several times, asking him to claim the more expensive items are currently unavailable. Despite the bill, both Annie and Stuart have a good time and set another date to play mini-golf the following weekend.

At an acting class, Jessica runs into Amelia Gordon, a younger actress who recently shot a film with Leonardo DiCaprio. Amelia alludes to Jessica's professional dry spell and asks if she's still living in an "outhouse."

After the class, Jessica confronts Glenn, her agent and lover, about why she hasn't worked in months. He makes a call and offers her an audition for a tampon commercial. Jessica initially refuses because she's "a serious actress," but changes her mind when she learns the generous rate.

Stuart is upset when Annie doesn't reply to his text message. After two more messages remain unanswered, he loses it. Ignoring advice from Jessica and Rory, Stuart drafts an email to Annie with the subject line "Who the f*ck do you think you are?" He's about to hit send when Annie finally texts back confirming their plans.

Wade falls in the shower, and becomes consumed with the fear that in an emergency, no one would find him until it was too late. He decides to implement a system of texting "a.g." shorthand for "all good," every three hours. Later at his office, Wade inadvertently locks himself inside the stairwell. Rory is alarmed when the texts stop coming, but Stuart is too preoccupied with Annie to care. Eventually, a cleaning person frees Wade.

Jessica arrives at the tampon commercial audition to find it's the same waiting room as casting for a Martin Scorsese film. Amelia shows up to read for the movie. Jessica's name is called and knowing Amelia is watching, she walks through the door for the Scorsese Project, hops out of the window and climbs in through the window next door to read for the commercial. The director asks her to leave through the door when she's done. Amelia calls her out and is smug when the casting person hands Jessica a box of tampons: "You forgot these."

Stuart is annoyed when Annie is texting throughout their date. He looks at her screen while she's in the bathroom and sees she's messaging someone named Alex. After mini-golf, he drops her off at the home of a friend, who Stuart assumes must be Alex. Stuart climbs into the bushes to sneak a peek through the window. He's discovered when his phone rings. Annie and her friend rush outside and Stuart comes clean. He begs for one more chance and Annie agrees as long as she can bring her friend, whose name is actually Joanna. Who then, Stuart demands, is Alex? He's her brother, Annie retorts, who was just diagnosed with leukemia. She adds, "F*ck off."