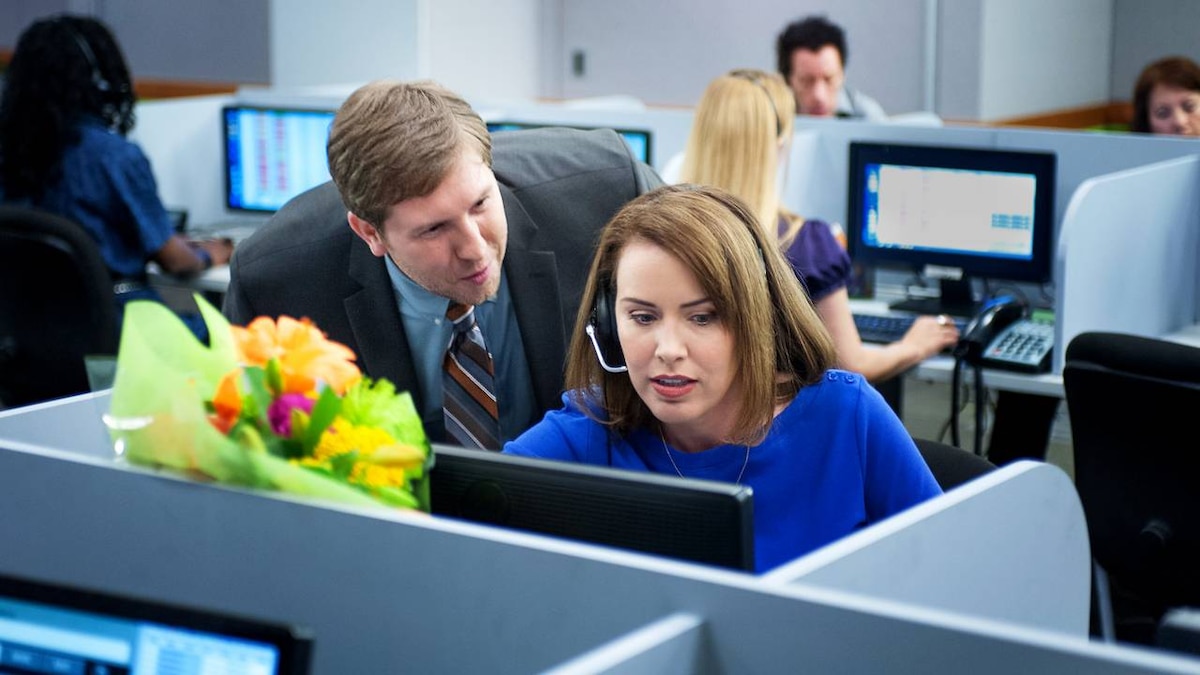 Stuart wakes up in bed with Jessica. She's annoyed he won't put her up in a hotel while the pool house is under construction, but he won't hear of it. He's already paying for a new roof. He continues his plan to avoid getting ripped off by befriending the workers, three fraternity-boy types from Long Beach. He offers them beer at 10 a.m., initiates an awkward game of catch and accidentally slices his hand open on a sheet of glass.

The guys congratulate Stuart on his relationship with Jessica, but he confesses they aren't actually sleeping together: "She would love me to, is the truth." The men suggest he needs a "slump buster," a one-night stand to end a dry spell. Stuart accepts their invitation to find a girl in Long Beach.

Wade comes over to get Jessica's advice; it's been a month since he's seen his wife Marion, and he wants to make a grand gesture to save his marriage. Jessica suggests Wade take a note from 'An Officer and a Gentleman' and surprise Marion at work. Rory agrees: "If you did that for me, I'd be putty in your hands."

Wade shows up at Marion's office, flowers in hand, and approaches her cubicle while blasting "Up Where We Belong." Marion is mortified. On her break, she sits down with Wade in the cafeteria. She hesitantly agrees that their marriage still has a chance. The next morning, Wade drops off his daughter Cassidy and Marion shares her true feelings; she wants a divorce.

Stuart takes the train out to Long Beach and is picked up by Mike, D-Boy, Lopez and their friend named Pube. The crew arrives at a club where Mike introduces Stuart to Erika, whose sexual reputation has earned her the nickname "Easy E" with the guys. Just as Stuart starts chatting with the ladies, the guys pull him away. They need him to help "f*ck someone up."

They arrive at a taco joint where Mike instigates a fight with a tough guy named Ronnie. A member of Ronnie's crew chucks a taco, which hits Stuart and covers his shirt with guacamole. Suddenly, Ronnie backs down; the guys embrace and are friends again.

Jessica is babysitting Cassidy when Glenn calls. They make plans to rendezvous later. "Is he your boyfriend?" Cassidy asks. Jessica can't give a clear answer and starts questioning the situation. Glenn comes over later that night, and Jessica initiates a conversation to define the relationship. She doesn't get the answer she hoped for; Glenn evades any notion of commitment.

The group returns to the club. D-Boy offers Stuart some cocaine, and at Erika's urging, he agrees to take it. The guys retreat to a bathroom stall where D-Boy snorts a line. It's Stuart's turn when there's a knock on the door. Stuart panics. He exits the stall with D-Boy and blurts out to the security guard, "I was sucking his c*ck."

The crew refuses to drop Stuart at the train station. They head to a house party, heckling Stuart all the way. When they arrive, Ronnie accuses Stuart of being gay. Overcompensating, Stuart brags about his intentions with Easy E. Ronnie is furious when he realizes that Stuart is talking about his half-sister. "Who calls her Easy E?" Ronnie demands. Stuart gives up the guys immediately and takes off for the train station on foot.

The next day, the crew wraps up work on Stuart's guesthouse. They bill him $3000 more than the estimate. Stuart writes a check and watches them drive off. When he turns around, he sees "I suck c*ck" spray-painted on his garage door.