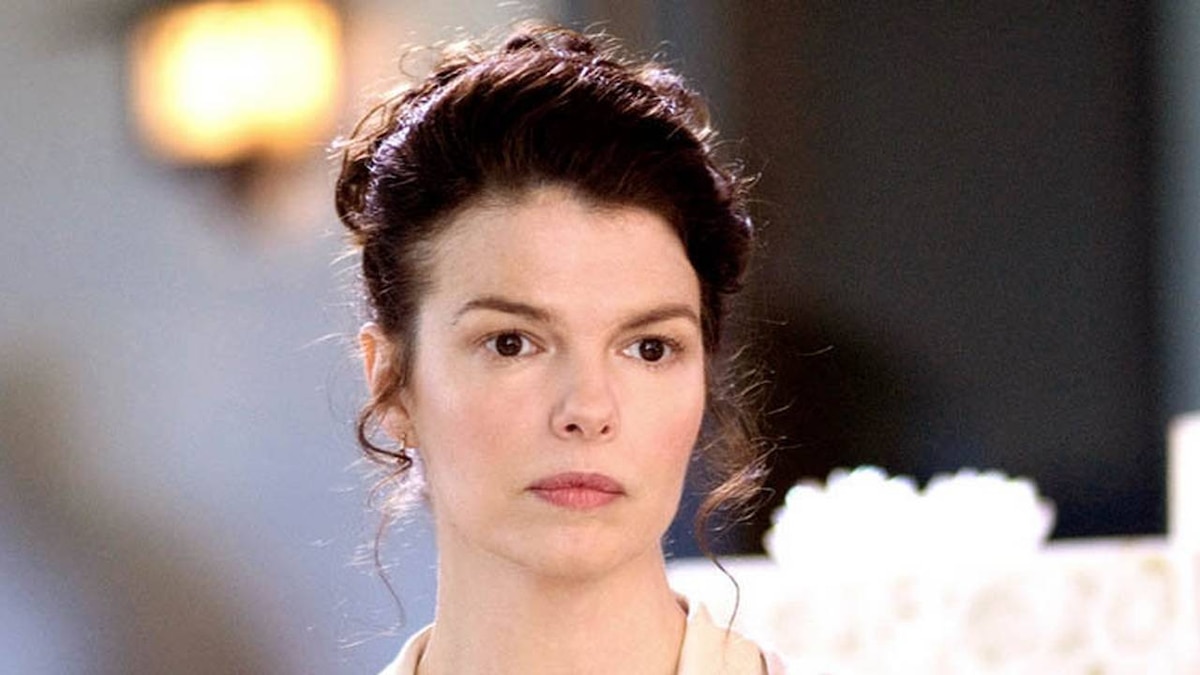 Take Me As I Am

Scanning the paper over breakfast, Barb's eye falls on her mother's engagement announcement. Recovering quickly, she tells a curious Nicki she's reading about an old sorority sister. Bill enters and confronts Nicki about the party she hosted for Kathy. Ben shoots Nicki a look, and tries to protect her: "Alby shut it down before the band played one song." While Barb wonders how Nicki financed a band, Bill's concerns are about Alby. Nicki, confident she handled the situation correctly, tells Bill not to worry: Alby was looking for Kathy. "I told him he couldn't have her, and he couldn't hurt us anymore now that we've diversified," she says. When she adds, mentioning Weber gaming "took the wind right out of his sails," Bill looks knocked out as well.

Barb stakes out her mother's house and tries to approach. When Barb indicates she hasn't and won't leave Bill- Nancy tries to hustle back inside. Unwilling to take no, Barb asks her mother to think of her children. "How can you put me in a position like this?" replies Nancy, obviously torn. When Cindy comes out, Barb heads home.

Bill meets with Alby on a back road and tries to extend an olive branch, offering his seat on the board in exchange for Kathy. "You can't vote Roman's until he passes, could be months, could be years," he reasons. Alby, making no promises, says he'll consider it.

At Scott's, Sarah picks up his cell phone and intercepts a suggestive incoming text message. When she asks him to explain, he parries, "We never said we were exclusive." Not wanting to "take responsibility" for her virginity, he shrugs it off. "It was just sex."

In the office, Ben and Bill discuss the upcoming "Pioneer Howdy Daze." Bill remarks upon the hypocrisy: every float spotlights Joseph Smith, not a single one depicts his 34 wives. Confiding in his son, he tells Ben he introduced Margie and Barb both as his wives at Wendover. Bill decides then to include Weber folk at his Pioneer party and calls Barb to invite them. No fan of that crowd, Barb resists. Overhearing, Margie offers to connect with Weber's Larry Schoenfeld: "We're having dinner this week anyway."

Barb's neighbor Pam comes by to get her opinion on surrogacy. She floors Barb when she mentions Margie is a surrogate mother. At first critical, but unable to conceive herself, Pam sees Margie's proximity a sign: "I want this so bad, I'm prepared to offer her $50,000."

From Roman's bedroom, Alby insists that Nicki get Weber back-he has evidence Bill stole the company. Nicki is uninterested, so Alby raises the stakes, "When our father wakes up, the first thing he will hear is that you are a tithe stealer... He'll believe it because you're greedy and amoral." As Alby threatens, Roman rouses, but a watchful Lura quickly re-administers morphine to his IV.

Confronted by Barb, Margie tries to minimize the story she fed Pam and the potential offer to carry her baby: "I don't want it, but if I did, I want to be able to want it." Barb's disapproval is unrelenting, but when Margie adds, "I've been a baby factory for you, Barb," Nicki snaps: "Our purpose is to benefit our family. Not every barren Sue, Jane and Sally on the block." Barb storms off to answer the doorbell-only to find more trouble on her doorstep: Penny and Sissy Marquart. Ben introduces the twins as his girlfriends.

In bed with Bill, Nicki steers him towards unloading Weber by admitting her enthusiasm has diminished. Bill immediately suspects Barb's influence, but Nicki explains that with Margie acting aggressive and Barb feeling put out, Weber has upset the balance of "one, two, three." Bill feels that they can do things their own way, but Nicki wants to adhere to the hierarchy prescribed by the Principle. "The polls have closed," says Bill, refusing Nicki's changed vote.

Barb seeks out her mother again. When she tells Nancy Benny thinks he wants to be a polygamist, the two come to a compromise: the kids will attend her wedding. Ben will join Nancy and Ned on their honeymoon, where he'll be "surrounded by exceptional people."

Chancing upon an upset Sarah, Nicki offers her own style of comfort: "Where do you and Ben find these people?" Sarah asks Nicki how she deals with the jealousy and Nicki explains, "I sublimate it because I'm serving a higher purpose." As Sarah's tears continue, Nicki offers a hug and some advice, "Hold on to your chastity, but show him what he's missing."

As Kathy vacuums, Wanda sifts sugar onto a cake. Spotting a can of cleaning powder, she steals a glance at Kathy. At that moment, Joey bursts in and tells them they need to run; Alby is en route. Wanda begins to shriek that Alby is after her, but Joey corrects her- he wants Kathy. At that, Wanda begins to taunt Kathy: "Frank's gonna get you!"

As the family cleans up supper, Nicki has a word with Bill about Sarah's situation, blaming "corrosive influences" like Weber. When she has the chance, Nicki murmurs to Barb, "I'm having second thoughts." Barb is resigned, so Nicki reveals Bill got the company by stealing it from the UEB. When Barb won't believe Bill would withhold such information, Nicki sets her straight: "It's not Barb and Bill any more. You're one of three now. We've got to unload it or we're all doomed." Unsure, Barb brings up his upcoming dinner with Margie and Larry to Bill. When he downplays it, she opts not to tell him about her plans for Ben.

Lois turns up at Joey's and is surprised to find it abandoned, clearly in great haste. Alby enters and assures her he did no harm, "but even if I did, youâ€™d never find the bodies."

Having had a visit from Bill, Scott breaks up with Sarah. As the two sit next to each other glumly, Sarah leans in for a kiss. Things start veering toward the unknown before Sarah stops short. But still not ready to give him up, she tells Scott, "I don't mind sharing you. It can work."

Barb brings her kids to her mother's wedding and a suitcase for Ben. Spotting it, Ben catches on. Nancy comes out to greet them, but she's confused by Barb's presence-it was the children she wanted there, not Barb. Cindy explains that Barb cannot attend; Ned's kids don't even approve of their mother. Despite it all, Barb refuses to leave. Ben calls his father to tell him Barb is sending him away. Already in the car with Margene, Bill makes a detour.

Seated with the family, Ben does everything he can to provoke his mother when Nancy and Ned stop by their table. To Cindy's amusement, he tells everyone he's dating twins. When Barb's niece Jennifer inquires about her needing to be re-baptized, Nancy explains: "I've told everyone you've left Bill and are returning to the church." The two retreat to a private room and Barb insists that she's sticking with her lifestyle. She asks for the same tolerance her gay Aunt Gretchen receives, but Nancy spells it out: "I can't just tolerate you. You're my daughter. I'm responsible for your eternal salvation.

By videoconference, Hollis tells Alby Bill led his women astray, calling the shots from hogtying Adaleen to taking down Roman. "He might as well have pulled the trigger," concludes Hollis. "His sins cry out for blood atonement."

Arriving at the reception, Bill confronts Barb about her plans for Ben. Barb retaliates by asking if he stole Weber. When Bill hedges with semantics, Barb challenges, "Who are you becoming?" Encountering an uninvited Bill, Nancy yields, "You've already ruined my life, might as well wreck my wedding." In his search for Ben, Bill runs into Ned. The two talk shop: Bill asks him to use his influence to lift the gambling ban in Utah, but Ned points out, it "wouldn't be as profitable if were legal."

Catching her mother and sister sharing a laugh, Barb awkwardly tries to join in. Across the room, Bill tells Ben they're staying at the party: "The Principle isn't a weapon of rebellion. Stop torturing your mother." Lois calls, convinced that Joey and his family have been murdered. Worried, Bill calls Alby, who insists he's innocent. Belatedly remembering he's left Margie in the car, Bill hurries out to her. But his explanation of the situation isn't good enough for the already seething Margie.

Now at Nicki's, Alby accuses Bill of ordering the hit. He tells her it's a matter of days for Roman, and leaves with a warning: "If you want to come back to us, come tonight. Vengeance will rain down on this family." Nicki dials Margie, frantically searching for Bill. But Margie is still having a fit about being abandoned again for a Barb emergency.

Tracking Barb down, Bill wins her back. Attempting now to cheer up his daughter, the two share a dance. "You can confide in me, I might even surprise you," says Bill earnestly. Sarah spurns the offer, telling him he lacks credibility when it comes to relationships or life. Bill is stung, but the two put on a happy face for Barb.

With the reception still in progress, the family gathers on the front lawn-Nicki has arrived with the kids. Accusations fly; they are creating a massive scene. Nicki reproaches Barb for abandoning them again, while Margie accuses her of being melodramatic out of jealousy over their dinner with Larry. When Bill joins the fray, Margie slams him for always choosing Barb first; Nicki asks him if he's responsible for her father's shooting. Cindy's demands that they leave are ignored and the fighting continues until Nancy comes out. Before heading home, Barb tells her mother, "I don't know if I'll see you in the afterlife, but I just want to see you in this life." Nancy breaks down, holds her daughter and tells her, "This is your test."

At home, Barb notices something moving in her bed-snakes.