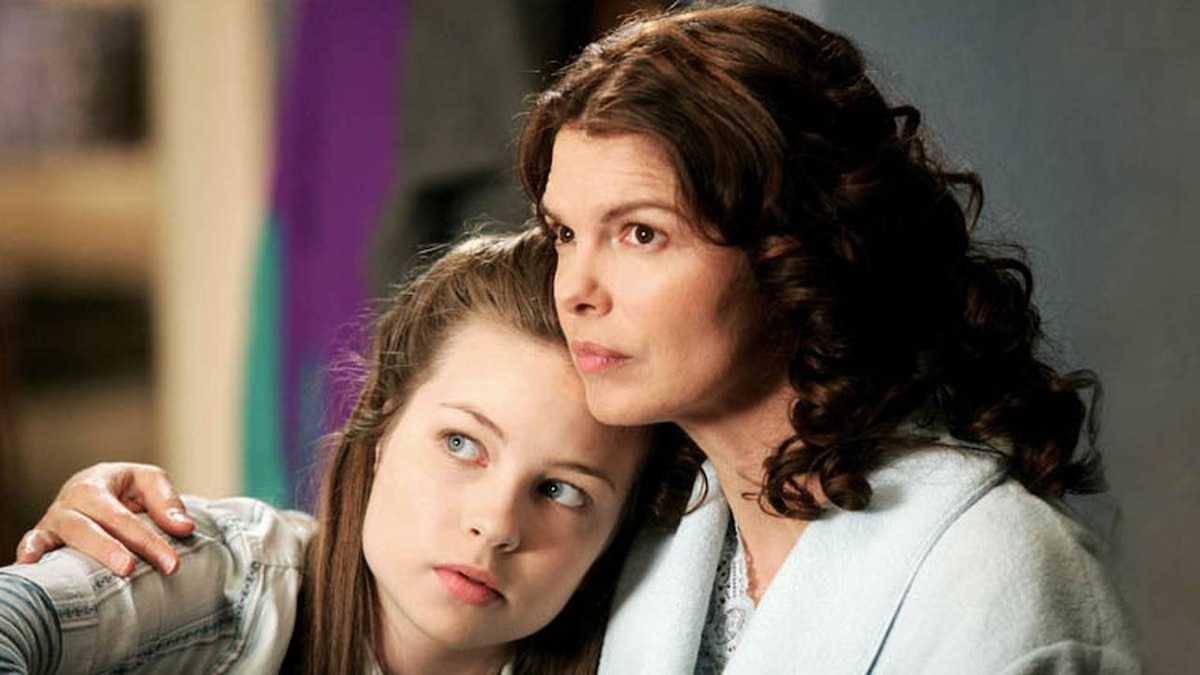 Rock and a Hard Place

nThe Henrickson house is in full crisis mode, trying to figure out what to do about their stowaway, Rhonda. Nikki's sussed out that the compound is buzzing that she and Bill helped her escape and Nikki wants to take her back. Barb wants to adopt her legally. Bill wants to find relatives to take her: "It's not safe for her here, and it's not safe for us to have her." But Rhonda has no intention of being shipped off and she threatens Nikki with revealing her secret: that it was Roman who turned Barb in. "I bet they'd hate you. I bet Bill would dump you," she taunts. Margene glimpses their argument and takes her concerns to Barb, but they're interrupted by their neighbor Pam who assures Margene that she knows she's pregnant and would never judge her for her "proclivities."

nAt the Juniper Creek compound, Roman is ready to use the tape he has of Bill's confession at Joey's trial: "The State is too much involved in our affairs. We have to cooperate." He blames Adaleen for Rhonda's disappearance, and she is stung by the accusation.

nBill and Don are discussing acquiring the gaming company when Lyle and Thomas, two Juniper Creek police, pull up with a warrant to search Bill's three houses for Rhonda. The family races to hide Rhonda. As they search the house, Lyle spits in Nikki's carrot raisin salad, hissing: "Apostate." Thomas adds: "Everyone knows why you took her." But they come up empty in their search.

nAt their drive-in restaurant job, Sarah confides to Heather about her crush on Scott and asks her friend to join them at the movies that night so it doesn't seem like a date. When Heather meets him, she is skeptical about a 28-year-old hanging out with a girl of 18 but reluctantly agrees.

nBill gets a call from his attorney Lee. The DA wants Bill at Joey's hearing because they have evidence he was involved in a cover up. When Bill visits Joey, his brother confesses about the incriminating tape Roman forced him to help with. Furious, Bill insists Joey get Wanda to confess, "She's sick Joey, she needs help." "My son needs a mother," Joey insists, refusing.

nRoman listens to Nikki's message insisting that they didn't take Rhonda, and that she didn't tell anyone about Roman's indiscretions "in the interest of peace."

nBarb and Nikki take Rhonda to a runaway shelter, and though Nikki is resistant to having to badmouth the compound, she follows Barb's lead. But when Barb leaves the room, Rhonda demands again that Nikki get her out of there. Nikki insists that the alternative is being sent back to the compound where they'll send her to re-education camp. "You just have to trust me," she insists to Rhonda, but clearly is relieved to unload her.

nBill tries to convince Wanda to confess, assuring her it's what Joey wants, but Wanda doesn't buy it. So Bill turns to Lois with the latest bad news about the tape, enlisting her help with Wanda. Lois gives Wanda her sob story about how upset she is about Joey being in jail and plants the seed of an idea about how to take care of things with the DA. "I wish I could take that gun in my glove compartment and blow the hate right out of him. Just make all this go away," she says and Wanda nods knowingly.

nArriving home, Barb is accosted in her driveway by a child advocate who wants to take on Rhonda's case. Barb tries to resist but the woman is persistent in handing over her card.

nAs the hearing time approaches, Roman and Adaleen listen to piles of tapes, trying to find the conversation with Bill. "Don't worry, we'll find it," she assures an agitated Roman.

nMargene celebrates Ben and Brynn's three month anniversary. When Brynn pulls out two wine coolers and Ben chastises "We don't do that," Margie confides to Brynn that when not pregnant, she still sneaks cigarettes. As she goes to fetch some candles for the desert she made, Margene overhears Nikki listening to a message from Roman in which he threatens to disown Nikki if she has anything to do with Rhonda.

n"You taping me now?" Bill demands when he calls Roman, threatening to turn Rhonda over to authorities if Roman doesn't testify on Joey's behalf at trial. Shocked to hear that it was indeed Bill who was harboring Rhonda, Roman redoubles efforts to locate Alby.

nAt the Henrickson's for dinner, Uncle Eddie entertains Bill's wives with stories of Bill's reckless youth. In the kitchen, Margene confronts Nikki about hearing Roman's message and accuses her of trying to give Rhonda back to her father. Nikki insists that's not what's going on, that it was Roman who exposed them. Stunned, Margie insists Nikki tell Barb and Bill - tonight.

nBarb gets a call from the shelter that Rhonda's parents are on their way from Mexico to pick her up. Margene confronts Nikki for not telling Barb but Nikki's more worried about fetching Rhonda and dumping her at a second cousins - "If my father gets her and finds out we're behind her being there, he'll crush us." When she tells Margie that it was Rhonda who put Roman up to exposing them, Margie demands the keys: "I drive faster."

nBill has asked Eddie to join him and Don at their visit to the gaming company and to see if he sees what Bill sees in the roomful of gambling machines: money. Eddie agrees. "I say we go for it," Bill tells Don. "I want our families taken care of."

nAt the courthouse, when Bill and Lee talk to the DA about a hypothetical confession and plea bargain, Bill can tell he's pushing too hard, he doesn't have the tape.

nMeanwhile, Barb is meeting with the child advocate at the shelter about Rhonda when Nikki and Margene bust in. While the advocate tries to get Nikki to talk to her, Adaleen arrives, shocked to see Nikki. As the fight between Nikki, Barb and Adaleen over Rhonda escalates, Nikki finally blurts out that it was Roman who exposed them. Adaleen denies it: "You are disowned. You are cut off. You are nameless to us. You're not welcome in our home," she tells Nikki as she storms out, leaving a sobbing Nikki and shocked Barb and Margene.

nBill calls to speak to Roman but Adaleen, home and defeated, won't put him on. He tells her he needs the tape Roman made. She takes the tape out of her purse, insisting "There is no tape Bill. Understand? No tape." Hanging up, she breaks down as she destroys the tape, smashing it beneath her boot.

nLeaving the court house, Wanda hands Lois's gun to Bill. "This is your Mother's. She was going to shoot the DA," she tells him. A stunned Bill takes the gun and throws it the garbage in a cold sweat.

nMargene confronts her neighbor Pam telling her she's not a girl with loose morals, she's a surrogate mother for a worthy and infertile couple. "You're having a stranger's baby?" Pam asks, clearly more shocked by this than by her being an unwed mother.

nSitting in Scott's car, Sarah surprises him with a kiss - which he returns. But then Alby pokes his head in the car window telling her she shouldn't be there and offering to give her a ride home. Alby strokes her hair, "You be careful. I'm watching out for you." "Who was that," Scott asks in shock "Just an uncle," she says, ashamed.

nBill arrives home, exhausted, to report that Joey was released. "No real evidence. The case was thrown out." But the wives are waiting with their own news, as Barb supports Nikki to tell Bill the whole story.

nBack at the shelter, Rhonda takes her things, and exits into the unknown night.