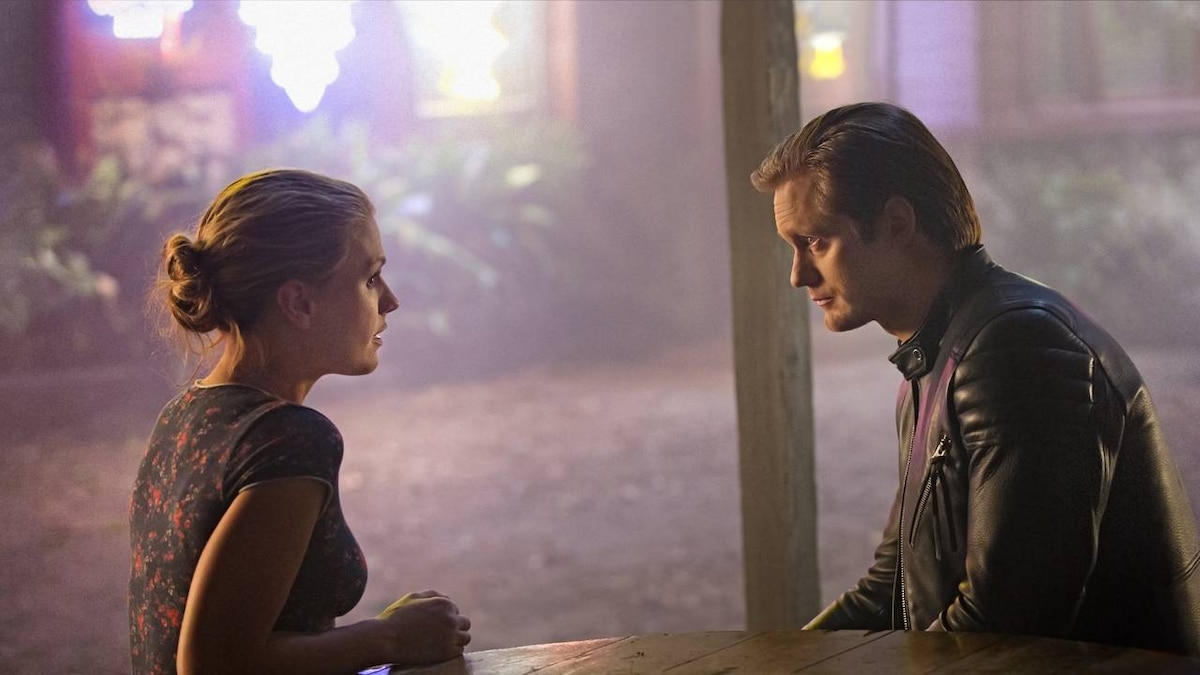 Love Is to Die

Bill explains to an incredulous Sookie and Jessica why he won't drink from Sarah Newlin -- he's already accepted his fate. "Whatever you're doing, you don't get to hide behind the word ‘fate,'" Sookie tells him. "The cure is right f*ckin' there -- she's your fate." Hurt and angry, Jessica demands Bill release her.

Sookie and Jessica head to Sam's, but they find his trailer abandoned and only two envelopes left behind -- one for Sookie and one for Andy. In his letter to Sookie, Sam explains that he loves Nicole and won't miss out on raising his daughter -- even if it means leaving Bon Temps. They're only in Chicago and he hopes that Sookie will visit after the baby is born; he reminds her that after all they've been through, he loves her, too. Sookie and Jessica head to Bellefleur's to tell everyone that Sam is gone, and Sookie pulls Andy into Arlene's office so he can read his letter in private. But unlike Sookie's letter, all Andy's contains is Sam's resignation as mayor.

At Maxine's, Brigette confronts Hoyt about him not wanting to have children -- as well as his ties to Jessica. Hoyt admits that he doesn't know Jessica but knows her maker and brought his blood to the Compton place that day. Brigette is ready to accept his explanation until Jessica shows up at the door. Jessica explains that she knows Hoyt, but he doesn't know her, and they were together until she "f*cked it up." Enraged, Brigette gives Hoyt an ultimatum -- he's free to talk to Jessica, but if he does, he walks out that door knowing they're over. Hoyt apologizes and heads out after Jessica.

Jessica explains that Bill refuses to be cured and that he released her. "I knew that you were here, and I couldn't think of anyone else I'd want to be with on a night like tonight," she says, apologizing for ruining his relationship and for being so selfish. Despite it all, Hoyt tells her that none of that matters. He asks her to catch her breath, and once she's caught it, wants her to tell him "the story of us."

Brigette, knowing no one else in Bon Temps, calls Jason and begs him to come pick her up. She explains that Jessica told Hoyt they have a past, and knowing that things are about to get even messier, Jason rushes out the door to Maxine's.

Eric shows up at Bill's to tell him he understands why Bill wants to die. Eric admits the disease gave him nihilistic feelings and attempts to talk him out of his decision. However, Bill refuses to change his mind; he says he's dying for Sookie. He reveals to Eric his dream of their black void baby -- that Sookie had given birth to Death. "That's what we are, Eric. That's all we can give her." He begs Eric to talk to Sookie and convince her to hear him out. Though reluctant at first, Bill promises that this will be the last favor he ever asks of him, and Eric agrees to try.

Jason arrives at Maxine's hoping to explain himself but gets punched by Hoyt instead. When Jason wakes from his blackout, he finds himself in the passenger seat of his squad car, Brigette at the wheel.

Two Yakuza bring Sarah Newlin upstairs, where Pam readies hair foils. "I'm takin' you back to blonde!" While she does Sarah's hair, Pam explains that they're going to sell her even after "New Blood" is on the market because one drink from Sarah completely cures a vampire. "You play your cards right, you might just become the highest paid trollop in history," Pam tells her.

Back at his house, Jason uses his charm and charisma to get the airline to change Brigette's return ticket home to the following day, free of cost. Meanwhile, Hoyt, icing his bruised fist, asks Jessica what makes her ready for a relationship if she wasn't ready before. Jessica explains that she went from a sheltered and naïve girl to a vampire overnight and needed to explore her dark side. With that all in the past, Jessica tells Hoyt he saved her life twice -- not just from Violet, but talking with him now, she sees a future for herself for the first time in a long while.

Brigette has a heart-to-heart with Jason and tells him he's a sweet, kind person who's selling himself short. Jason isn't so sure and reveals what happened between Jessica, Hoyt and himself. When he's finished, Brigette invites him to sleep -- actually sleep -- in bed with her. She wants to teach him "how not to have sex with somebody." Meanwhile, Hoyt and Jessica rekindle their romance by making love.

Eric finds Sookie outside of Bellefleur's and convinces her to allow Bill to "call on her." Eric "flies" her home, and Sookie invites him in. His earlier conversation with Bill in mind, Eric politely bids her goodnight.

Back at Fangtasia, Ginger confronts Eric about not telling her he was cured. He apologizes and tells Ginger he'll make amends by having sex with her and fulfilling every fantasy she's ever had. Ironically, the sex doesn't last very long: An overcome Ginger finishes almost immediately and passes out on the floor in a deep sleep.

In search of Pam, Eric descends into the basement only to find his progeny silver-chained to the torture table. Mr. Gus and knows that Eric went to see Sookie. In order to save Pam, Eric reveals that Sookie knows about Sarah -- and the cure.