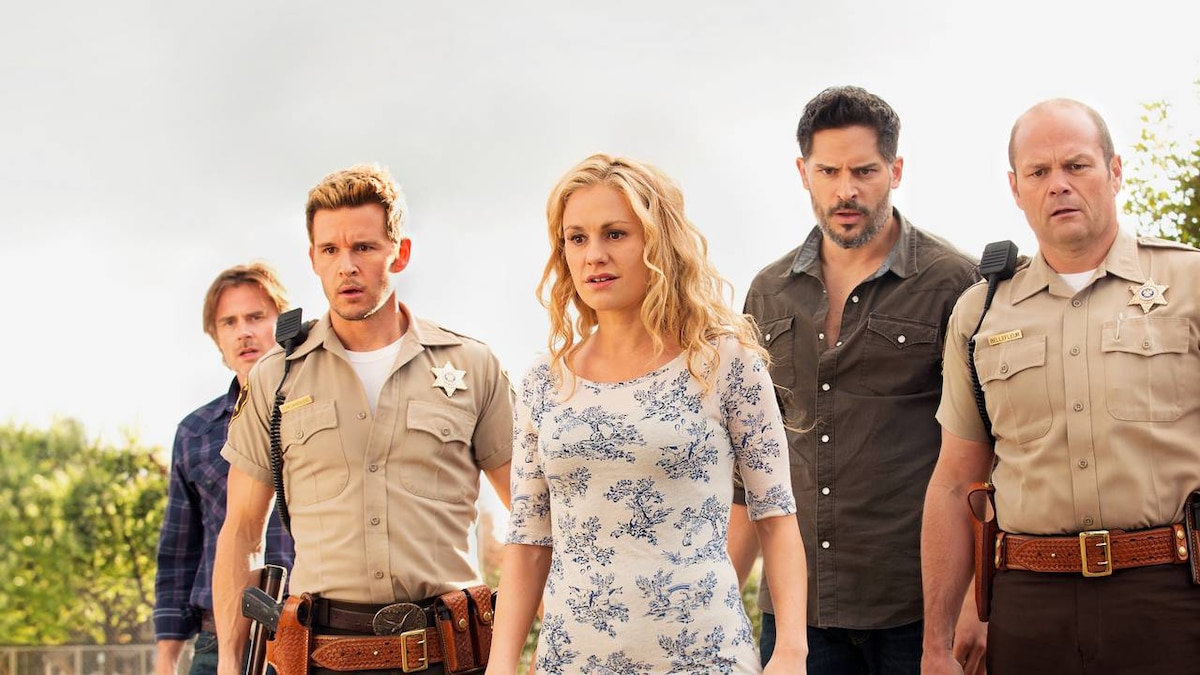 In a blood-fueled dream, Jason finally tracks Eric down at a Spanish hotel, and the two enjoy a passion-fueled hook-up. The fantasy ends when Jason jolts awake, after smacking his head against a pew in the empty church.

Andy, Sam and Jason debate over how to locate the nesting H-Vamps. Sookie interrupts to tell them about the dead girl she stumbled across in the woods the night before and suggests that once they identify her, they might be able to get answers from the last town the H-Vamps attacked. Andy agrees, and Sam, on the advice of Reverend Daniels, asks the townsfolk to keep busy by cleaning up Bellefleur's in anticipation of Arlene's return.

At Fangtasia, the H-Vamps send Betty, a former schoolteacher, to the basement to retrieve more food. When she makes eye contact with Arlene, a spark of recognition passes between them, and Betty chooses another woman. Remembering that Betty taught her and Holly's kids, Arlene believes she might help them escape.

Sookie leads the gang to the girl's body in the woods and they identify her as 25 year-old Mary-Beth Grant, a resident of St. Alice, two towns over. Sam and Andy call St. Alice's mayor and sheriff, respectively, but neither gets through. "I guess we're taking a road trip to St. Alice," Sookie announces. "We'll go door-to-door if we have to."

Lettie Mae arrives at Lafayette's to check on him -- but she's also on the hunt for more V. She explains how the V helped her communicate with Tara and that she is trapped between heaven and Earth. Dismissing her vision as a drug hallucination, Lafayette refuses to give his addiction-prone aunt anymore V, and Lettie Mae storms out.

The townspeople clean up Bellefleur's, though they're soon joined by Vince and his vigilantes, who are looking for more recruits. "There's a bigger picture here y'all are missing," Vince claims. "This town's full of vampers, has a dog for a mayor and is being preached at by a telepath." The fragile crowd agrees to turn against Sam and Andy to join Vince on his crusade. Adilyn, overhearing the crowd's mutinous thoughts, escapes with Wade.

Arlene and Holly approach Betty, though she is reluctant to help them, fearing that she'll be killed by the others. Arlene reminds her that she's going to die from the Hep-V anyway and suggests that saving them would allow Betty to die with dignity and humanity. Betty finally agrees and returns while the others take a nap. She tries to regain strength by feeding on Arlene, but any hope of escape dies along with Betty, as she turns to goo while feeding.

Sookie, Alcide, Jason, Sam and Andy arrive in St. Alice to find it completely deserted. They walk around the town, taking in the boarded up buildings spray-painted with desperate pleas for help. It isn't long before their worst fears are confirmed: "There's no one left," Sookie observes, as the group takes in a mass grave filled with drained bodies. "They either killed or took everyone."

Wade and Adilyn arrive at the police station, where she convinces Kenya that the townspeople are about to raid the outpost for weapons. Before they can hide the artillery, Vince and his expanded group of vigilantes arrives. Hoping to bring Kenya to their side, one of the women preys on her strained relationship with Andy. "What happened to that promotion Andy promised you when Bud retired?" she asks. "You've been rolling over and taking shit from Andy for years." After a moment's thought, Kenya locks up Adilyn and Wade to join the gang.

At Mary-Beth's house, Sookie stumbles across her diary, which recounts the first time Mary-Beth met a vampire and fell in love, reminding her of when she met Bill. It also details the subsequent Hep-V epidemic and vampire attacks on the town. Knowing the diary resonates with Sookie on a personal level, Alcide reminds her that what's happening is not her fault, despite what the people of Bon Temps think. On their way home, he offers to keep driving and not look back, but Sookie refuses to run away.

While cooking, Lettie Mae accidentally burns herself on the skillet, which inspires a plan to get more V. She presses her palm into the pan, burning it badly, and then goes to Willa, who is sleeping in the church's basement. Though hesitant, Willa gives Lettie Mae the blood she needs to heal. Before long, Lettie Mae has another vision of her daughter, though she's still unable to make out what Tara is trying to communicate.

Jessica senses Adilyn's fear and tries both the police station and Sookie's phone to no avail. When Andy returns home, Jessica's forced to reveal that Adilyn invited her inside, where she's been hiding in the attic. After convincing Andy that she has no intention of hurting his daughter, she asks him for his help finding Adilyn once the sun sets.

At home, Sookie slips off to Bill's house while Alcide is in the shower. "Can you still sense my fear?" she asks her bewildered former lover. "If I got into some serious shit, would you be able to feel me?"

On the other side of the world, Pam finally tracks down Eric in France's Rhone Valley. She's devastated to discover that her maker's been infected with Hep-V.