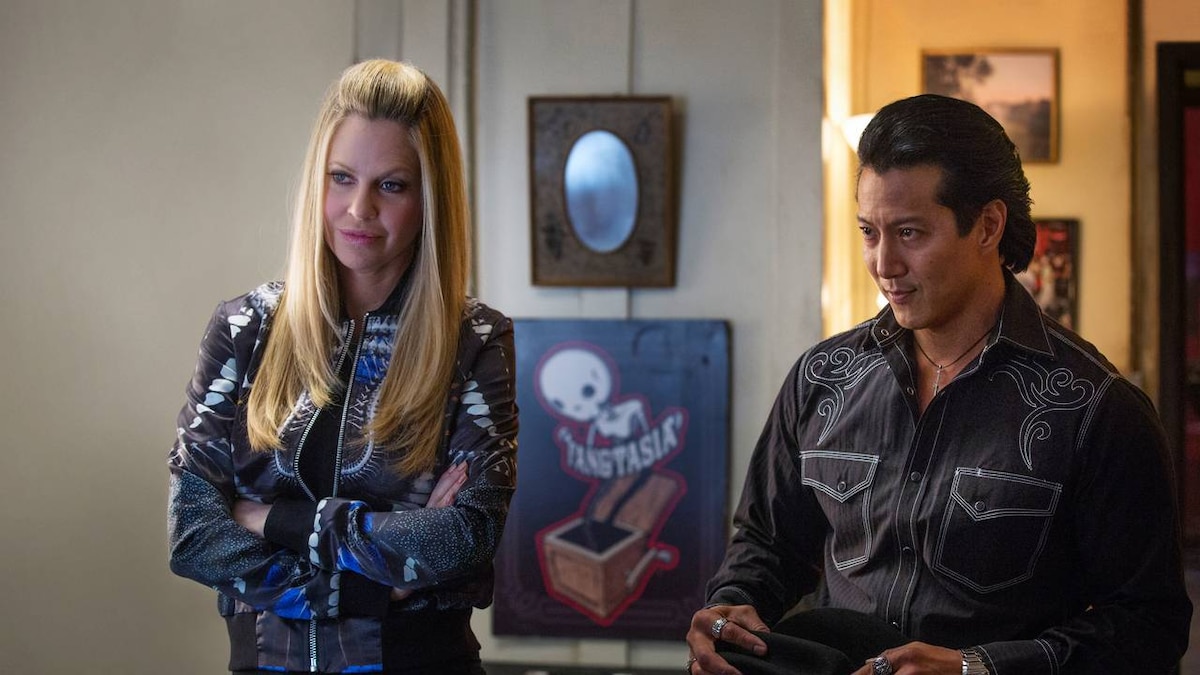 Eric, Pam and the Yakuza descend on the former Light of Day Institute. Sarah decides to give herself up, believing that she's The Messiah, and begs Eric to kill her. Not wanting to give Sarah what she wants -- and faced with Pam's threat of suicide if he does -- Eric relinquishes Sarah to Mr. Gus, but not without drinking her healing blood first.

Bill and Sookie lay naked by the fire and reflect on their long and complicated relationship. Bill reveals Queen Sophie-Anne's plans for Sookie and explains why he didn't bring her to the Queen: Sookie reminded him what if felt like to have a human heart. "But the problem was, it was only a memory," he says. "All I had was darkness to give you in return."

Lafayette and Lettie Mae continue to dig holes in the backyard of Tara's childhood home. Lettie Mae appeals to Reverend Daniels, begging him to believe in her. He accepts James' offer of blood, and joins his wife and her nephew on a V-trip. Tara brings them to a childhood birthday party, the event that led to her father walking out and Lettie Mae's subsequent alcoholism. In a drunken rage, Joe Thornton beats his wife for hiding Tara's party from him. He searches in vain for his gun, but it's revealed that Tara stole it and contemplated shooting her father before burying it in the yard. As the Reverend digs up the gun in present day, Tara apologizes to her mother for not pulling the trigger. Mother and daughter make peace, and Tara fades into the night.

Jason sits uncomfortably with Hoyt and Brigette while they go through Maxine's things. An argument ensues after Brigette mentions having children with Hoyt -- something he can't possibly fathom given the current state of affairs. Meanwhile, Jason gets texts from Violet -- pictures of Wade, Adilyn and Jessica bound and gagged in medieval torture contraptions. He leaves with little explanation, but Brigette insists on coming along to get away from Hoyt.

Back at Fangtasia, Eric and Pam learn that Yakonomo Corporation is delaying the release of New Blood, despite having the perfect antidote already synthesized. They discuss wanting a less-than-perfect product in order to keep vampires dependent on their product. With that in mind, they demand that Eric and Pam keep Sarah's existence -- and role in New Blood -- a secret.

Jason arrives at Violet's, where she greets him by throwing him down a flight of stairs. "So you do have the balls to be loyal to at least one woman," she seethes. After binding and gagging him, she throws him into her sex dungeon. Violet explains in detail the brutal ways she plans to torture and kill Wade, Adilyn and Jessica. "All I ever wanted from you, Jason," she screams, "was to live in a world with no wit, no intellect -- a world where you worship me for the perfect creature that I am!" Her tirade is cut short by Hoyt, who shoots her dead with a wooden bullet.

Sookie wakes in Bill's bed to a knock at the door. Eric has come to tell her that he's cured, but the excitement is short-lived once Sookie reveals that Bill has also contracted the disease -- from her, no less. She begs Eric for the cure. With reluctance -- and dawn approaching -- he promises to return to help Bill the following night.

Jason brings Jessica home and they talk about their complicated relationship. They agree that despite all the weird circumstances, their relationship has been the least complicated either of them has ever had. They plan to move forward with "a beautiful friendship" -- without the sex.

Not willing to wait, Sookie follows Eric to Fangtasia. Mr. Gus wants to have her killed, but Eric pretends she's "just another fangbanger" and convinces Gus to let him "glamour" her instead. Knowing she's in danger, Sookie plays along. But while pretending to be under Eric's spell, she listens in on Mr. Gus's thoughts and learns of "the cure" locked in the bar's basement.

Hoyt finds Jason at Bellefleur's and asks him about Jessica; there's something about her he simply can't shake. Jason reveals that Bill is dying, so Hoyt stops at the Compton place to leave a bag of his clean blood for Bill. Touched by the gesture and his kind words about losing a parent, Jessica finds herself falling in love with Hoyt again.

Sookie goes back to Fangtasia and makes her way back through the tunnel used to rescue Arlene and the others from the H-Vamps. She's shocked to discover Sarah Newlin in the dungeon and unlocks Sarah's memory and learns her blood is the cure. "Even as the cure," Sookie tells her, "you're still the f*ckin' problem. I'm not letting you ruin the life of one more person I love."

Sookie returns to Bill's and tells Jessica that she found a cure -- though "it's a mother**cker to explain." They go and rouse Bill, who is fever-dreaming of his future with Sookie. In his vision, he discovers Sookie cradling and singing to their baby -- but to his horror, the child is nothing but a black void.

Mr. Gus finds Eric and Pam and tells them he has to fly to Dallas but will be back before sunrise. He warns them not do "anything stupid," as his men will watch them closely until he returns. Once alone with Pam, Eric tells her they need to get Sarah's blood to Bill. As they approach Sarah in the basement, Sookie, Jessica and Bill crawl out of the tunnel. But faced with the cure, Bill hesitates, admitting, "I don't want the blood."