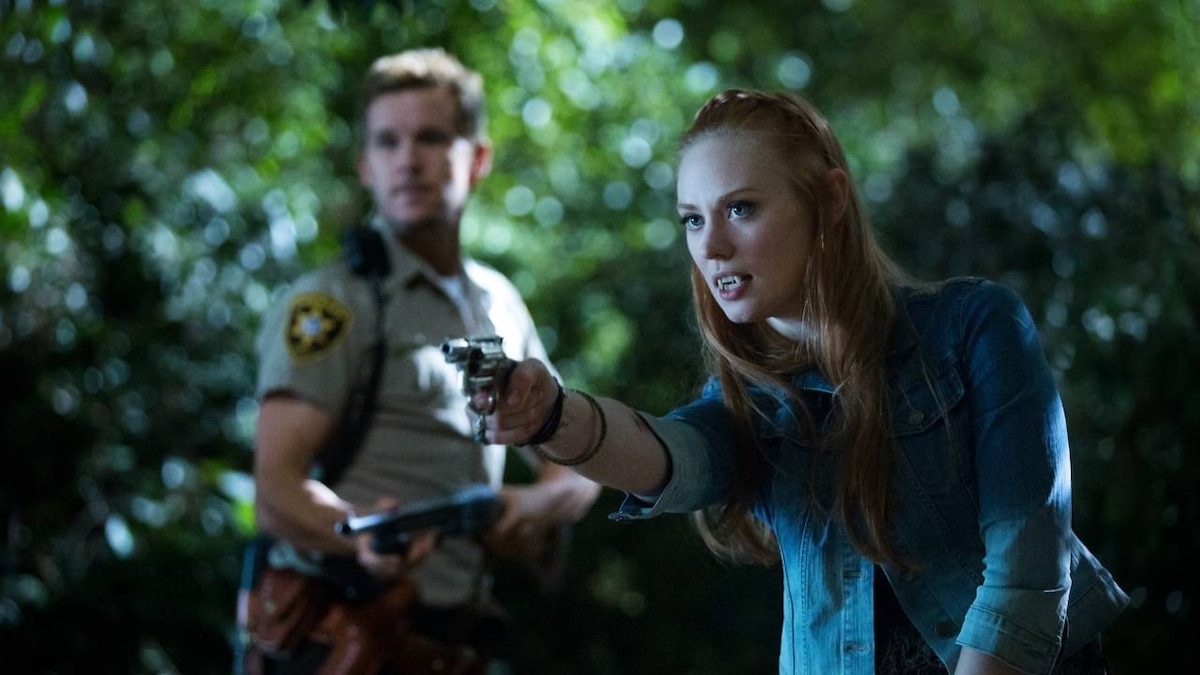 Fire in the Hole

At the Dutta Institute in Los Angeles, Guru Sanbir Dutta instructs a yoga class. He pays special attention to a sexy brunette, using the name Noomi, who reveals herself to be Sarah Newlin.

Lying in his Rhone Valley wine cellar, Eric tells Pam he's been sick for about a month. Pam begs to know why he refuses to get help. "You are Eric f*cking Northman," she tells him through her blood tears. "You don't give up, you fight." He's giving up because he's lost Godric and Nora, but most importantly, he lost Sylvie -- the one other human he loved besides Sookie Stackhouse.

In a flashback to the mid-1980s, Nan Flanagan interrupts Eric and Sylvie while they're having sex in Sylvie's father's Rhone Valley vineyard. Nan then takes Eric and Pam aside and writes them up for many infractions, including not paying taxes to their local vampire government. She also explains that she can't have Eric "publicly f*cking, sucking, and biting the vintner's daughter," as the Authority has partnered with the Yakonomo Corporation to make TruBlood, as a part of a wider effort for vampires to come out of the coffin. Uninterested in changing his ways, Eric, tells Nan to "f*ck off." Pam begs Eric to change his mind, but Eric refuses -- Sylvie wants to finish college and he won't leave her behind. "I'm as big a fan of the French vagina as you are, Eric, but come back to Earth!" Pam cries. "She's just a human."

While taking Sookie to lure out the H-Vamps in the woods, Bill explains that he hasn't been able to feel her since he was totally drained at the vampire prison camp. When she asks if he's no longer the same vampire "who did all those horrible things" to her, he says no, but he has to live with what he's done to her forever. Bill asks her to take his blood again because otherwise he won't be able to help her.

Jessica and Andy rescue Wade and Adilyn from jail, and they explain what's going on with the vigilante group, which is targeting "anyone and anything that's different than they are." The foursome heads to Jason and Violet's -- they fear the vigilantes may be after Sookie.

Sam meets with Reverend Daniels to explain what they saw in St. Alice. Willa interrupts, bursting in with a V-tripping Lettie Mae, and Daniels asks Sam to leave. On their way home, Sam and his vampire protector, Matt, are stopped by the vigilante roadblock. They kill Matt and turn their guns on Sam, but he shifts into an owl and escapes.

James drops by Lafayette's place; he's confused about what he should do about Jessica, who's been emotionally unavailable over her guilt for killing Andy's daughters. He asks Lafayette if he has any weed; Lafayette tells him no, but offers to take some pills so James can drink his blood and get high, too. Later, when James heals Lafayette's bite marks, Lafayette asks if James is "grooving" on him. James acknowledges that he has feelings for Lafayette, but he's still Jessica's boyfriend and can't do anything about it.

In the woods, Sookie acts as vampire bait while Bill keeps an eye on her from a tree. She plans to be taken to where the others are, while Bill will round up everyone to rescue Holly, Arlene and Nicole. In order to bring out the H-Vamps faster, Sookie cuts herself. "C'mon y'all!" she calls into the woods. "I taste like sunshine and flowers and I'm right f*ckin' here!"

Andy, Jason and the others run into the vigilante roadblock. Blaming Jessica for making Hoyt leave, Maxine shoots Jessica but misses her heart and hits her shoulder instead. Maxine takes aim again, but Violet charges her and tears out her heart. The gruesome scene sends the rest of the vigilantes running for their lives.

Reverend Daniels feeds Willa and tells her that because Lettie Mae struggles with addiction he fears she may manipulate Willa again and he needs to rescind her invitation. "All you look like now is a bottle of Captain Morgan," he tells her sadly.

In another flashback, Eric and Sylvie are again interrupted in the middle of sex -- this time by Pam, who's being held hostage by the Yakuza, who are on assignment from the Yakonomo Corporation. As punishment for Eric's refusal to mainstream, the Yakuza take Sylvie hostage and force Eric to choose which woman lives. Seeing no other option, Eric chooses Pam.

Back in the present, Pam asks Eric if he contracted the disease on purpose, out of guilt over Sylvie. He denies this but admits that he went about his dealings "with a devil may care attitude." She begs him not to make her watch him die, but Eric explains that the world has been his oyster for more than a thousand years, and now he's "lost his taste" for oysters. However, when Pam reveals that Sarah Newlin is still alive and in hiding, Eric rallies. "Let's go find her, shall we?"

Sarah and Guru Dutta finish having sex, and he sends her to his cellar for a bottle of red wine. While she's downstairs, the Yakuza arrive looking for her. When Dutta refuses to reveal Sarah's whereabouts, the Yakuza behead him.

A glamoured Holly bumps into Sookie in the woods -- she's been taken along with the H-Vamps as "trail mix" while they hunt for more food. The H-Vamps descend on Sookie at the same time as Alcide, Sam, Jason, Andy and the others arrive. The gang makes quick work of killing the sick vampires, and Alcide confronts Bill about letting Sookie go through with her plan. The situation goes from bad to worse when two of the vigilantes fire from the woods, killing Alcide. Jessica offers to turn him for Sookie, but she tells Jessica no. "I've been down that road before," she says, weeping.