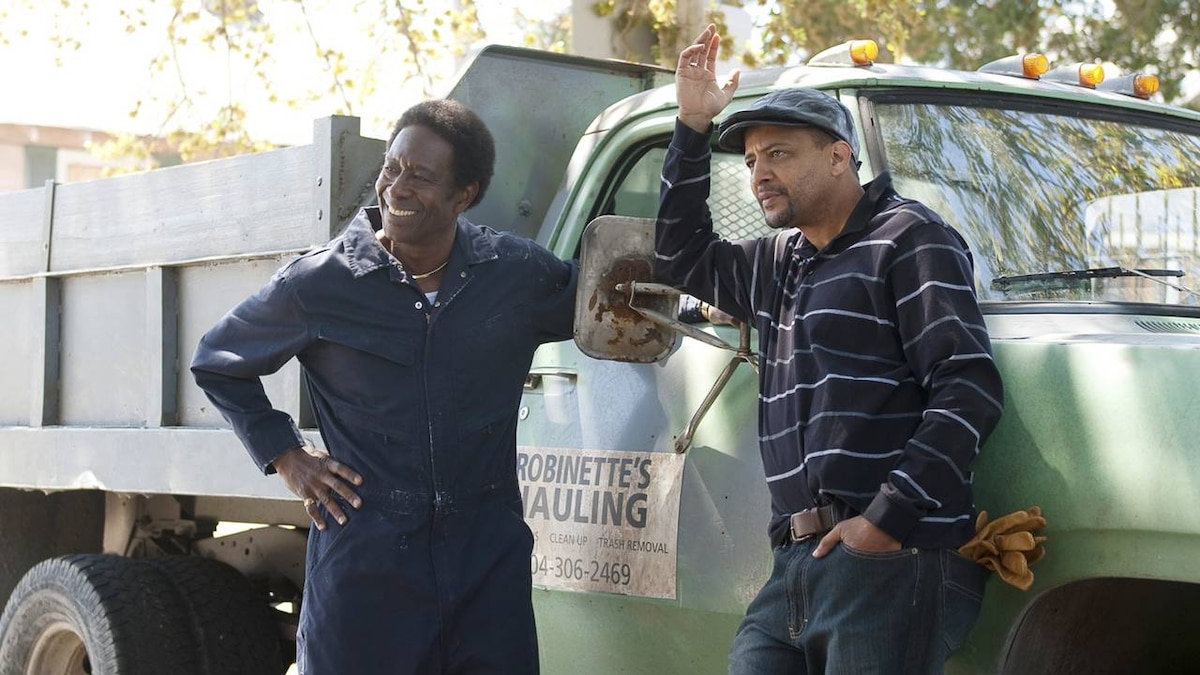 Wish Someone Would Care

Annie tells Sonny she wishes to play with other people. When Sonny questions her decision, Annie speaks up, "You're drunk or high half the time." Sonny, unsure how they can play separately and still be a couple, gives her an ultimatum: "Either you're with me or you're not." When Annie hesitates, he demands she move out.

Antoinette "Toni" Bernette questions the Cherrys about the phone call they received saying Jerome was dead. She learns they corrected the caller, but didn't pursue the matter further.

Janette Desautel gives her parents a walkthrough of her restaurant, and the equipment and fixtures which will be auctioned. She tells them she now has a kitchen on wheels and invites them to see her in action at Bacchanal.

In a meeting with LaDonna Batiste-Williams, Toni informs her it's likely something happened to Daymo in custody so the parish wanted the body to remain "Jerome Cherry," even after they were informed it wasn't him. She pushes for an independent autopsy, which LaDonna refuses to consider. "It stays wrong for us no matter what else happens," she says.

Annie shows up at friend and fellow musician Aurora Nealand's with some of her things and asks to stay for a few days.

At Poke's, Davina and Delmond Lambreaux help their father sew. Albert Lambreaux and some of his fellow Indians are anxious about having to wear last year's suits, while Darius complains he doesn't even have one to work on. Albert tells him he's not yet ready to mask.

Desautel visits Jon Cleary and his band at rehearsal to firm up plans for Bacchanal.

Davis McAlary hands out fliers to musicians and "hot women" for his record release party, including his stripper friends. At a club, he runs into Antoine and a BBQ-sauce covered Honorée, who Antoine is watching before his gig starts.

Returning to Sonny's for more things, Annie runs into him composing new pieces. He tells her to keep her key - he made a mistake. Annie agrees to meet for coffee.

At the cemetery, LaDonna and Mrs. Brooks find their family crypt in bad shape.

Albert is visited by Sgt. Maurice Thompson and Shift Lt. Terry Colson who tell him they don't want a repeat of last year's violence between cops and Indians on St. Joseph's Day.

Antoine visits LaDonna and finds out she's short $900 to fix the family crypt. He suggests she ask Larry, but she doesn't want to give her husband any more reasons to pressure her to sell Gigi's. Antoine gives her $150 which LaDonna takes after clarifying there is nothing between them. Arnie Reyes arrives to fix LaDonna's roof, estimating it will be a two-day job. LaDonna cautions she has no plans to pay him, and Reyes says there's no need.

McAlary spots Annie performing with a pianist and invites her to his celebration, which she cannot attend. "Party or not, you're always welcome," he says. At his bash, McAlary reminds his guests that at a party in the Treme, there is no stereo. McAlary's neighbor Donald requests Irma Thomas' 'Wish Someone Would Care,' and one of the strippers obliges while the musicians back her up.

At Bacchanal, Desautel cooks for the crowd with the help of some of her old staff. Her parents arrive to sample her food when it starts to pour - even though there was no rain in the forecast. The musicians unplug and take a break; Desautel and her staff try to salvage their dishes. Slipping with a tray full of food, Desautel dumps it, removes her apron, and leaves.

Antoine plays at Vaughan's with Kermit Ruffins, who comforts the crowd with the promise of more music, as the thunder bursts outside. Creighton stares at his blank computer screen.

As McAlary's party continues, Allan confesses it was him who called the cops with the noise complaint. Donald is shocked, but McAlary shrugs it off, "Bygones," he tells them.

Arriving home, Desautel discovers the electricity is out and her ceiling is leaking. She heads to McAlary's and spots the last of his guests leaving. McAlary explains he didn't invite her because she was working Bacchanal.

Sofia asks her father to take her to school later, but Toni insists she attend first period. Before the pair leave, Creighton compliments his daughter, and reminds his wife to "kick a little ass."

Waking up together, Desautel tells McAlary, "this town beat me." She plans to try her luck in New York. He tries to talk her out of it -- "Would you rather have f**king Bullwinkle floats, or an impromptu second line where you dance your ass off?" -- but her mind is made up.

A student tells Creighton she found 'The Awakening' depressing. Creighton tries to explain the end is not the end. "It is a transition. A rejection of disappointment and failure... She's embracing spiritual freedom." He excuses the class for the day.

Antoine goes to Gigi's; the roof repair is underway. He hands LaDonna another $100 from his latest gig, but she refuses it: Larry is wiring her the money.

Darius unloads building materials for Albert and Robinette at Poke's. When he's finished, the three head to the projects. In addition to the police, soldiers now guard the buildings. Lambreaux tells Darius he lost a battle, but he plans to be heard.

Creighton stops at Liuzza's for lunch. Driving into town, he parks and picks up a snack at Café du Monde. Walking around Frenchmen Street, Creighton drops a $20 in Annie's violin case as she performs Do You Know What It Means To Miss New Orleans with the pianist. On the ferry, he bums a cigarette from a fellow passenger, and moves to enjoy the smoke at the boat's stern. When the passenger checks again, there is no sign of Creighton.

The pianist offers to walk Annie home, but she heads off on her own. Sofia struggles with her homework while Toni tries to locate Creighton. In the parking lot, Creighton's car sits empty, the last car in the lot.