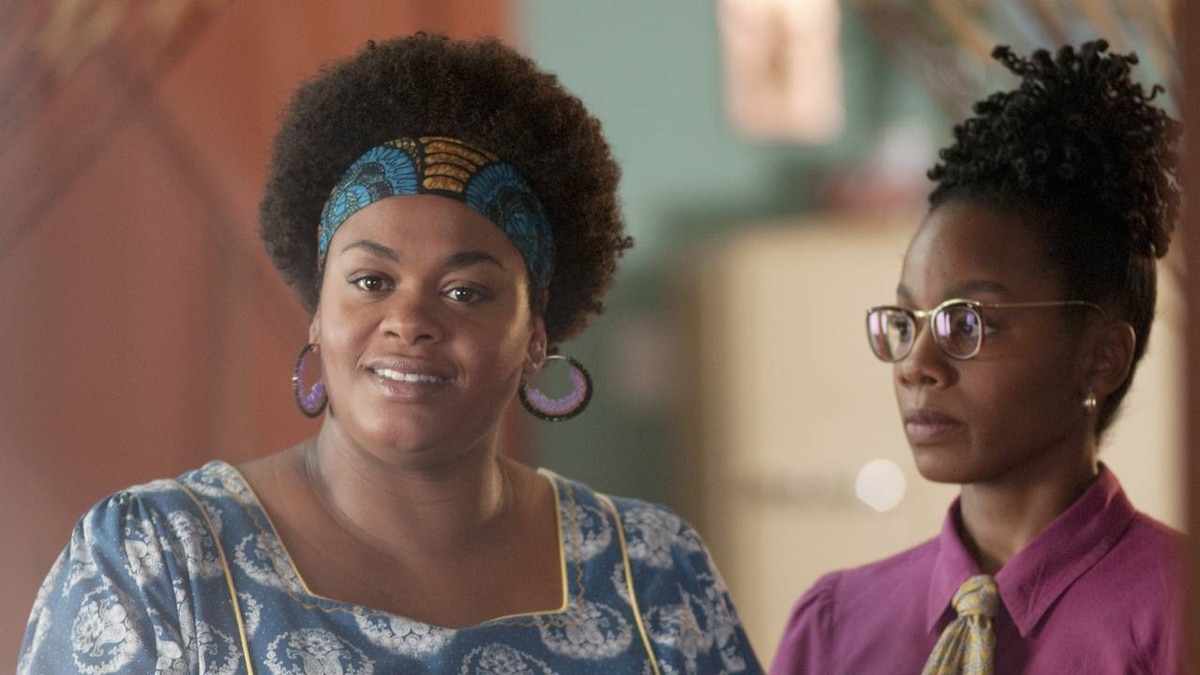 In the middle of the night on dark country road, gunmen carjack a couple's Mercedes with their child still in the backseat.

Early in the morning, the continuing Kgale Shopping Centre crime wave hits the Patel Emporium. After disarming the store alarm, a gruff Mr. Patel, an Indian émigré, is crestfallen to discover his new CCTV surveillance camera taken. Lashing out, he blames BK's Last Chance Salon and the No. 1 Ladies' Detective Agency for bringing the criminal element to the area. Backed into a corner, Mma Ramotswe reluctantly backs her new assistant detective Mma Makutsi's false claim that the agency is close to a break-through while a dubious Mr. Patel offers a 500 pula reward for the "capture of these felons."

Celebrating Grace's promotion, BK offers to give her hair a new look.

At the office, a distraught Mma Pekwane is convinced that her husband's new Mercedes Benz is a stolen car and doesn't know what to do. Brought up to be honest and above board, she's still horrified at the idea of going to the police or informing on her husband. Mma Ramotswe suggests a cup of bush tea will help give them the proper prospective on how to proceed.

"Before I met her, I was resigned to loneliness. Now, I cannot be happy without her." At the Speedy Motors garage, Mr. Patel visits Mr. JLB Matekoni for the installation of his car's new "satnav" (satellite navigation system) and to find out what his friend thinks of Mma Ramotswe's detective skills. When JLB's approval of her gets a bit wispy, it's apparent he's smitten. To win her, Patel insists Botswana's best mechanic must move into the modern age, taking a high tech approach which is "targeted and effective." Matekoni must press his case, just like the matter-of-fact businessman Patel had done with his wife.

Sipping her tea, Mma Ramotswe hits upon the satisfying idea of re-stealing Rra Pekwane's stolen car and returning it to its rightful owners, just as Grace proudly shows off her new hairdo with hot pink ends sitting atop her head.

Seeking information and help with Pekwane's stolen car case, Precious drops in on a jumpy JLB. Going with Mr. Patel's advice, he awkwardly claims to have a new 'hi-tech' gadget for identifying the hidden serial numbers etched into the cars stolen from South Africa.

That night, outside the Pekwane home, the stolen Mercedes sits. As the chained guard dog sleeps, JLB shimmies his way underneath the car and reaching for his notebook, accidentally turning on his "high tech" gadget, which is actually a transistor radio. After quieting the radio, and an angry Rra Pekwane quells his barking watch dog, Rra Matekoni escapes detection. With the serial number written down, he climbs into Precious' little old truck. When the engine won't start immediately, a frayed JLB snaps and decides it's time to scrap it for something more modern.

"I would not want to run, before I can walk." With the agency not yet earning enough money, Mma Makutsi agrees to maintain her secretarial duties while Mma Ramotswe promises to assign her novice assistant a few smaller cases to get her acclimated to her added responsibilities.

With Grace taking notes, local butcher Rra Badule tells the two detectives of his fashionable wife who found an unusually generous charity organization to pay for their 10 year-old son's private school education. He's very proud of his son's success in school and is delighted he's getting such a good start in life. The problem is Badule suspects his wife is cheating on him. And he cannot find peace until he knows the truth.

Over the lunch hour, Rra Matekoni comes home to a kitchen table still cluttered with breakfast's dirty dishes and his overly-sultry housekeeper parading around with top of her dress unbuttoned. "Every day the same," he mutters with disdain at the glop set in front him. At Mma Kefilwe's café, Mma Ramotswe assigns an elated Grace her first investigation. Her job will be to follow Rra Badule's wife with the assumption that their client is correct - Mma Badule is having an affair.

Mr. Matekoni's assistants, Charlie and Fanwell, convince him to join them for happy hour at the Go Go Handsome Man Bar. They promise him word will get back to Mma Ramotswe that he was out cutting the rug with the ladies, and thus make her jealous. Completely uncomfortable, JLB's monosyllabic responses make one particularly eager woman confuse him for a ruthless man of action and mystery.

Meanwhile, Mr. Patel has Mma Ramotswe over to his house. He wants to know the name of the boy he suspects his 16-year-old daughter is seeing. After showing the detective photographs of his children - his twin daughters whose husbands work for him and his orthodontist son living in Durban - he calls Nandira the final piece of his jigsaw puzzle. Fraternizing with boys is not a part of his plan for her. Instead, once she has finished school, he will arrange a marriage for her. When Precious questions the wisdom of spying on one's offspring, Mr. Patel retorts that "a childless woman must take the word of the one who knows better."

When her uncle drives off leaving her stranded for her surveillance, BK happily volunteers to be her driver. With bush tea and mopani worms to snack on, they stake-out the Bedule home in BK's VW convertible Bug and Grace grows annoyed by BK's copious note-taking and detective movie references. After her son and husband leave for the day, Mma Badule drives off and the two gumshoes follow her to a well-to-do neighborhood with gated manses lining the street.

Just across the border into South Africa, Mma Ramotswe meets with her old friend Billy Pilane of the South African Police Service. Eager to make an arrest, Pilane complains of society's complacency and code of silence after Precious tells him she promised Mma Pekwane that nothing would happen to her husband. To prove the severity of the case, he hands Precious an article detailing the terrifying story of the carjacked couple's young boy being dumped on the road when he was discovered still in the backseat. Pilane lightens up when she says her client only wants to do the right thing and is not interested in any money. Much to her relief, her old childhood friend tells her the boy was unharmed before he affectionately kisses her cheek goodbye.

"This is where she comes to rest. This is where she comes to lie down." Mma Badule appears at the bedroom window as her lover embraces her and Grace snaps some pictures before the amorous couple draws the blinds. Seeing two housekeepers outside on break, Grace fools them into revealing their boss' secret life: he's got a wife here in the city and a wife out in the country. When Grace's odd behavior makes them suspicious, the two maids fear they will lose their jobs for talking out of turn. And as they grab at her, Grace makes a run for it, jumping into BK's already moving getaway car.

At Nandira's school, Precious' truck backfires and dies as Mr. Patel's daughter laughs with her girlfriends.

"Just because a case has awkward aspects - that is not always a reason to stay clear of it." With Mr. Patel's 'satnav' successfully installed, the shop owner asks the forlorn JLB how things are going with Mma Ramotswe just as Precious walks into the garage. JLB's mood worsens when she tells him her truck broke down after she'd been across the border on her carjacking investigation. Patel, picking up on the awkwardness between the two, offers her a lift home. On the way, they discuss his case. After following his daughter and her schoolgirl friends back to the Patel home, the detective suggests he ought to trust his daughter just as her father did her. But when Patel points out she then married Note Mokote, she agrees to remain on the case.

"I may have to convince him to be happy in his lot." At the office, convinced that the maids are after her, Grace has changed her hair again, and replaced her prescription glasses for sunglasses. She doesn't know how to proceed with the case. If she tells the truth about the butcher's wife, Rra Badule will be broken-hearted, his son will lose his education and the maids will lose their jobs.

Once the evening's plans for the Pekwane case are arranged, and she's fortified by a pot of bush tea, Precious Ramotswe listens to Grace's blow-by-blow account of the day's events. Examining the surveillance photos, she suddenly sees the nub of the problem. Mma Badule's lover is not only the boy's benefactor but his father. Mma Ramotswe realizes that whatever happens between the adults, she must first make sure the boy and his future are protected. And as JLB arrives to help with the Pekwane case, Rra Badule rings up to find out what's happening. Nervously, Grace puts him off until tomorrow.

While JLB waits with Precious' white truck in tow, Mma Pekwane diverts her husband's attention and the No. 1 Ladies' Detective drives the Mercedes. Later a relieved Mma Pekwane shows her irate husband the newspaper clipping of the original carjacking left by Mma Ramotswe. With the Mercedes delivered to the right hands, JLB takes Mma Ramotswe back to her Zebra Road home, promising to fix her beloved truck if he can.

"Perhaps another time" When once again JLB inadvertently turns on the music to his 'hi-tech' gadget, he throws off his attempts at modernity, dances over to Precious' truck and gets to work. With the job done, JLB's second attempt at proposing to Mma Ramotswe is interrupted by the arrival of Rra Badule and Grace Makutsi.

Furious at the news of his cheating wife, the butcher threatens to take his meat cleaver to her lover. But Mma Ramotswe convinces him that his wife is only with the man in order to get Budule's son a good education.

After Rra Badule leaves satisfied with the hope that one day he and his wife will be together again, the two lady detectives ponder whether they did the right thing. Affected by their conversation, JLB decides to call it a night, offering Grace a ride home. Precious asks him what he wanted to say before all the commotion but, for JLB, tonight is no longer the right time.