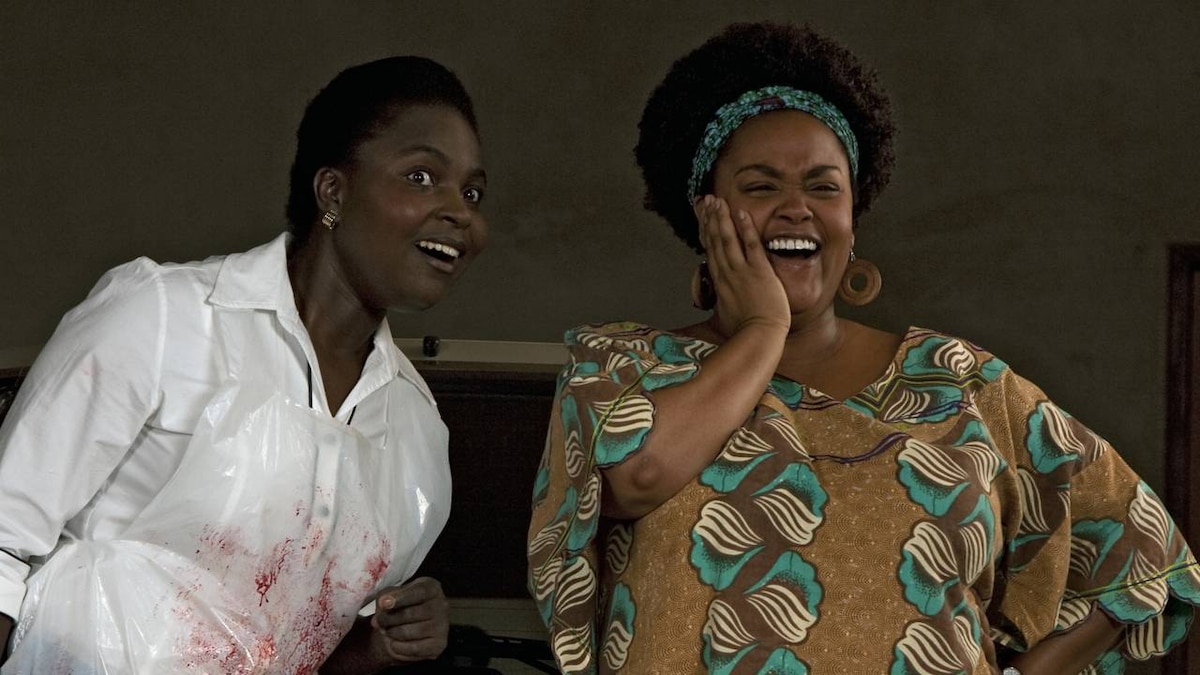 "Detective work is not all bang-bang, like in the movies." The No. 1 Ladies' Detective Agency's bills are stacking up. Even the cost of the new advertising leaflets only adds pressure to find new clients. Unfortunately, Mma Ramotswe's single case is actually a favor for Mr. JLB Matekoni and his cousin, a dental assistant who suspects her erratic boss, the Nigerian Dr. Komoti, is losing his mind. Making matters worse - as an alarmed Mma Makutsi is quick to point out - Precious hates going to the dentist.

"The good investigator grits his teeth and addresses his task with a cool and courageous hand." -The Principals of Private Investigation by Clovis Anderson As Precious' dental appointment looms, Grace tries to shoo away a dusty young boy looking for work. But after a determined and enthusiastic Wellington proves he can read, Mma Ramotswe gives him 2 pulas for passing out the agency's new leaflets and 2 more pulas for every client his efforts bring in.

Later, Precious waits in Dr. Komoti's office as Mr. JLB's niece Jinger May explains that when the moody Komoti is on an upswing, his dentistry is very good. But when he's on a downswing, his patients leave with fewer teeth and more problems than when they came in. Today, it turns out the dentist's work is quite good, and Precious is ready to close the case until Grace reminds her that she must catch him on a downswing to be sure.

"I am not a dog catcher." The agency's next paying case takes Mma Ramotswe a little getting used to. Rra Banda has lost his wife's dog Lucky somewhere outside the Pooch Parlour in Gaborone's major shopping area known as the African Mall. After some coaxing from her secretary and charging a special fee for their dog-catching services, Precious and Grace split up their search as they foot it through the market.

"Do you really want to solve this mystery, even if the solution makes you unhappy?" As the day grows hotter, an exhausted Precious notices a tearful woman holding one of Wellington's leaflets. Mma Siphambe's husband, Peter, a born-again church-going "reformed" womanizer has been missing for two weeks. Fearing he has found some young Apostolic lady "with better blankets," the unhappy wife hires Mma Ramotswe to find out what's happened. But being Roman Catholic, she claims to have only a vague idea which church group he belongs to.

"High marks aren't everything." On the other side of the mall, a disheveled and "Lucky"-less Grace crawls out from under a stallholder's table only to find Violet Sepotho smirking down at her. Her former classmate flaunts her hot-to-trot outfit and stylish hair while bragging about her great position with her great boss and her great perks. Later, still upset at being one-upped by her less-qualified fellow alumnae, the No. 1 Ladies' Detective Agency's senior secretary practices her typing skills as young Wellington times her efforts.

"You can find out almost anything about a man by reading his car." Without her papers, Precious's tail of Dr. Komoti comes to an end at the Botswana/South Africa border. But when a broken left tail light brings Komoti's car to Mr. Matekoni's Speedy Motors garage, Mma Ramotswe is convinced the deranged dentist's frequent border crossings and erratic behavior means he's an addict running drugs between the two countries. After a fruitless search for drugs, JLB, the finest mechanic in the country, swiftly sizes up Dr. Komoti's character by diagnosing his car - labeling the dentist "a greedy man who will do anything for money."

After visiting several Apostolic churches, Precious finds Peter Siphambe's congregation at the Limpopo river. As newly-baptized young women wring out their gowns, Reverend Shadrack says Peter was "taken body and soul" while assisting in the river baptisms. The reverend decided not to report Peter's disappearance to the authorities because non-believers might not find this 'miracle' credible.

Which is exactly Mma Siphambe's reaction after Mma Ramostwe returns her husband's pants and shirt but not his gold anniversary watch...or his underpants. He has definitely left her for another woman. Despite an unsatisfactory outcome Wellington gets paid.

As Makutsi returns home, her HIV-infected brother Richard sleeps uncomfortably on the sofa. He's hungry and complains he can't stomach the meager food Grace brings home. His sister quietly explains Mma Ramotswe has no money to pay her yet and reveals her self-doubts after running into Violet. He softly assures her, "you'll do better than any of them."

"A serious crime has been committed...My only problem is how to prove it." This time, Precious is prepared for the border crossing as she follows Dr. Komoti to his other office in South Africa. Seconds after the dentist has pulled into his garage, Precious peeks through the window to find him butchering a wailing patient. The alarmed detective stumbles over a potted plant, alerting the Komoti office of an intruder. As she peels away, the dentist and his identical twin try to cut off her escape.

Back at the Kgale Hill shopping center, after an eleven-pula-richer Wellington explains how he found the lost and hungry Lucky, Mma Ramotswe suddenly understands what happened to Peter Siphambe. Before she heads out for some target practice, the detective instructs her secretary to contact the records department of Dr. Komoti's university and make a final appointment with the deranged dentist.

With her father's rifle skills firmly embedded in her, Precious drags Grace and Lucky to the spot where Siphambe vanished. Tying Lucky up near the river bank, rifle at the ready, Precious and Grace wait into the night. Suddenly, a giant crocodile emerges from the water ready to make Lucky his next meal. With one crack shot Precious brings him down, then pulls out a kitchen knife, grits her teeth and guts him. Ignoring the stench, she reaches inside the stomach and finally finds Siphambe's goo-covered gold watch.

The next day, Precious lays out her plan to trap the Komoti twins. She's adamant about not involving the Botswana authorities because the nation's people shouldn't be made any more afraid to take care of their teeth. Instead, with 'undercover cops' JLB and BK looking tough in their sunglasses, crossed arms and borrowed sports car across the street Precious tricks the fake Dr. Komoti to agree that he and his brother will never come back to Botswana again and to sign over to Jinger May their practice here. On his way out, Komoti calls Mma Ramotswe fat, igniting a furious JLB into slamming the fraud against the car and threatening to take the frightened crook down to the police station for a full confession - unless he leaves the country immediately.

When Jinger May wonders what's to stop the twins from continuing their scam in South Africa, Precious promises that her good friend, Billy Pilani of the South African police will be waiting for him at the border.

"Time is a great healer" "Not always." After Mma Siphambe leaves the agency a satisfied customer, Grace and Precious discuss their client's peculiar relief at learning her husband had been eaten by a crocodile instead of having run off with some young church tart. Precious understands how difficult it is to recover from being betrayed by the person you love.

Celebrating her first payment from Mma Ramotswe, a proud Grace tells Richard of the agency's big day and splurges on some take-out curry - her sick brother's favorite meal. Meanwhile, Precious, with cup of bush tea, listens to Note's album for a moment before switching the turntable off.