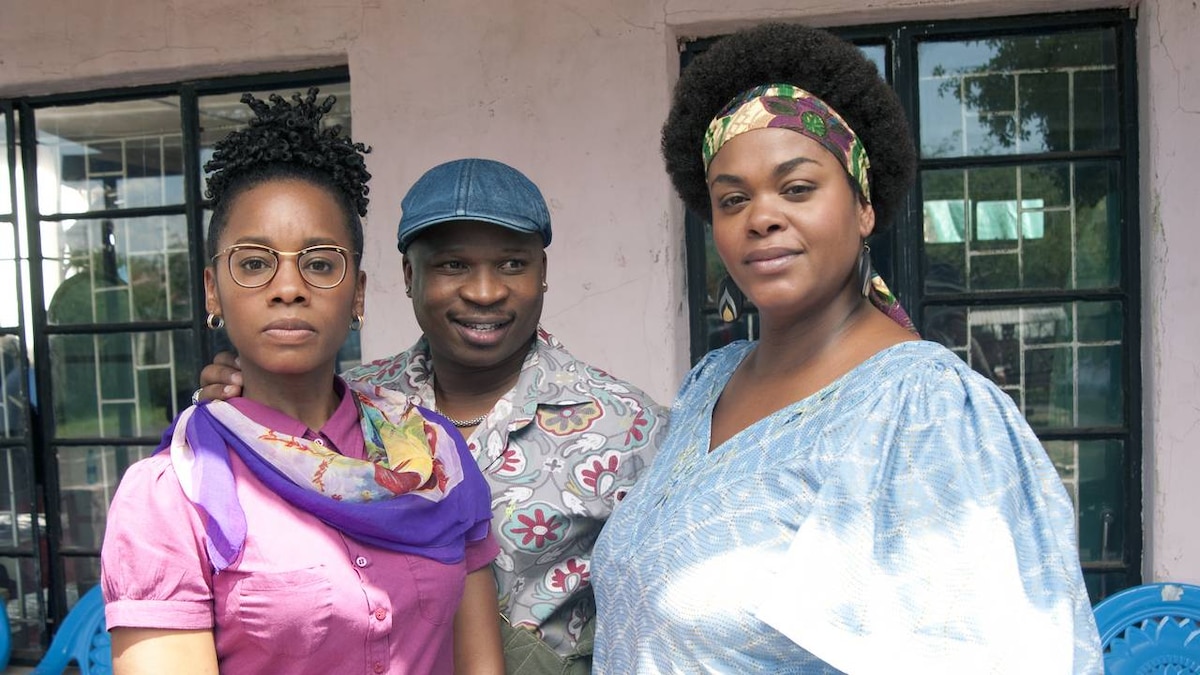 "I miss you every minute we are apart." After her morning phone call just misses Mr. JLB Matekoni, the No. 1 Ladies' Detective and her assistant detective Grace Makutsi puzzle over the news he's gone to the Limpopo River - to fish.

Mr. Patel interrupts their musings with a new development in his daughter's case. He's found a love letter written on a scrap of pink paper from Nandira's boyfriend, Jack. Without any other progress, Patel threatens to go to The No. 1 Ladies' Detective Agency's new rival - Cephas Buthelezi and his Satisfaction Guaranteed Detective Agency, whose motto is "Entrust Your Affairs To A Man!"

Meanwhile, loaded down with angling gear JLB stands at the banks of the Limpopo not knowing what to do next when an old fisherman offers to teach him.

Lured by "Ex-CID, Ex-New York, Ex-Cellent" Cephas Buthelezi's offer of a 25% discount to the ladies of Gaborone, Precious and Grace make a courtesy call on their competitor. With ingratiating charm, Mr. Buthelezi disarms them with compliments before arrogantly suggesting that the town was big enough for both of them. The ladies can do their little bits and pieces while he deals with "matters that require a man's approach, a professional detective's approach."

Undaunted by the smarmy Buthelezi, Precious and Grace convince beauty pageant impresario Two Shots Pulani to hire them instead of the untested Buthelezi. He tells them that his contests are losing sponsorship from bad publicity and the shaky morals of some of his girls. So he's invented the "Miss Beauty and Integrity" as his next big contest. It's in three days but after one of his girls was arrested for shoplifting he's got to make sure the five remaining contestants are 200% spotless. The No. 1 Ladies are to vet the women and then, much to Grace's shocked ears, Two Shots will choose who is to win.

With Mma Ramotswe committed to the case of Nandira Patel's unseen boyfriend - and her warning to avoid being negatively influenced by looks - an eager Mma Makutsi opens her investigation into Two Shot Pulani's beauty queens.

"The river is a fine companion." With nothing new on the Patel front, Precious finds JLB still away but his surly maid Florence and her paramour taking full advantage of his empty house.

When JLB's fishing mentor suggests that fishing is an excellent way to keep out of a wife's way, a lovesick JLB's unhappiness comes pouring out. Meanwhile the love of his life, Mma Ramotswe, eats alone as her concerned maid, Rose, quizzes her over Rra Matekoni's absence.

At the Makutsi apartment, Grace blames her brother's love for beautiful women for his illness as he yearns to attend Two Shots Pulani's beauty pageant. When he tells her she would make her a terrible reporter, she realizes that is how she will be able to get the girls to open up to her.

And Precious goes to bed with Clovis Anderson's detective manual while on the Limpopo, JLB lays awake deep in thought.

"I will not be judging books by their covers." The morning paper spurs the No. 1 Ladies' Detectives with a front page article about Gaborone's new professional and male detective ready to do a man's job. Determined to be effective and efficient and donning her reporter's visor, Grace interviews Two Shots' favorite and most popular beauty queen. Motlamedi Matluli asserts the only difference between this new "Miss Beauty and Integrity" theme and the past contests is the name. Plus, her integrity "looks very good in a swimsuit."

At the University gates, Grace coerces Rra Matekoni's assistant and 'professional' girl chaser Charlie into assisting her investigation. He's aghast when his endorsement of Motlamedi's and another beauty queen's assets result in them being automatically crossed off Grace's list.

Meanwhile, Precious' search for Nandira's Jack continues in vain as she follows Mr. Patel's daughter through Gaborone's African Mall market. But finally, she gets a lead. Nandira has bought two movie tickets for tomorrow's showing of "Birth of Fear III."

Outside the No. 1 Ladies' Detective Agency, Cephas Buthelezi takes pleasure in having "stolen" the Kgali Shopping centre break-ins investigation from Mma Ramotswe. Then Buthelezi boasts of being good friends with her ex - the very popular with the ladies trumpeter Note Mokote - because of his involvement with several night clubs in Botswana and in South Africa's capital "Jo-burg." Precious closes the door on her competitor after he dismissively suggests her new car mechanic boyfriend is a "much more suitable match."

"I took him for granted." On the morning of Two Shots Pulani's beauty contest, BK mourns his long lost love and asks if Precious misses JLB. Their conversation is interrupted by Pulani and an overwhelmed Mma Makutsi. In order to finish their investigation before tonight's big event, Mma Ramotswe agrees to take one of Grace's two remaining interviews.

Grace meets with contestant Patricia Quatleneni. Patricia's country mother opposes her pretty daughter participating, believing the contests to be rigged. She's not the beauty queen type but Patricia becomes Grace's favorite when Patricia reveals her dream of entering Mma Makutsi's alma mater, the Botswana Secretarial College. Meanwhile, the outspoken and attractive pharmacist Baone Magasane impresses Mma Ramotswe with her outrage at the hypocrisy of the event itself. She's disgusted that her private life is being scrutinized while the morals of adulterating men go unquestioned.

At the movies, Nandira Patel confronts the No. 1 Ladies' Detective for following her. When Precious comes clean about Mr. Patel's concerns, Nandira tells Precious just how perfect Jack is and just how different he is from what her overbearing father wants for her. Eager to be debriefed after the detective meets with her father, Nandira writes her phone number on a page torn from her diary. Suddenly, Precious understands everything.

As Grace and her excited brother arrive at the Miss Beauty and Integrity contest, Mma Ramotswe delivers her report to Mr. Patel. But it turns out, Cephas Buthelezi is already there crowing about Nandira blowing Precious' cover and proclaiming he will write a warning to every Jack in the city. Confident that he will not have to resort to violence to protect Mr. Patel's plans for his daughter, it never occurs to Mr. Ex-CID that this perfect boyfriend is the product of a teenage girl's imagination. But when Precious shows Mr. Patel that the fictitious lover letter and the phone number Nandira gave to Precious were both written on the pink pages torn from his daughter's diary, it's obvious which detective has a hold on the truth.

When her father asks Nadira why she would do this to him, she explains that she didn't feel like she had anything of her own. He had planned out her entire life and never bothered to ask her what she might want. And now even her imaginary life has been taken away from her.

"We both know there is unfinished business there." At the beauty pageant, it looks like Two Shots Pulani is going to pull a fast one and proclaim Motlamedi the winner when Grace Makutsi puts her foot down. "You are worried about the girls, but what about your own integrity?" asks the outraged assistant detective.

While Mr. JLB Matekoni packs up his gear, an angry Cephas Buthelezi nearly runs Precious off the road. She got lucky with Mr. Patel but that can change, he warns her. For he and Two Shots are planning a long overdue comeback for Note Mokote which will give her ex a "chance to see friends and family." Clearly shaken by Buthelezi hard boiled tactics, Mma Ramotswe absent-mindedly drives toward the Limpopo.

With Grace Makutsi's hard stare on him - and to the surprise of the shell-shocked runner-up Motlamedi Matluli - Two Shots pronounces Patricia Quatleneni "Miss Beauty and Integrity." Backstage, a proud Mma Makutsi tells Patricia that she's arranged for a full scholarship to her alma mater, but a more confident Patricia now has bigger dreams than attending secretarial college.

"It is you. I never thought that I would really find you." After they meet on the road, Precious wants Rra Matekoni to "ask me again." After her fiancé proposes again, and she tearfully says yes, the happy couple head back to Gaborone as pasted posters announce the return of Note Mokote.