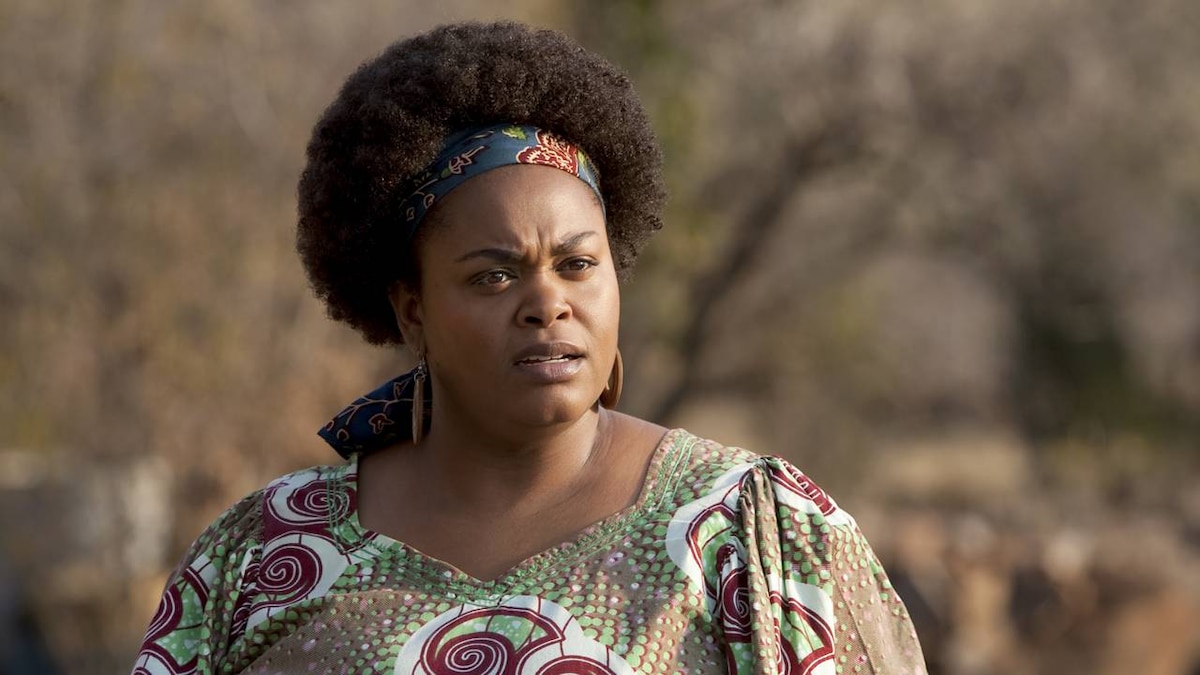 The Boy with an African Heart

After bringing her deteriorating brother Richard a bowl of porridge, Grace Makutsi rushes off to the No. 1 Ladies' Detective Agency. As she arrives at the Kgale Hill shopping center, chickens peck in front of still-closed store fronts and a young worker unlocks Rra Sesupeng's Treadwell Shoes to discover the shop has been robbed.

"I don't mean that you are going nowhere." At the Agency, after sharing an odd rhyming letter from a victim of "the glass ceiling," Mma Ramotswe puts her foot in her mouth, stating that but for her father's inheritance she too would be just another woman sitting around someone else's office. Realizing how that might sound to her secretary, that she assures Grace that she didn't mean she was going nowhere.

As an angry commotion fills the parking lot, the two women dash out to find an irate Rra Sesupeng blaming his forgetful employee for the shoe shop's break-in. When the beaten-down assistant pleads his innocence, Precious, deeply offended by Sesupeng's brutality and quick judgment, decides to investigate the crime scene. Much to the amusement of onlookers, the No. 1 Ladies' Detective concludes the odd theft of three shoes from three different pairs and a small unlocked window prove children were the culprits. Recommending he install some bars on the window, she reprimands the mean-spirited shop owner for abusing his hard-working assistant.

"We think that we will get over the pain but it never happens." As Mma Ramotswe and Mma Makutsi evacuate the office over-run by a brood of chickens, an American woman clad in expensive designer wear arrives by taxi. A tightly-wound Andrea Curtin wants to find her son who she fears is no longer alive. An idealistic Stanford graduate, Michael Curtin had come to Botswana to work on a farming commune and mysteriously disappeared 10 years ago. Now that her husband has died, a still-grief stricken Curtin needs closure to start a new life.

When Mma Ramotswe introduces Mma Makutsi as her "secretary," Mrs. Curtin comments how in the States people no longer use that archaic term - instead staff workers are now assistants or associate executives. To Precious' consternation, Grace loves the more modern and loftier job titles.

Mrs. Curtin's son wanted to change the world and thought the greening of the desert was a great way to create a self-sufficient populace. He thrilled his parents with beautiful letters about finding his African heart.

When Michael was initially reported missing, she and her husband Jack jumped on a plane to get to the bottom of things. They talked to many people from the farm, even hiring a bushman tracker named Jo Jo. Despite their exhaustive efforts, what happened to their cherished son remained a total mystery. Michael had simply gone to bed one night and was missing the next day. Eventually, a devastated mother and father gave up their search and went home.

"A stale inquiry is unrewarding for all concerned." Mma Ramotswe decides they must go to the farm, assuring the skeptical American that there will still be echoes of what happened and if they are sensitive enough they will learn something from what remains.

Using common sense, Grace cracks the phone book to track down former commune member Oswald Ranta, now a professor at the University of Botswana. But there is no need to look up Rebecca Soloi because Mma Makutsi already knows the nurse works at a free clinic in Moshupa. "How?" asks Precious. "Coincidence," is her employee's vague reply.

On the drive out to the farm, Andrea Curtin shares with Mma Ramotswe her decision of selling the family's successful business to attend college for African Studies. Just like her son. Still new to Botswana's generous ways, Curtin wonders if the two women will be safe picking up a little old man hitchhiking. Grateful for the ride, their departing boom-box-toting passenger points them in the direction of Mma Potsane who he knows used to work for the commune.

At the office, Grace calls Rebecca Soloi asking her not to mention her sick brother when she meets Mma Ramostwe.

"Oh, I'm sorry my sister." After Mma Ramotswe makes the traditional Botswana introductions, the former housekeeper says she remembers the missing American. Welcoming her visitors to her somewhat meager living situation, Mma Potsane graciously makes them a bowl of maize-meal. Cheerfully, she encourages the detective to remarry, suggesting that policemen, mechanics or ministers make for the best husbands.

At the remains of a once flourishing farm, Mma Potsane suggests it would have been easier to grow grass on your head then to try to grow vegetation in the desert. Privately to Mme Ramotswe, she theorizes that Michael had been carried off by the Kalahari winds.

Inside what was once the medical facility, where Mrs. Curtin remembers nurse Rebecca Soloi being one of the first people to recognize the country's spreading AIDS scourge, they find a newspaper clipping with a photo of the commune members. A happy Michael stands next to Clara Sedibe, a striking young woman unknown to Andrea Curtin. Mma Potsane points out a recently-made fire, as both she and Mma Ramotswe sense in the winds a spirit that can't get away.

On the way back, as Africa begins to seep into her being, Andrea marvels at the sight two giraffes fighting to prove their manhood.

At JLB's for dinner, Precious discusses the case. It's obvious from the photograph that Clara and Michael had a connection. JLB opines it wise for Precious not to mention the winds because although Americans may be very smart, they do not understand spirits. His rather surly housekeeper rudely clears the plates. According to JLB, she's jealous of Precious. When Mma Ramotswe states she's not got a reason to be, Rra Matekoni simply replies, "I know."

After Precious puts the word out that she wishes to speak to Jo Jo, Grace Makutsi asks her boss for a promotion. She doesn't want more money, just a more fitting title. One that indicates she does some detective work in addition to her secretarial duties. But the aspiring assistant detective's query is interrupted when BK bursts in with a wardrobe emergency. Only after Precious fixes his pants and drives off does he realize his salon has been broken into. With Mma Ramotswe on the road, Grace investigates. The children have struck again and in her exuberance to prove her case, she breaks off the window latch.

At the Moshupa Clinic, nurse Rebecca Soloi speaks fondly of Mma Makutsi's great heart before offering some cake to a very pleased Precious Ramotswe. Ten years ago, Mma Soloi's instincts made her suspicious of Oswald Ranta but now she's not so sure. Michael definitely had feelings for Clara and they both disappeared that night. So, maybe Precious is looking for two people but she has a feeling Michael Curtin is alive. On her annual trip to her family, she often stops by the abandoned farm. This last time, she too had found the fresh remnants of a fire but also this piece of wood with "Michael Curtin" burnt into it.

"Does he know if the body is man or woman?" Jo Jo and his granddaughter Doris have been waiting for Mma Ramotswe under an acacia tree. With Doris translating a remorseful Jo Jo says he cannot live with his lie anymore. He had sensed a body buried in an ant hill there. He knows he should've told the grieving Curtins but Oswald Ranta threatened harm to him and his family if he said anything. As far as who is lying there, the bushman tells the detective she must dig to find the answer.

Precious' concern that Clara, and not Michael, might actually be the victim pushes her to ask if Andrea would be able to forgive whoever it is that caused such grief instead of seeking justice's retribution. Mma Ramotswe explains her country's traditional belief that if a wrongdoer is truly sorry then the wronged must try to find it in their hearts to forgive them.

At the University, Dr. Ranta's receptionist is packing up on her last day on the job. With very little prodding, the outraged receptionist reveals that Dr. Ranta slept with her cousin's daughter in exchange for showing her a final examination. In fact, she sees many female students slink in and out of his office and nobody ever says anything of his sexual harrassment. As the receptionist takes her Agency leaflet, Precious suggests only one person need to tell the truth to stop Dr. Ranta's abuses.

Inside his office, an empowered Mma Ramotswe, loaded with dirt on the arrogant professor, threatens to expose him if he refuses explain what happened to Michael and Clara. Assured she will not turn him in, the small-minded man states he and Clara had been sleeping together before the idealistic American showed up. Ranta's suspicions that Michael had stolen Clara's heart were confirmed when the couple returned from a trip up north where they had gotten married. Betrayed and angry, Ranta violently confronted Clara, but Michael came to her rescue. The two men scuffled before Michael chased Ranta out into the black night. Suddenly, all went quiet until Clara started screaming. Her husband had broken his neck falling into an unseen ditch and died. Deciding that the truth would not be believed, Ranta buried Michael's body in an anthill. Finally, Ranta reluctantly admits he knows Clara is now running a small hotel up near Maun.

On her way out, a triumphant Precious finds the receptionist tacking up a composite of Dr. Ranta's picture and her Agency leaflet offering help with sexual harassment cases.

"I am Michael Curtin." Having gotten directions from a lady selling African crafts at the side of the road, Mma Ramotswe finds Clara Curtin and her son Michael Curtin at the Kwane Hotel. Clara had feared telling the crazed Ranta that she was pregnant. Knowing Ranta would try to blame her for her husband's death, she ran, until settling at the hotel. When young Michael started asking about his daddy, she took him down to the farm, made a fire, and talked and laughed just like she and her husband had once done. Desperate to make amends for hiding the truth, she agrees to tell her husband's story to his mother.

At the Agency, a relieved Clara emerges from her meeting with Andrea Curtin. At peace with what happened to her son, her grandson Michael gives her a small traditional basket. Explaining the woven pattern represents the tears of the giraffe. "Everyone in the world has something to give. But the giraffe has only his tears. They are all he's got."

"There is no one on this great continent who I would rather have as an assistant." When Precious congratulates Grace on her longed-for promotion, a tearful Mma Matuksi feels she in not worthy of the job. She's feels a coward for not telling Mma Ramotswe of her sick brother. She was ashamed of his disease. But Precious, moved by Grace's sense of responsibility, tells her assistant detective how brave she's been.

At the cemetery with her newly-found family, an unburdened Andrea Curtin, adorned in African styles and colors, buries her son. Then Mma Ramotswe takes Mma Makutsi by the hand to her own son's grave.