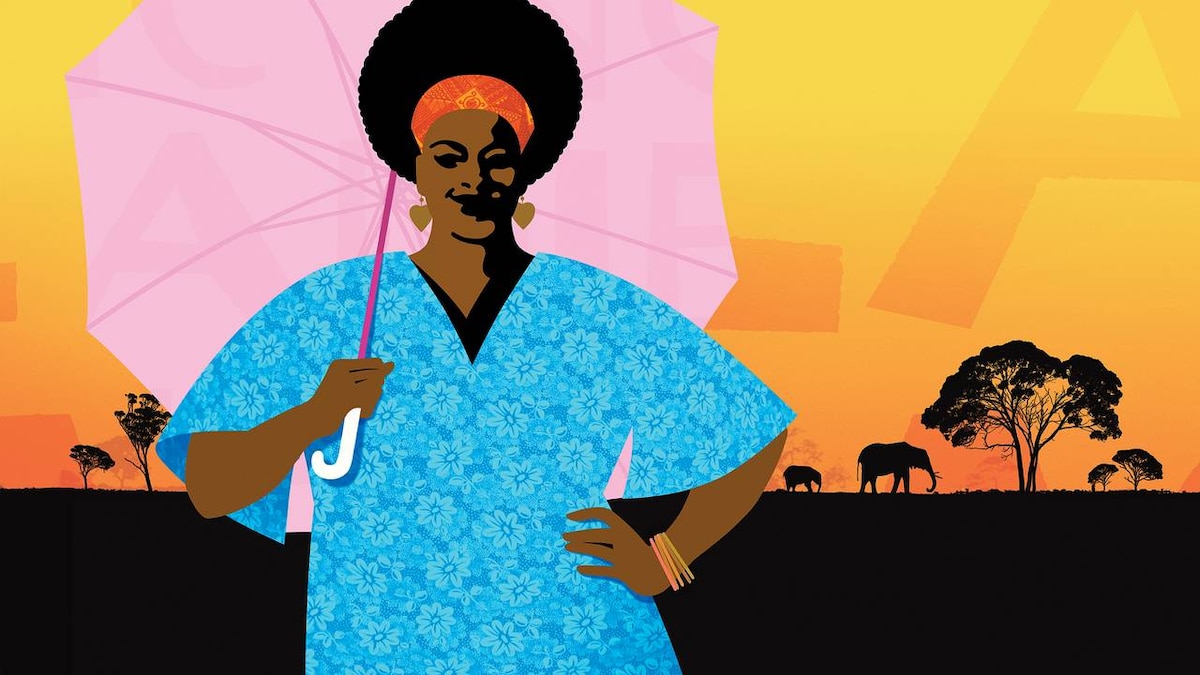 "I learned many things from my father," recalls Precious Ramotswe. Rra Obed Ramotswe taught her to use her eyes, ears and memory, instilled a sense of justice and helped her take pleasure in solving a mystery. He told her to be patient but most of all "to love my country, Botswana - the finest place on God's earth." When she got older he gave her his van - a little white pickup truck. And before his passing, he gave her 180 cows and requested that should she ever marry again that her second husband be a kind man.

As the villagers of Mochudi mourn her late daddy, Precious's abusive ex-husband Note (a trumpet player) and her father's conniving former lawyer, Lucky Sesana, pay their respects. Lucky presses an affronted Precious to consider his help with her great inheritance. But Precious has her own ideas of what to do with her windfall: She sells the herd at auction and hits the road for Botswana's big-city capital Gaborone.

When her van breaks down along the way, Mr. JLB Matekoni, the owner of the Tlokweng Road Speedy Motors repair shop, comes from Gaborone to tow her in. As they get acquainted, she tells JLB of her plans to be a detective. Impressed by her ability to size him up, JLB is convinced she will do well in her new profession.

As they near Gaborone and the skies darken, they encounter a tragedy - a young boy has disappeared. The police and the local community are out in force with search lights and efforts to comfort his distraught father, Ernest Morapedi. Disturbed by what they've learned, Precious and JLB continue their journey, hoping that the worst has not happened - that the son has been murdered and his body used for witchcraft.

"Dumela, Mma." In Gaborone, Mma Ramotswe sets up shop in a small disheveled former post office in a neighborly Kgale Hill shopping center. With the help of Mr. Matekoni and BK, the flamboyant owner of the Last Chance Beauty Salon next door, Precious opens the No. 1 Ladies' Detective Agency.

Although business is slow (as in non-existent), Mme Ramotswe gives the awkward and officious Grace Makutsi - who graduated from the Botswana College of Secretarial and Office Skills with unprecedented score of 97% on her examinations - a month's trial as her secretary. Relieved to have work after losing out on job opportunities to younger, more scantily-clad but less competent classmates, the off-putting Mme Makutsi still manages to make Precious think twice about her decision.

Then out of nowhere the agency gets its first case: Happy Bapetsi and her dubious "Daddy." Happy Bapetsi's father has miraculously returned after abandoning his little girl and her now-deceased mother years ago. Being infirm, he's taken up residence in Happy's home, freeloading off her hard-earned success and her desire to be a dutiful daughter. Happy suspects he is an imposter. The next day, Precious stakes out Happy's home, only to witness the man doing a jig seconds after his daughter has served him breakfast and rushed off to work.

Back at the office, as Botswana's only female detective ponders how she will expose this "Daddy," a second case walks in the door. Alice Busang, suspecting her husband Kremlin of being a philanderer, hires the agency to find out the truth. On Mr. Matekoni's advice, Precious winds up at the Go Go Handsome Men's Bar armed with a photograph of Kremlin. But instead of catching Alice's lady-killer husband with someone else, it is Precious who ends up being his heart's desire - "a proper gorgeous African woman."

As the heat builds back at home, Precious baits the smooth talker into photographing them kissing. Once the evidence is snapped, detective Ramotswe tosses Mr. Busang out, promising "good things for those who wait."

The next day, BK introduces factory owner Hector Lepodisi to Mma Ramotwse. Mr. Lepodisi is dubious of a former employee's insurance claim that a work accident required the amputation of a finger and doesn't want to pay. Precious is reluctant to take the case - if a worker has been injured on the job, the owner should pay. Lepodisi insists he wants to be fair: He will pay if the claim is true and donate the money to charity if Solomon Moreetsi proves to be a fraud. He only wants justice. When Precious notices Lucky Sesana is Moreetsi's lawyer, she too smells something fishy.

As things pick up, the costs of running the agency build up. A frustrated Mma Makutsi insists the office needs a phone with an answering machine, while Precious needs Mr. Matekoni to look at her van's worn-out brakes. At the garage, JLB is also upset. He's found some evil muti - a witchcraft medicine bag containing a finger bone - inside the repaired car of the notorious Charlie Kgotso.

"Where there are drugs, where there are guns, where there are disappearances, you will find this name," says Matekoni regarding his reluctance to have the bone tested by the police. Unafraid, Precious busts the window of Kgotso's Mercedes, takes the bag and instructs JLB to offer her services in the retrieval of the gangster's "stolen" muti.

Two off-hand remarks, one by BK about the sacrifices a father will make for his child and the second by Grace about the office typewriter already missing 'h's, provide Precious with epiphanies into the cases of Happy Bapetsi's dubious father and Solomon Moreetsi's insurance claim. Following her hunches, Precious asks Dr. Gulubane to examine Kgotso's muti, and he tells her that it is not Moreetsi's amputated finger but a child's. He then provides Precious with a costume she needs to nab "Daddy" Bapetsi.

Arriving with sirens blaring, "nurse" Precious tells an alarmed "Daddy" that Happy has been in a horrible accident. Keeping up appearances he climbs into the borrowed ambulance but balks when she tells him that half his blood is needed to save poor Happy and "Daddy" is forced to admit he's not really her father. Mma Ramotswe drops him in the middle of nowhere with the warning to never bother Happy Bapetsi again.

At the office of Lucky Sesana and Associates, Precious makes a bet that Lucky will lose Solomon's case, then produces three different insurance claims for the amputation of the same finger, each with Lucky's signature. Upon leaving she sweetly suggests he might want to hire a lawyer for himself.

"We are winning!" A triumphant Mma Ramotswe is quickly brought down to earth after an indignant Mrs. Busang concludes that the pictures of her wayward husband kissing the detective only proves Precious is a jezebel. Mma Makutsi dryly observes they are unlikely to receive payment for that particular case.

At a children's rescue center, the orphans and children with special needs are enjoying the glorious day as Mma Ramotswe confronts Solomon Moreetsi. It turns out, he's used the insurance money to assist his troubled family's nieces and nephews and these orphaned kids who are only guilty of being born in a time when the disease HIV "can take your parents...and your aunties, and then you." Convinced of his good intentions, Precious insists that in the future he must find a legal way to make his contribution.

Later at the Kgale Hill shopping center, Precious resists Charlie Kgotso's intimidations to reveal who stole his muti. Pretending she wants revenge, she fools him into incriminating himself and drawing a map of the witchdoctor's location out in the Kalahari Desert. She also tape records the conversation as her secretary secretly photographs the meet.

"Aiee! They cannot hang me if the boy is not dead!" As the sun beats down, Mma Ramotswe scares the witch doctor's wife into revealing where they've hidden young terrified Thabiso Morapedi. Although scarred from blood-letting, all his beautiful fingers are intact. While she drives through the night to bring Thabiso back, Precious mourns her own baby, still-born from the beatings she suffered from ex-husband Note. In the morning, as Thabiso is reunited with his grateful father, the police arrest the most feared man in Botswana, Charlie Kgotso.

The community gathers in celebration as Hector Lepodisi makes his donation to the children's center and a sulking Lucky Sesana does the same. Alone in the shade, an awkward Mr. JLB Matekoni asks Mma Ramostwe to release the hand brake on her van before accelerating. "I will do anything you ask," Precious replies, then politely demurs when JLB proposes marriage.

Back at the office, Mma Makutsi informs Mma Ramotswe that since the first month's bills will wipe out the agency's earnings, Grace will forgo her yet-to-be determined salary until they can make a profit. Precious Ramotswe acknowledges how pleased she's been with her secretary's work, as the two women, keeping their emotions in check, close up shop.