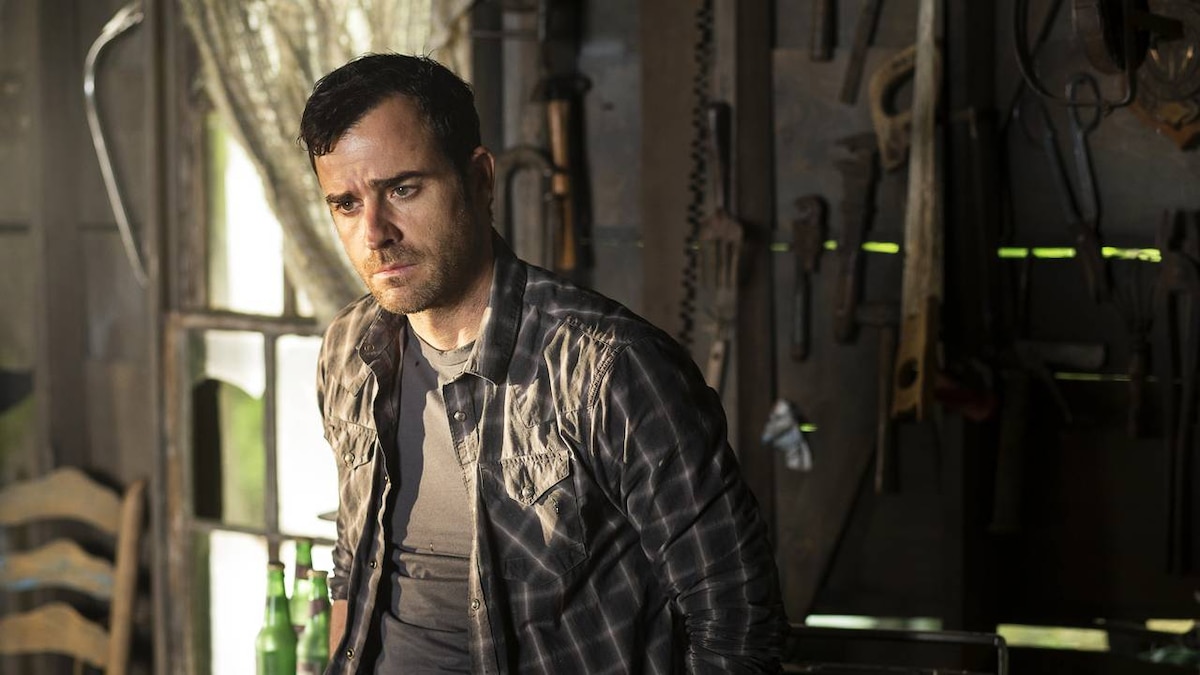 A woman wraps up a cellphone call, suddenly aware the baby in her backseat is no longer squalling. Turning around, she sees that the car seat is empty. Elsewhere in the parking lot, a little boy calls out for his father as a shopping cart rolls directionless. On the street, one car smashes into another; alarms and sirens begin to wail.

Two percent of the world's population has suddenly disappeared.

Kevin Garvey, Mapleton's chief of police, approaches a dog on the street when, suddenly, it's shot. A man with a rifle gets back into his truck and drives off, leaving Kevin with the dying dog. Back at home, Kevin gets ready for work while the news plays in the background: The scientists commissioned to research the Departure have no idea what it was.

Laurie wakes and lights a cigarette in a room filled with people asleep on mattresses. Dressed all in white, she begins her morning routine in a house filled with people also in white and smoking. Signs around the house proclaim: "WE ARE LIVING REMINDERS" and "WE SMOKE SO THEY REMEMBER." When a list is posted without her name on it, Laurie seeks out Patti and asks to be included. The two communicate by writing on pads and snapping fingers.

Like the rest of her classmates, Jill Garvey remains in her seat during the Pledge of Allegiance. While a few students kneel during the prayer portion of homeroom, Jill makes eye contact with Nick, the boy she has a crush on. Nick mimics blowing his brains out, but Jill spooks him when she mimes being hanged.

Out west, Tom Garvey picks up Congressman Witten after first taking a large cash payment and confiscating his cellphone. During the drive, a blindfolded Witten looks for reassurance about "Wayne," and Tom promises: "He's as real as it gets."

Kevin tries to return the dog to its owner, and she confuses him with his father, the former chief, who "went crazy." Kevin corrects her and breaks the bad news about Dudley, the dog. Mrs. Tunney is uninterested: "He was my husband's," she says. "He's not coming back either." Kevin is rattled when a taxidermied stag he noticed on the lawn is gone.

"Nobody's ready to 'feel better.' They're ready to f*cking explode."

Kevin arrives late to a planning meeting for Heroes Day, Mapleton's acknowledgement of the Federal Holiday of Remembrance. Mayor Lucy Warburton catches flak about whether the departed were heroes and is displeased when Kevin expresses concern about being able to secure the event. The Remnant are sure to show up and provoke everyone, he says, and asks the celebration be canceled. Lucy says no. Returning home, Kevin notices a photograph in the stairwell and smashes the glass, obscuring a face.

Congressman Witten meets Wayne and asks for help. His job done, Tom heads for the pool to deliver candy to and flirt with Christine, one of several girls lounging poolside. When his dad calls, he ignores it. Congressman Witten emerges all smiles from his meeting, but Tom is clearly unnerved by a request that he stay behind and meet with Wayne.

Laurie sits in a circle in the communal house and helps pass out thick dossiers. She shares one with Gladys, and they examine a photo of an attractive young woman.

"We're sorry you got stuck with us."

Kevin serves dinner to Jill and her friend Aimee. At the mention of Heroes Day, Kevin instructs his daughter not to attend but won't explain why. Aimee breaks the tension by suggesting Jill attend a party. Kevin reluctantly gives Jill his OK and his car.

The teenagers play "Spin" on an iPhone at the party. Nick spins "f*ck" and heads off with Aimee when it lands on her. On her turn, Jill gets "choke," and goes off with her friend Max. Jill strips down and lies next to him as he jerks off. At his request, she starts to choke him. Finished, Jill walks around the house and spots Aimee with Nick. She runs into the Frost twins, Adam and Scott, outside the house, searching for their keys in the dark. When they go to her car for flares, they discover Dudley's body. The three bury the dog.

Meg, the woman in the dossier photograph, heads out with her fiancé, Darren. The pair take note of Laurie and Gladys standing watch outside of their home as they drive away. At dinner, Meg feigns interest in their upcoming wedding until she realizes they are still being watched. Darren firmly asks Laurie and Gladys to leave and is pleased when they do. His satisfaction is short lived; the watchers are waiting for them at home. At that, Meg jumps out of the car, slaps Laurie and sobs, "I don't understand what you want."

"Some bad sh*t's coming and there's no getting around it."

Wayne wakes Tom to discuss Christine. She is important, he says, giving Tom instructions to protect her - and not to touch her. Wayne then shares a recurring dream he's been having about his departed son. The dream carries a warning to wake up; it's been three years. "Grace period is over," says Wayne. "Time to go to work."

Kevin hits a deer while driving at night. As he approaches the still-twitching animal, he wakes up in a sweat on his bedroom floor. With only minutes before the parade's start, he hustles through the house in search of Jill. Not only is her bed untouched, the kitchen is a mess of broken glass and dented appliances.

Kevin finds Jill in the Heroes Day crowd but she refuses to leave. Reverend Matt Jamison works the scene, handing out fliers imploring people to understand it wasn't the Rapture. After Mayor Warburton unveils a ceremonial statue and a Girl Scout troop reads the names of the missing, Nora Durst takes the stage. Nora, who lost her entire family, says she would take their very worst days together just to have her children and husband back. Her speech is interrupted by the arrival of Laurie, Patti and others in white - the Guilty Remnant. The Remnant hold up signs spelling out "STOP WASTING YOUR BREATH." Furious, the residents of Mapleton attack the sign-holders, who don't resist. Kevin and his men struggle to defuse the riot.

"Thank you for f*cking underlining that."

Kevin sits in a bar as TV pundits debate the Departure. A woman asks him where he was that day; she was in the parking lot. Kevin remembers having sex, but says he was cleaning his gutter. He recognizes a patron as the man who shot the dog, but is unable to detain him.

Kevin goes to the Remnant cul-de-sac and gets into a fight in search of Laurie. She watches silently while Kevin argues with Patti, who scribbles empathically on a pad demanding he leave. Kevin appeals to Laurie - his wife - "Please come home," but is tackled by another Remnant. As he drives off, a taxi pulls in. Meg climbs out of the car and asks to stay. Speaking for the first time, Patti tells her she can stay for as long as she likes.

Jill notices the smashed family photo and pulls away the broken glass from her mother's face. Poolside at Wayne's ranch, Tom takes off his shirt and reveals a back laced with scars. He dives into the pool and screams under water, unaware that his father is trying to reach him again.

A stag appears before Kevin on the drive home, prompting him to ask, "Were you in my house last night?" The stag takes off, chased by a pack of wild dogs. The mystery man pulls up in his truck and advises Kevin to start shooting: "They're not our dogs anymore," he says. After a moment's hesitation, Kevin pulls out his gun and does.