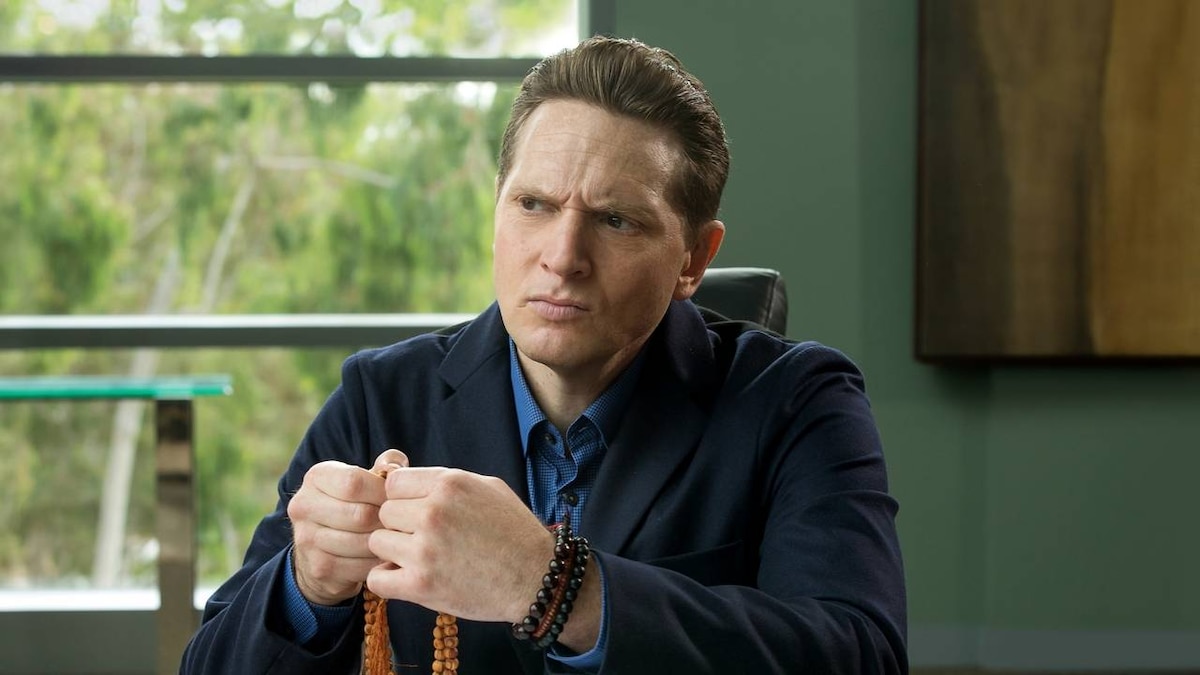 At a bar, Big Head runs into the Hooli brogrammers, who tell him that Nucleus is "dog shit." The two of them are rude to Big Head. "Do you have any skill at all other than magically failing your way to the top?" one of them asks. The pair exits, leaving a Hooli Nucleus phone behind. Big Head gives the phone to Richard, who describes the Nucleus interface as "Soviet era" and plans to use it in his battle against Hooli.

Ron LaFlamme listens as Richard talks on the phone with Gavin, who wants the Hooli phone back. Gavin and Richard threaten each other in veiled ways, under the advisement of their lawyers. "Alright, Richard, so what do we do here?" Gavin asks. Ron says he'll sidebar with the Hooli lawyers, and later Richard explains to the Pied Piper team that they're going into binding arbitration, which is "a trial but massively accelerated." Arguments for the Pied Piper-Hooli lawsuit will happen over two days, then a retired judge will make a ruling.

Richard and the guys meet with their new litigation lawyer, Pete, who has a sketchy history that possibly includes cocaine and underage sex. He's taking the Pied Piper case on spec because he's been disbarred, although Pete assures them he can work on an arbitration like theirs.

Boxes upon boxes of documents are delivered to the Hacker Hostel, and Jared explains that it's a "classic" document dump. Richard explains to Pete that he never used Hooli resources to develop Pied Piper. Pete warns him that if there's a conflicting version of Richard's story anywhere, though, that could be a problem. Erlich offers a list of questions he should be asked on the stand, but the lawyer says he doesn't intend to call him to testify.

Jared wonders if anything is wrong with the condor egg that's streaming on their website -- nothing has changed in two weeks. Jared wants to call the museum to check on the egg, but Gilfoyle and Dinesh scare him into not reaching out...yet.

Pete confronts Richard, asking him why he said he hasn't had a girlfriend in three years even though there are lots of emails to Big Head that reference a girlfriend. Richard says it's a joke. "Big Head and I, we call my laptop my girlfriend," Richard says, "because it's the only warm thing that's touched my crotch in a little while." Knowing this, Pete deduces that Richard did Pied Piper work with Hooli resources and explains that the company is screwed if "the attorneys at Hooli figure out that your girlfriend is your laptop."

At the arbitration, the Hooli lawyers start by calling Big Head to the stand. "Haven't you received three Hooli promotions in a month?" a lawyer asks him. "It seems like everything you touch is made dramatically better." Pete is excited -- he thinks Hooli's case rests on building up Big Head as a strong contributor to Pied Piper.

Jared gets off a call with the museum. "They said that it's very unlikely that the condor egg is still alive," he tells Dinesh and Gilfoyle. "But my phone call itself drew their attention to the low viewing numbers, and they've decided to take down the cameras today."

Pete switches his tactic and calls Erlich to the stand. "Is it also fair to say that every instinct that you have as a businessman has been completely and totally wrong?" the lawyer asks. "Aren't you considered a joke in this town?" The lawyer establishes that Big Head is a moron because Erlich is a moron when it comes to business. In defending his business decisions around Big Head's app NipAlert, Erlich lets it slip that it crashed his laptop for three days -- the exact time period that Richard used a Hooli computer to work on Pied Piper. The Hooli lawyers seem to have picked up on the slip.

Erlich suggests Richard lie about the computer use when he goes on the stand. "Richard do the right thing here," Erlich says. "Lie on the stand." The Hooli lawyer questions Richard about the last time he had a girlfriend, and Richard admits he calls his laptop his girlfriend. "Mr. Hendricks, did you at anytime use a Hooli computer to test and or alter your Pied Piper algorithm?" the lawyer asks. Richard doesn't directly answer the question. "I wanted Pied Piper to be different," Richard explains. "But if this company is built on lies, then we're really not much different than Hooli." He admits to using a Hooli computer, prompting Erlich to dramatically stand up and say that he's his girlfriend. "You don't have to protect me anymore!" Erlich says.

Jared views the condor cam livestream as a museum employee climbs up to take down the cameras. Jared, Gilfoyle and Dinesh watch the still-streaming camera as the guy falls backward out of the nest and lands with a thud.