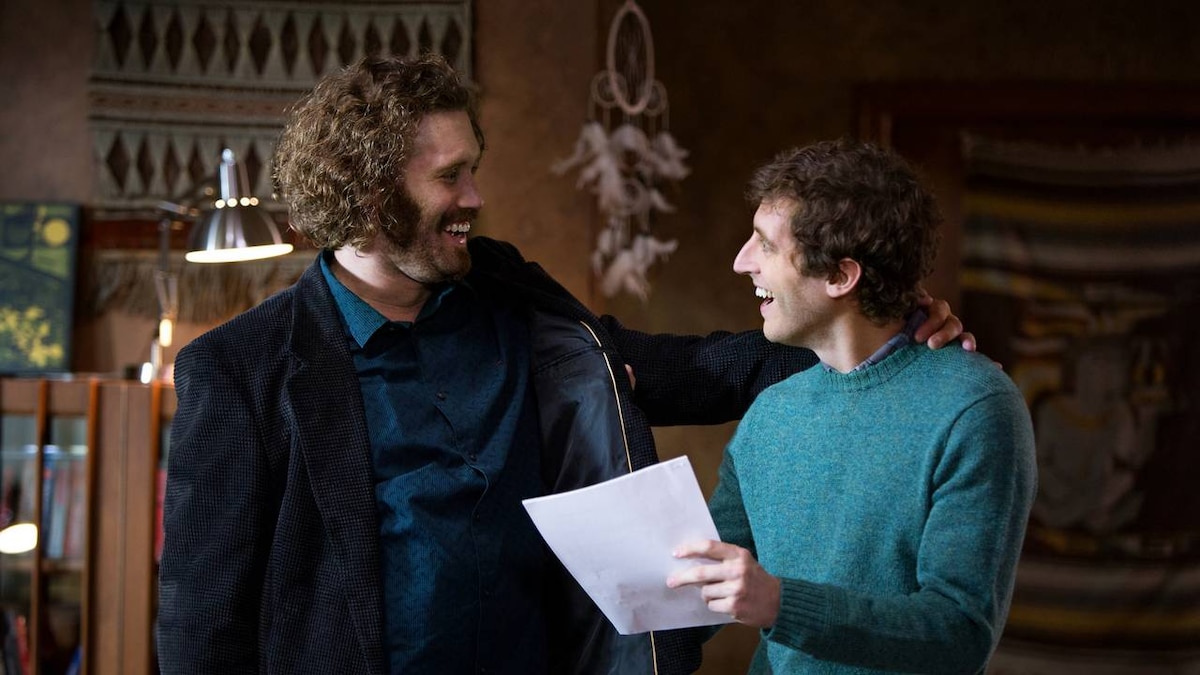 A pitcher at AT&T Park winds up and throws a pitch across the plate...where Richard, at bat, flinches instead of swinging. "Sorry, I can't really throw it any slower," the pitcher says. Stern Taylor Capital Fund, a venture capitalist firm, is throwing a party at the stadium, in an attempt to woo Pied Piper while they're deciding on who'll fund their series-A financing. "Together, Richard," the Stern Taylor guy announces to everyone on the field, "we'd be a hoooooome run."

Gilfoyle and Dinesh meet a rep from Stern Taylor and fight over who's Pied Piper's Chief Technology Officer. "I get it," Gilfoyle tells Dinesh. "You hear the word chief and you think: Indian chief. But you're the other kind of Indian." Erlich tries to connect with the Winklevoss twins.

Richard runs into old pal Javeed, who relays his story of woe at Goolybib: The company was acquired, the investors fired him and he blew his signing bonus on rent. "Don't get f--ked," Javeed tells a fearful Richard. "You take money from the wrong dudes, you'll get smoked as bad as I did."

Jian-Yang casually mentions to the guys at the Hacker Hostel that Peter Gregory is dead. Richard and Erlich go to Raviga and ask Monica what happened. She explains that, while on safari, Peter ran out of his tent after a commotion. "He hadn't run in a long time," Monica explains, "maybe ever. And you know, he just...that was it."

On the way out of Raviga, Erlich calls Jared and tells him to set up meetings with all the other venture capitalist firms who've been courting Pied Piper. Erlich says they're vulnerable at Raviga now that Peter is gone. "By the end of the day," Erlich says, "there may not be a Raviga."

In a conference room full of executives, Gavin watches the new marketing spot for Hooli's Nucleus. "I have a question," Gavin says afterward. "That was horrible. I just got humiliated by a f**king teenager at TechCrunch Disrupt, and you give me this tampon ad." Gavin goes on a rant about the coming explosion in data. "Ninety-two percent of the world's data was created in the last two years alone," Gavin says. "At the current rate, the world's data storage capacity will be overtaken by next spring. There will be nothing short of a catastrophe. Data shortages. Data rationing. Data black markets. Someone's compression will save the world from data-getton, and it sure as hell better be Nucleus and not God-damned Pied Piper."

Laurie tells Monica that she's been named the new managing partner of Raviga, driving home the point that they need to appear strong to their investors. Laurie makes it clear she's unhappy that Monica hasn't locked Pied Piper's funding. "Why are they speaking to other firms about investing in their series A?" she asks.

Before their first venture capital meeting at Stern Taylor, Erlich tells Jared and Richard that they're walking in there with "three foot cocks covered in Elvis dust." The firm seems unimpressed by the presentation, causing Richard to storm back into the conference room and awkwardly yell at them. Ss the guys get to their car, Richard hears from Ron LaFlamme that Stern Taylor sent a term sheet for a $25 million valuation of Pied Piper. Erlich realizes the company was "negging" them. "Negging is going negative," Jared explains. "It's a manipulative sex strategy used by lonely chauvinists."

Erlich is mystified by what happened. "You shitting all over them," he tells Richard, "counteracted them shitting all over us. You negged a neg. Richard, this could be good." Erlich "negs" at several more firms, insulting several investors who appear uninterested. At the last firm, Erlich "negs" by putting his balls on the table. The antics draw a term sheet putting Pied Piper's value at $75 million.

Monica stops by the Hacker Hostel with Laurie, who presents a term sheet that ups Pied Piper's value to $100 million. Monica returns later to talk to Richard in private. She tells him not to take the deal because it's "classic runaway valuation." "If you have a down round," Monica explains, "you are f**ked. You want to start at a realistic valuation and grow at a realistic pace." Richard thanks her and goes to meet up with Javeed.

Javeed tells Richard he's "doing okay." Richard asks, "What if you had asked for less?" Javeed realizes that's what he should have done and it's why he lost everything.

Outside Peter Gregory's funeral, Laurie asks Richard if he's made a decision about her proposal. Richard says he'll go with Raviga if the valuation is reduced to $50 million. "I think this is more reasonable," Richard says. "One more thing: Monica gets Peter's board seat." Laurie says she'll lock it down the next day.

At the funeral, luminaries from Silicon Valley eulogize Peter Gregory. Gavin gives a moving speech, talking about his first business that he launched with the mogul from Peter's mom's garage. "I will miss my friend," he says as a sign-off. "Bye Pete." Just as his speech ends, Richard gets a message from Ron LaFlamme saying that Gavin Belson is suing him for stealing Pied Piper from Hooli.