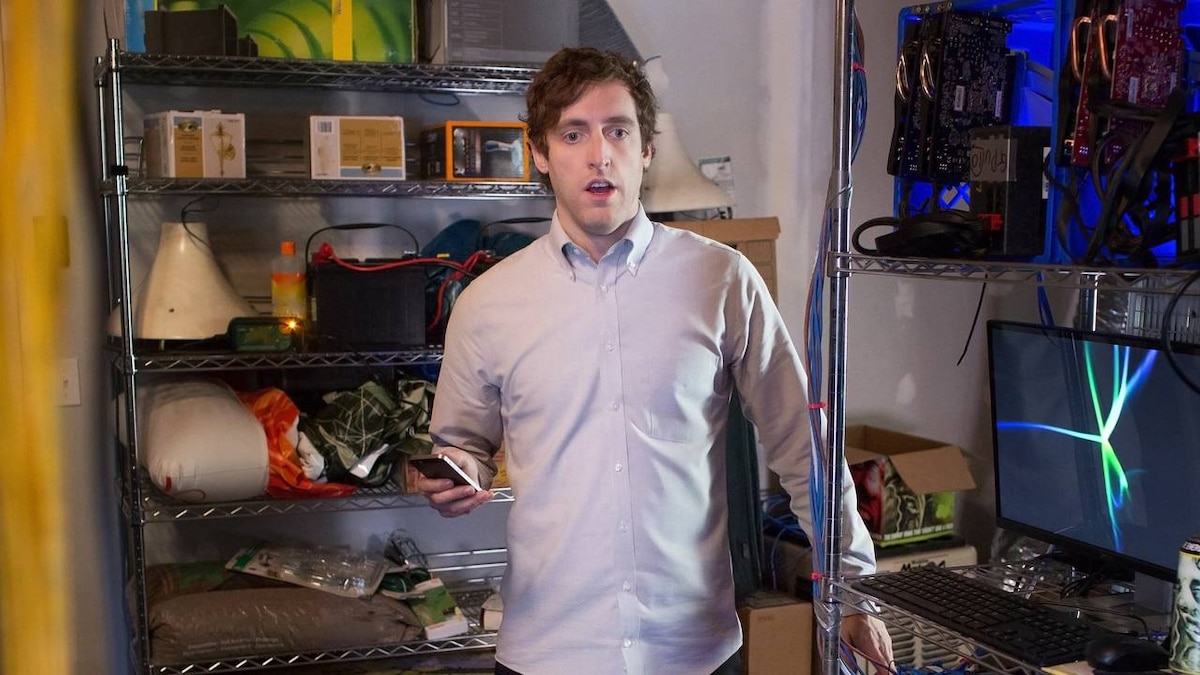 Two Days of the Condor

"Hello? Can anyone hear me?" the stranded museum employee asks on the condor cam livestream. The Pied Piper guys are watching -- along with 7,000 other people, Dinesh notes. "It's working flawlessly," Dinesh adds. Richard shows the lead Hooli lawyer out of the Hacker Hostel, telling the guys that the litigators wanted to "make sure the platform they want to seize is ready for them." Erlich demands an apology from Pete, who tells Erlich that he lost his composure and "ruined our entire case." The decision is set to be announced at 3 p.m. that day.

On the street, Erlich sees Noah, who tells him that he sold his house. The realtor approaches Erlich about selling his house, too, and it takes very little to convince him. The guys are surprised Erlich's selling and ask what will happen to the incubator. "Functionally, all I've really achieved is running a flophouse where guys have shat, jerked off and paid me no rent," Erlich says. Dinesh reports that the livestream of the stranded museum employee has more than 20,000 viewers now, after links on BuzzFeed and Reddit. The guys lament having to give the great technology to Gavin Belson, but Gilfoyle suggests deleting Pied Piper before it can be taken. "We can't give it to him," he suggests, "if we don't have it to give." Richard doesn't want to delete it. "I kind of want to see how big it can get, right up until the point where Gavin Belson has to f**king take it from us," Richard says.

Jared announces that Manny Pacquiao tweeted a link of the livestream to his more than two million followers. The guys scramble to make sure the system can handle the traffic, and it isn't long before they're up to 50,000 viewers. Gilfoyle says they're about to "blow the main breaker." Richard heads out to hear the judge's decision. "Keep it online as long as you can, okay?" he tells Dinesh and Gilfoyle before he goes. Meanwhile, Monica shows the livestream to Laurie, who's very impressed with what she sees.

Gavin helps Richard tie his tie in the bathroom at the hearing. Gavin tells Richard that he would have paid $250 million to buy out Pied Piper if the arbitration wouldn't have happened. "Believe it or not," Gavin tells him, "your algorithm is the only way to make Nucleus work."

Gilfoyle is jamming the Hacker Hostel's breakers so they don't trip. Erlich is worried about the place going up in flames just as he's about to sell. Dinesh notes that they're up to 200,000 viewers. The realtor, Louise, shows up with potential buyers who plan to tear down the house. The buyers want to make an all-cash offer right then, but Erlich tells her, "You can tell your clients, respectfully, that they may go f**k themselves." Erlich puts on wrist braces and jumps in to help Dinesh code to support the growing livestream viewership. The server overload causes a fire at the Hacker Hostel just as the museum employee drinks his own urine and a rescue team arrives and shuts off the camera. "Holy shit," Gilfoyle says, staring at the now-blank screen. "We did it."

The judge rules that Hooli has a right to ownership of Pied Piper's underlying IP. Richard texts Jared; "Delete it all," he writes. The judge adds a caveat about Pied Piper's hiring of Jared; Hooli contracts forbid the hiring, but the judge notes that the California Supreme Court deemed such rules unlawful. "So effectively, Mr. Hendricks never had a valid employment agreement with Hooli," the judge notes. "As a result, Hooli has no claim to ownership of Pied Piper's underlying IP. That is my ruling and, per your arbitration agreement, it is binding and final." It take a couple minutes for Richard to realize, however, that he told the guys to delete the technology.

Dinesh is about to delete the Pied Piper code. Richard tries to call Erlich to tell them to stop, but his phone battery dies. Then he drops his car keys into the sewer. The guys are about to hit delete once again. "One click," Dinesh says, "and poof." Just as Gilfoyle is about to push the button, Erlich suggests they have one last toast to Pied Piper. The guys cheer, as Richard desperately tries to figure out how to contact them. Richard hops on a bus and uses the bus driver's phone to email...but the message goes into spam. The guys delay the deletion further by procuring a lemon for their beers. Richard finally arrives. "We won," Richard tells the guys. "We beat Gavin Belson, and we won."

On the Hooli campus, Gavin heads to face the company's board, as executives postulate that he could be fired and Big Head could be put in charge of the company because of his many accomplishments. "That doesn't just happen," one says. "He must be smart as hell." Denpok overhears this and approaches Big Head, telling him he has "an aura" that could be "harnessed to great effect."

Russ approaches Monica at her office. "Question," he says. "What's got two thumbs and three commas? This guy." He tells Monica that Laurie bought his stake in Pied Piper. Laurie tells Monica that they now have a majority on the Pied Piper board. "We can now take the necessary steps," Laurie says, "to make sure Pied Piper is properly managed."

The guys are partying at the Hacker Hostel when Monica calls Richard. "Um…" he tells the guys, "...apparently Raviga held an emergency meeting of Pied Piper's board of directors and they all voted to remove me as CEO of my own company. I just got fired." That prompts Erlich to ask: "And what about me?"