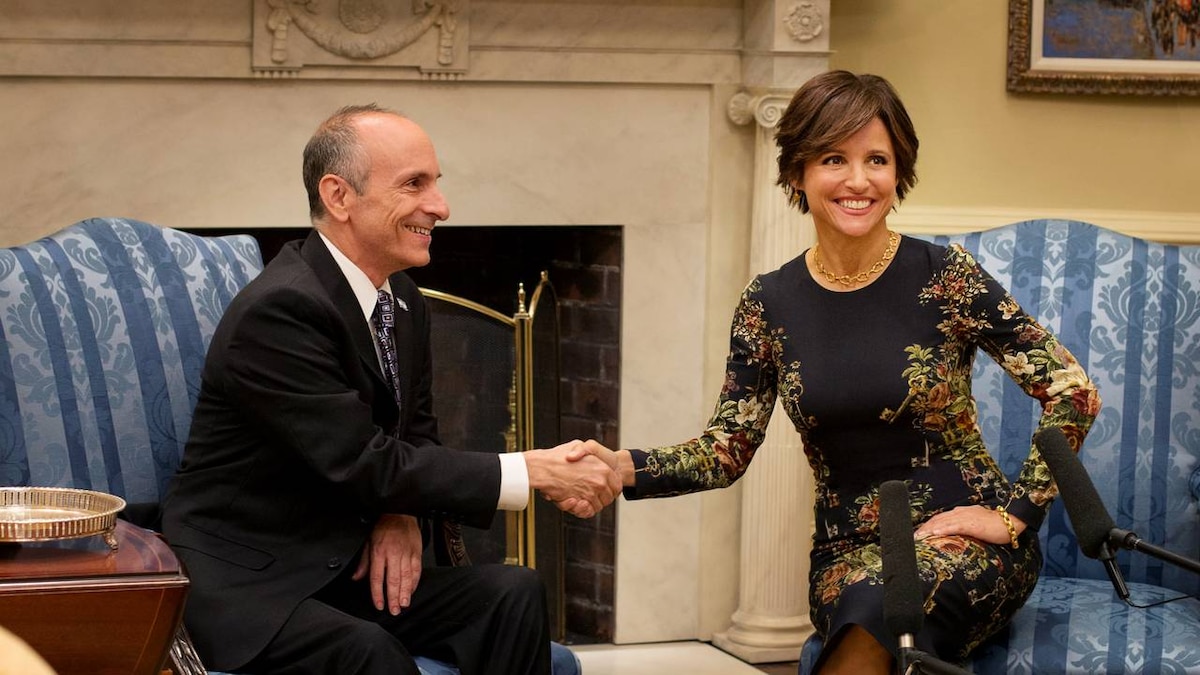 Mike gives a morning press briefing about Selina's first state visit from the Israeli Prime Minister. Jonah, Teddy and VP Doyle watch the briefing on TV, and Jonah realizes that Mike has dyed his moustache a brighter shade of orange. Afterwards, Teddy informs Jonah that on his advice to Doyle, Jonah will join Dan in persuading Congressmen to back the Families First Bill. Jonah's excitement doesn't last long; as Teddy leaves, he gives Jonah's balls a quick tap.

The President prepares for the state visit with her staff. Selina tasks Gary with making the state dinner pretty, pointing at a hideous abstract painting and explaining, "i.e., the opposite of that f**king monstrosity. What is that, Picasso's heavy period?" Selina moves on to discussing her campaign, announcing that she's bringing Bill Ericsson on as her new Director of Communications. Catherine asks to be a given a "core role" in the administration. Kent fakes a national security issue to get Catherine to leave before informing Selina he's polled Catherine's popularity and found that her "likability index is shallow."

"If anyone doesn't know the difference between a valence and a jabot, I really need you to leave." -- Gary

Gary orders staffers around while decorating for the Israeli Prime Minister's visit. The décor is already overly extravagant and expensive, but Gary pushes for even more luxury. While looking at a floral centerpiece Gary complains, "Oh my God, did we get these from a homeless man's grave? They're molesting my eyes."

After Selina's successful press junket with the Israeli PM, Mike and Jim bring word that the painting Selina spoke against earlier was removed, and, as it was the only work by a Native American artist currently on display in the White House, the community is taking it as a slight.

In response, Selina causally informs Jim that he should ask Ericsson to issue a statement, as Ericsson is replacing him.

"We do have Native American staff. They are on a list that you're going to give me in 30 minutes. Now get me some scalps. Names. Get me some names." -- Mike

Jonah and Dan meet with Congressman Pierce to discuss Selina's Families First initiative. Dan strikes a deal with Pierce to bowl at the exclusive White House bowling alley in order to get him on board, but Jonah takes it one step further, promising a game with Selina, plus a photo op -- something he can't authorize and which is probably impossible to schedule.

The President meets with the Israeli PM to discuss a timetable for peace talks. Trouble arises when the prime minister and Israeli dignitary spot Ben getting notes passed to him, and guess that they're about the Native American painting. They point out the irony of Selina talking to them about occupation when America occupies "someone else's continent".

Guilty and upset, Gary informs Sue and Amy that he's the one who removed the painting, and what's worse, the press found out he spent far too much money on the state dinner. They insist he tells Selina, but Selina dismisses him, claiming not to have time to speak with him. Furthermore, she says she needs to acquire more "butt-ugly Native American paintings" because the first one was "removed by some jerk-off with a hairball for a brain."

Jonah and Dan meet with another member of Congress to discuss Families First, and Jonah insists on taking the reins. When the Congresswoman asks about a contradiction in the bill, Jonah freezes, then invites her to a private screening of Martin Scorsese's latest film, claiming Scorsese will be in attendance. When the Congresswoman steps away, Dan confronts Jonah about his fib. Jonah insists he needs a staff to keep him informed about White House policy, or he'll reveal that Dan was behind the Danny Chung torture rumor.

"He's eager and hard-working and never complains, and every night I dream of drowning him." -- Amy

Dan takes Amy's over-enthusiastic staffer, Richard Splett, and makes him Jonah's assistant, which simultaneously solves his problem with Jonah and leaves Amy in his debt. Richard quickly warms to Jonah, thinking Jonah's the "coolest guy" he ever met. Jonah, in turn, is thrilled to have someone between him and the "hands-on" Teddy.

Ben, Ericsson and Sue discuss Gary's extravagant spending for the state dinner and whether or not to inform POTUS. "I didn't know they made lampshades out of Unobtainium," Ben remarks. Sue reminds them that Selina has a lot on her plate right now, and it might be a bad idea to add this to her troubles.

Selina arrives at the gaudy, expensive state dinner, and Ben tells her it was Gary's doing. Furthermore, Gary is the one who removed the controversial Native American painting. Selina is livid that the press are focusing on the dinner and painting instead of the groundbreaking peace deal she brokered with Israel.

After the dinner, Selina corners Gary in his office and berates him. She accuses him of having suckered onto her "like a car-window Garfield" and tells him he's worthless. At the end of her tirade, Gary stands up for himself, asking when Catherine's birthday is and whose daughter is in rehab in order to prove how much Selina depends on him. "I'm your calendar, I'm your Google, I'm your Wilson the volleyball," he says, before exploding and begging her to find someone else who would "do what I did" on Labor Day. Selina immediately backs down, acknowledging that Gary is indeed irreplaceable, and the only person she can trust implicitly. Another, more personal, peace deal is tentatively brokered between the two of them.