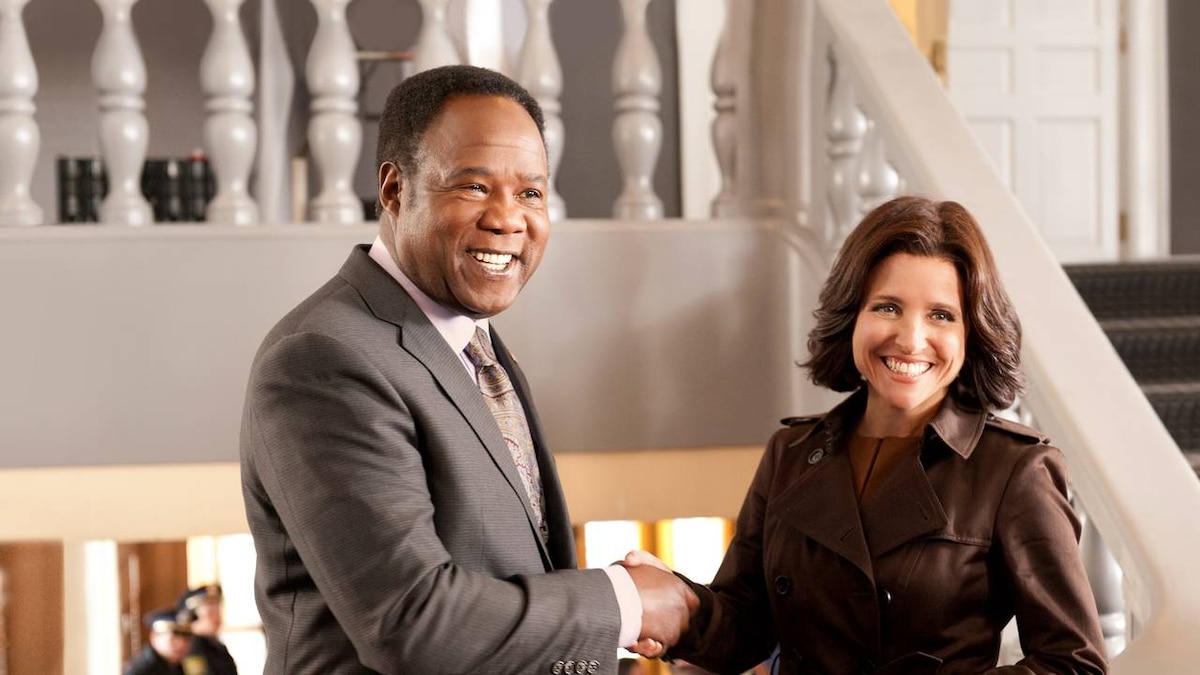 "I want Selina's job announcement on every network. I want to hear the Discovery Channel say, ‘We interrupt these sharks.'" - Dan

Selina, Catherine, and Gary arrive at a Detroit conference center for Employcon, an economic summit, where Selina will be announcing 7,000 new jobs. They are greeted by a mob of angry protesters, yelling and waving anti-big business signs.

Inside, Selina mingles with local business leaders, including a manufacturer of plastic coffee lids and skeleton umbrellas. Amy brings word that there was a shooting across town and among the three dead is journalist Emily Lafuente. "She was a vicious bitch and a f*ckin' drunk," Selina says, before catching herself. "That's sad news."

Selina spots Minna Hakkinen, the former Finnish Prime Minister whose husband, as Gary reminds the Veep, fondled her left breast. Selina and Minna discuss Emily's death, and Minna posits that America "has too many guns." Selina wholeheartedly agrees. "We have a little problem called the Second Amendment," she explains. "People think it's their birthright."

Elsewhere, Mike and Jonah talk about tomorrow's photo op between Maddox and Selina, ostensibly agreeing to no funny business -- just a six-second handshake with a toothy smile to prove they don't hate each other.

Later, Jonah approaches Minna, and Minna, who's under the impression he's a part of Selina's staff, reveals that she agreed with Selina's position that the Second Amendment is a "big problem," and that Selina claimed America has "too many guns."

"The entourage is getting way too big. We are only days away from an omelet chef and a piano tuner." - Amy

In full view of her staff, Selina flirts with her new fitness instructor, Ray Whelans. Mike brings her a statement about Emily's murder to approve, and Ray butts in to try to "simplify" it. Afterwards, Selina pulls Amy aside to tell her she's "f*cking" Ray, which she wants her to hide from the rest of the staff -- especially Dan. However, Dan already knows, as he set the whole thing up to keep her from sleeping with her ex-husband, Andrew. "You're a sex trafficker now," Amy says incredulously. "How low can you go?"

As Selina heads into the conference center to give her jobs announcement, a protestor dressed as the Statue of Liberty breaks through the police barricade, armed with an inflatable dollar sign. He's stopped by Catherine, who lunges and punches him square in the face. Selina and Catherine are hustled out uninjured, and the jobs speech is postponed.

Back in the hotel, Ben quickly deflates any hope of a numbers jump following the attack. Selina's comments about the Second Amendment are all anything the press is talking about. The increasingly high-strung Dan snaps at Selina: "You've just picked a fight with the jumpiest group of people I could possibly think of!"

"This is so humiliating. In years to come, a therapist will have me acting this out with dolls." - Amy

While Gary, Amy, and members of the Secret Service stand outside Selina's hotel room (where she's having loud sex with Ray), Catherine and Andrew drop by to check on her. Andrew insists he has important information pertaining to Selina's jobs announcement but refuses to tell her after spotting a shirtless Ray in her room. "Have you no dignity?" he asks. "Or do you order that in as well?"

Minna, who is staying in the neighboring room, comes to apologize for revealing Selina's Second Amendment comments to the press, but blames the slip on the "leaking gentleman" on Selina's team, whom she describes as Central Europe's "bad companion" to Santa Claus that comes and takes away naughty children's Christmas presents. "It's like a man, but very tall." In other words, Jonah.

"You need to be conservative and liberal. Look at guns, but don't touch guns. Don't even say the word ‘gun.'" - Dan

The next morning, Selina tells the group that Ray had an idea: She should attend a gun show as an act of good faith. Though wary of Ray's idea, the team ultimately agrees that an appearance at a local women's gun show is an excellent idea.

Selina heads to meet Maddox for their photo op. Just as Selina's about to leave, Maddox puts his hand on her back -- exactly the kind of "funny stuff" Jonah agreed not to do. The press is quick to take the bait, suggesting that the Veep "needs a helping hand."

Selina and Catherine attend the gun show, whose attendees are very excited to meet Catherine and take selfies with her. Catherine's further horrified to discover the show is selling t-shirts with her face on them, emblazoned with the slogan, "POW! RIGHT IN THE KISSER!"

"Well, if we kill everybody in the room, we might be okay." - Ben

Andrew finds Selina just before her jobs announcement to tell her that Turville Industries, the company offering the new positions, is defaulting on their loans. Turville has six months left in business at most. "I tried to tell you last night," he explains, "but you had Ray's cock in your ear."

Kent calls to tell Selina her job speech is canceled and it will just be a friendly question-and-answer session with the panel chair. Selina is relieved until she enters the auditorium and discovers her interviewer is Minna. The former Prime Minister unwittingly forces Selina to announce the non-existent jobs and insists the Veep not downplay the announcement's significance. Minna assures Selina -- and the audience -- that the names "Selina Meyer" and "Turville Industries" won't be soon forgotten.