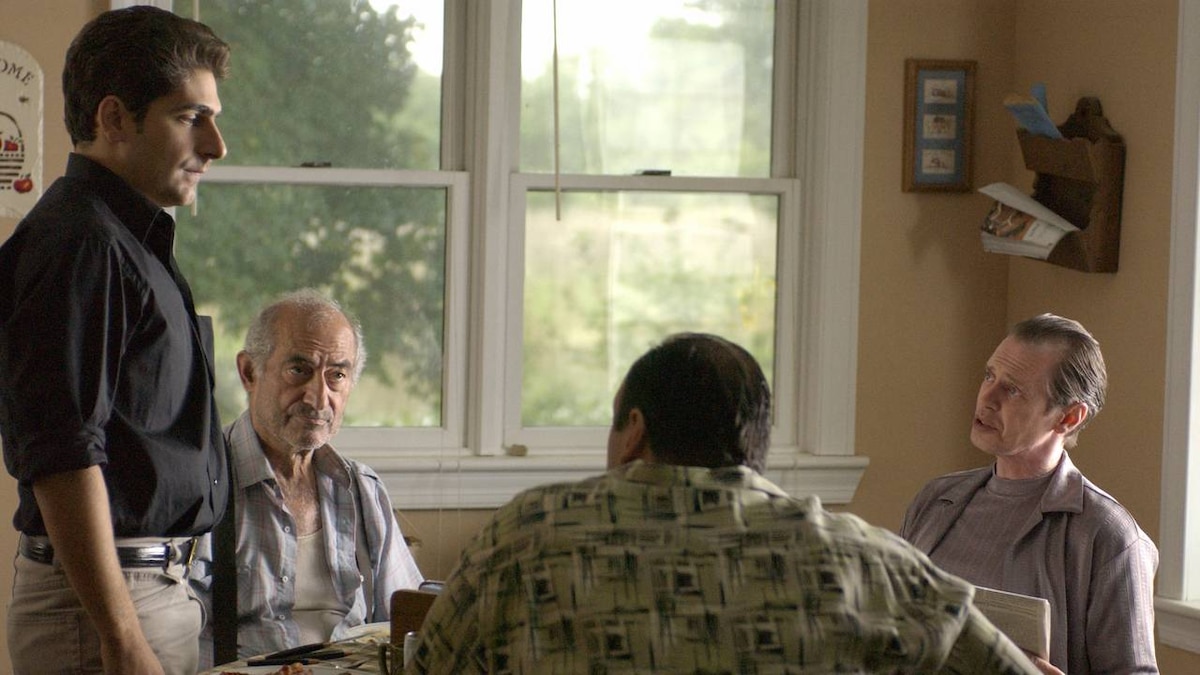 "Our bodies are 86 percent water. His last blood test he was 65 percent zeppola."

At a warehouse on the Hackensack River, Vincent "Vinny Pitts" Pitsaturo and Terry Doria are getting restless. They've been waiting for Johnny Sack's guys to deliver a shipment of Vespa scooters that are to be split between Johnny and Tony. When they sit up all night with no scooters to show for it, Tony wants to know why. Johnny innocently claims he never received the scooters and, despite Tony's skepticism, he stands firm. "Lots of things didn't happen that seem like they happened," he says, "Your cousin didn't whack Joey, the Vespas didn't get into my hands."

Unconvinced, Tony sends Doria and Benny Fazio to the Newark waterfront to get some answers. They catch up to a security guard who, after being worked over with his own nightstick, tells them that the Vespas were collected by a detail headed by Phil Leotardo. When Tony learns that the scooters made it into Johnny's hands after all, he's furious. "It's fuckin' payback," he seethes. Then he uses his own hands to smash a cue stick over the Bada Bing pool table.

Tony isn't the only Soprano giving physical expression to rage. At a peewee soccer game, Janice is incensed when her stepdaughter, Sophia, is tripped by a member of the opposing team. In short order she launches herself onto the tripper's mother and ends up under arrest for assault. More daunting than her legal situation, however, is the ultimatum Janice receives from Bobby. Although he likes "a spitfire type," he can no longer put up with Janice's violent temper and demands she see an anger specialist. "If you don't go to these anger classes they have or whatever," he tells her, "this with us ain't gonna work out."

Her brother, too, wants Janice to learn to cool her temper, if only to keep his name out of the media. But he soon has a more pressing concern. Uncle Pat Blundetto, an old wiseguy who long ago retired to an orchard in upstate New York, has sold his homestead to developers. This poses a problem in that there are three bodies buried on the old man's property and Tony doesn't want to leave them for the new owners. So he dispatches Christopher and Tony Blundetto to dispose of the corpses.

Christopher is not thrilled to be on exhumation duty, especially with Tony B., whom he still views as his rival. But as they work together - disinterring the skeletal remains, shattering them with hammers and then tossing them into the Hudson - the two cousins begin to find common ground. They share their gripes about Tony and make jokes about his growing girth, although they are quick to affirm that they love the guy. "I learned in recovery he's just tamping down his feelings, T, by eating," Christopher says. Tony B. wistfully adds, "It's a shame, he used to be the funnest guy in the world." When Tony S. shows up at Uncle Pat's, the three cousins quickly resume their routine of mutual ball busting.

Back in New Jersey, Tony is surprised to hear that Janice has had some success in her anger management class. He discusses this with Dr. Melfi, who asks whether he'd ever consider taking such a class himself. He brushes off the suggestion, but a couple of later incidents indicate it might not be a bad idea. At the Bada Bing, he attacks Georgie the bartender over an innocuous comment, beating him so badly that he suffers a hearing loss. Then, over Sunday dinner at Janice's, he taunts her about her long-estranged son, Harpo. Janice maintains her composure until Tony asks, "...what's French-Canadian for 'I grew up without a mother?'" Janice explodes, coming at her brother with a fork. Tony leaves her house and heads home, smiling.