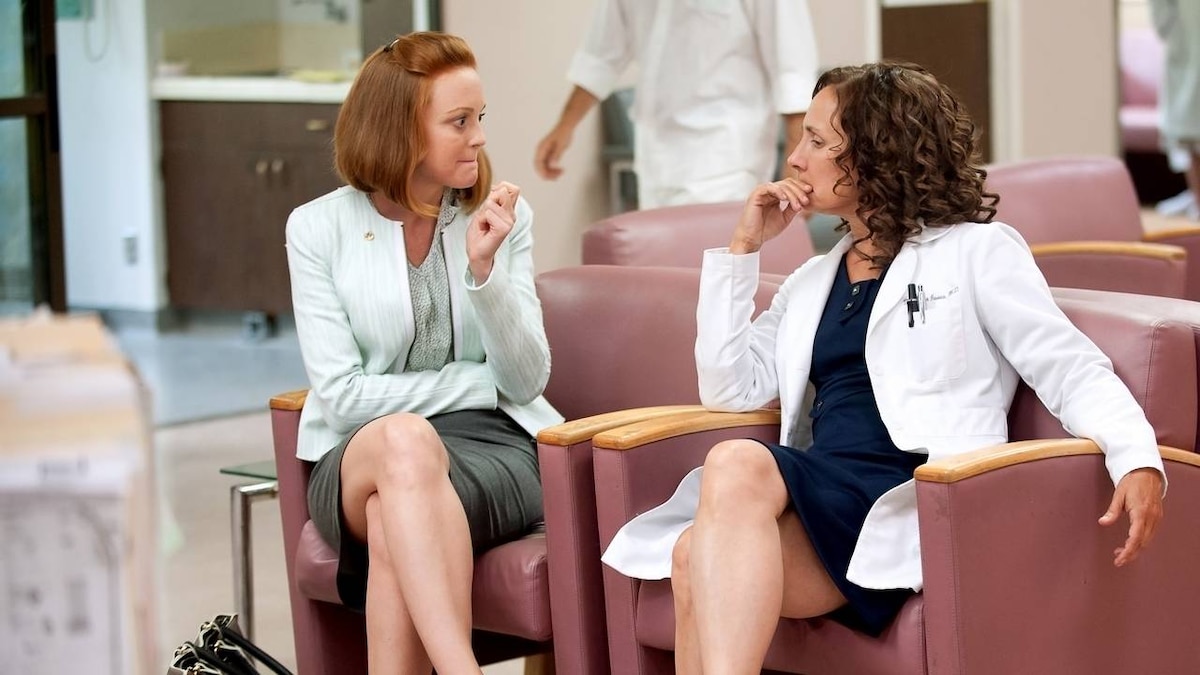 Written by Mark V. Olsen and Will Scheffer
Directed by Howard Deutch

Dr. James undergoes a makeover and stuns the staff with her new look: curly hair extensions, a tight-fitting dress and high heels. She gives Dawn discharge orders for Varla Pounder, their infamously potty-mouthed, bipolar patient; Dr. James wants the bed claimed for the hospice program. Dawn warns that Varla is a "high risk discharge" -- if she's readmitted in 30 days or less, the hospital will be fined.

DiDi's younger half-sister, Sherrie, temps at Billy Barnes, covering for Marguerite. The situation is far from harmonious, as the sisters struggle with their deep-seated resentment of each other.

Patsy learns that he's won the "Millicent Schwartzman Award for Visionary Service," leading him to act more pompous and self-important than usual. Tension continues to build between him and Dawn, following their break-up. Sherrie uses the discord to her advantage, cozying up to Dawn by siding with her against Patsy.

DiDi informs Dr. James that they're overwhelmed with new hospice patients -- which Dr. James deems good news: "scatter-beds galore." After DiDi leaves, Dr. James realizes that she left the lid of one of her live mouse crates ajar and the mice have escaped.

The staff sit down to a potluck lunch, but the good mood is spoiled by Patsy's arrival, as well as Dr. James' pronouncement that Dawn would have made a bad parent and is lucky she's not pregnant. Dr. James, encouraged by Sherrie, badmouths Sherrie and DiDi's irresponsible older sister, whose kids DiDi takes care of. After everyone leaves, DiDi confronts Sherrie about airing their dirty laundry to the group, and warns against her getting close with Dawn because she "has issues." Sherrie refuses to listen; she believes Dawn has "clout" and unlike DiDi, can get her a full-time job.

Dennis, a security guard, responds to Dawn's call for someone to sit and keep Varla contained while they wait for approval to discharge her. In hopes of impressing Dawn, he tells her he's been promoted, before asking her on a date. Dawn admits she's coming off a "really rough patch" and isn't sure if she's ready to date. However, Dennis's kind response appears to change Dawn's mind.

After spotting the silhouette of a mouse in one of the overhead lights, Dawn confronts Dr. James, who refuses to believe the mouse is one of hers. She insists Dawn is making things up, and that she could have easily seen a "small rat" or a "large moth" instead.

Dennis sits in the lounge with Varla, who is worked up and anxious about not being allowed to leave. After observing that Dennis looks like a man with "big balls," she reaches over and grabs his crotch, shouting, "I'm gonna grab your nuts and I'm gonna give them a good licking!" Dawn rushes to his aid, struggling to release Dennis from Varla's vice grip.

DiDi spots Birdy feeding a mouse toast, prompting DiDi, Sherrie and Dawn to chase the rodent through the ward until it escapes through a crack in the wall. Patsy lectures Dr. James about the inherent health risks of loose mice, and while they argue, Varla undresses and attempts to leave the hospital on her own. She winds up trapped, naked, behind a broken automatic door, and the staff is forced to readmit her to the ER.

That night, Dr. James leaves a stack of hospice patient pre-certs and re-certs for DiDi to send out "ASAP." DiDi invites Sherrie over for dinner to see their older sister's kids, but Sherrie refuses: "Those kids are whacked." DiDi confronts Sherrie about her bad attitude, and points out that she raised Sherrie when they were growing up. When DiDi steps away to check on a patient, Sherrie takes the hospice certifications and stuffs them in the trash. Dawn catches her and fires Sherrie on the spot.

When DiDi returns and asks about the hospice paperwork Dawn tells her she mailed it already. She also explains away Sherrie's sudden absence, telling DiDi that her sister wasn't feeling well and decided not to finish out the week. Appreciating Dawn's kindness, DiDi explains that when she said Dawn had issues, she meant "the good kind."