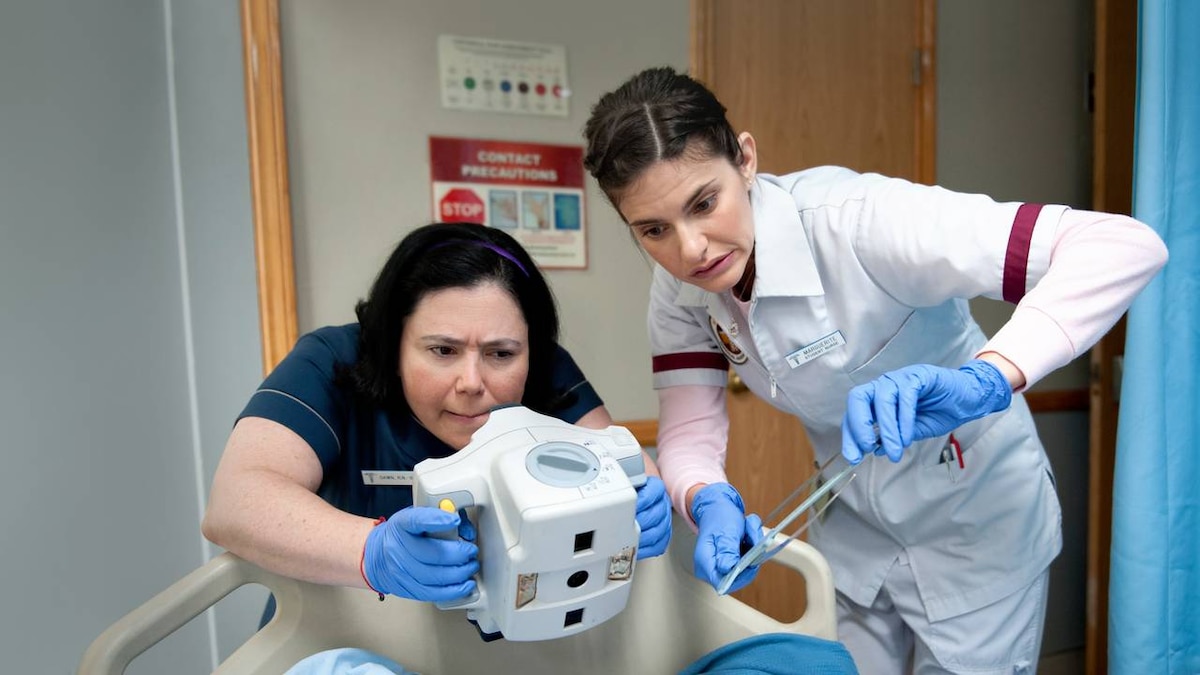 No Such Thing as Idealized Genitalia

Nurse DiDi questions dying patient Mrs. Decker about what she's seeing in the afterlife, as fellow nurse Dawn and the patient's family looks on. After Mrs. Decker passes, Dawn chastises Didi for her behavior: "There's an art to dying, Didi. It's not just a chatty séance."

Dr. Jenna James pulls Dr. Paul Stickley aside to tell him about her "potentially groundbreaking" geriatric anogenital study, as well as her work on vaginal atrophy that she hopes will be lucrative with Big Pharma. She hands him a sheaf of receipts for her research equipment, but Paul is hesitant to push them through.

Dr. James reprimands Dawn for not measuring the perinea of two male patients being released that day. Dawn explains that while she appreciates the opportunity, she wonders if someone else could assume the role of Dr. James' research assistant. However, Dr. James insists Dawn is perfectly capable of handling the task and simply needs to believe in herself.

Supervising nurse Patsy De La Serda addresses the staff about the newly installed "sani-cams," which record contaminating and cleansing "events." The numbers are tabulated at an offshore facility and reported back via a scrolling marquee and he congratulates the staff on a 65 percent hand-washing rate.

DiDi meets with Patsy to discuss the raise she was promised after being with the hospital for four months. Patsy only offers excuses as to why he can't give it to her, but when DiDi reminds him that the LPNs at Memorial are making $17 an hour, he suggests she build an "atta girl file" with the good things her patients have to say to "strengthen" her case.

Dr. James meets with the surly Mrs. Carmaglia, who tells Dr. James she put a curse on her. Dr. James thanks Mrs. Carmaglia for participating in her study on vaginal atrophy, but reminds her that she was discharged 36 hours prior and needs to leave. She apologizes for getting Mrs. Carmaglia's hopes up about a surgery and threatens to send in security if she doesn't vacate her bed.

Dawn meets with Patsy, who insists her feelings of malaise stem from her toxic relationship with Dr. James and encourages her to practice "mindfulness." Dawn reveals that she looked at another apartment for them to share. "You're my lover and my friend," she tells Patsy before leaving.
DiDi tells Dr. James that Suzi Sasso called to confirm their meeting about adding more hospice suites to Billy Barnes, but she won't meet with Suzi until hell freezes over because corporate hospice people are "vultures." Dr. James is further agitated when she discovers that Dr. Stickley and the hospital committee returned her research equipment receipts.

Dr. James calls her colleague Rick Joy to inquire about her expenses, checking to make sure it wasn't the fault of her staff, as she's "saddled with nurse incompetency." Dawn overhears Dr. James tell Rick that one of her nurses is "worthless and the other less worthless."

Dawn and Margeurite Macaw measure and photograph patient Jim Wyman's perineum, per Dr. James' orders. Dawn struggles with the procedure and takes out her frustration with Dr. James on Margeurite.

Dr. James uses the restroom, but struggles with the automatic lights -- part of Patsy's new green initiative -- which shut off the minute she stops moving. She claps her hands until the arrival of Dawn, who she asks to jump around until she finishes up. When Dr. James emerges from the stall and heads to the sink, Dawn notices she's tucked the back of her dress into her pantyhose but keeps her mouth shut.

Later, Dr. James confronts Dawn about the blurry photo of Mr. Wyman's perineum: "For all I know, this could be a snapshot of Carlsbad Caverns," she tells Dawn with disgust. They're interrupted by the arrival of two police officers who've responded to Mrs. Carmaglia's 911 call -- she filed a formal complaint citing Dr. James as abusive, negligent and an "old liar." Dr. James explains that Mrs. Carmaglia participated in her study and they discussed vaginoplasty, but the procedure is not covered by the woman's Medicare or insurance. "You said I'd drive off with a brand new vulva," Mrs. Carmaglia spits. "My p***y is getting fixed, and I'm not getting out of this bed until you do it."

Dr. Stickley drops by Dr. James's office to inform her that he's just been promoted to Director of Medicine for the entire Mount Palms Hospital. He tells her that she needs to hit pause on her research while he figures out his new role. When she reminds him that he coerced her into her current job so that he wouldn't have to take it, Dr. Stickley reminds her that her window to complain has closed: "You'd be complaining about me to me." He reveals that there have been proposals to close Billy Barnes and lease it to a food court; her "carte blanche research ride" is over.

Following her annual physical, Dawn is informed that she's pregnant. When she shares the results with DiDi, she admits she doesn't know who the father is. Taking pity on Dawn, DiDi offers to make them coffee and work on the shift handover notes together, knowing that she'll be late to her son's 16th birthday party.

Desperate for research funds, Dr. James calls Suzi Sasso to discuss how patients might "benefit" from the addition of more hospice comfort suites. She's delighted to learn how much hospice will "enhance her bottom line" by tapping into deceased patients' unused Medicaid benefits.