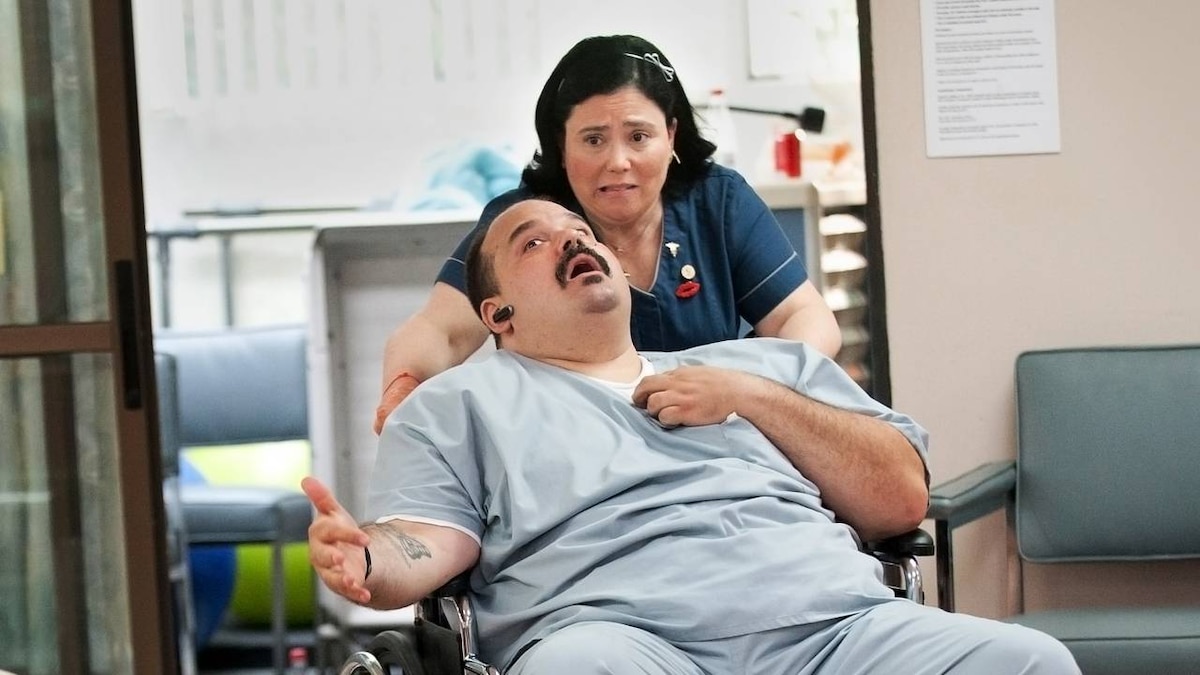 Is Soap a Hazardous Substance?

Dawn drops into union rep Paula Pepperell's office to discuss her maternity benefits and becomes excited when she learns about all her new entitlements. Paula notices that Dawn's hands are extremely raw and chapped -- a result of the harsh sanitizing fluid in Patsy's newly installed sani-cams.

DiDi asks Dawn if she's prepared to be a single mom. Dawn tells her that while she doesn't know who the father is, she knows who'll make the best one -- while throwing glances at Patsy. Meanwhile, Dr. James meets with Suzi Sasso, who explains the variety of "kick-backs" she will receive with hospice care implementation. Following their meeting, Dr. James asks DiDi if she's informed Dawn of her new role as "hospice nurse liaison" -- which she has not. Adding insult to injury, she also presents Dawn with a young male resident who's stepped up to aid her research and is excited to "sink his teeth into vaginal atrophy."

On her rounds, Dr. James meets Dottie Levy, an alcoholic who's had four staples put into her head following a grade-3 concussion. Dawn informs Dr. James that Dottie had six liters of fluid removed from her abdomen -- a symptom of severe alcohol-related disease. Dr. James informs Dottie that she only has 10 percent liver function, 20 percent kidney function, and it's a miracle she's still alive. In the face of Dottie's continued irreverence regarding her condition, Dr. James encourages her to use her time in the hospital to stop drinking; her body is shutting down in every conceivable way.

Patsy confronts Dawn about a Health & Welfare meeting that's been called to discuss his sani-cams. "Are your hands really that sensitive?" he asks. Dawn explains it was Paula, not her, that complained. "I would cleanse my hands to the bone for you, you know I would!" Dawn says. With Patsy placated, Dawn reveals that she found them a great apartment -- and she already put down a two-month deposit. Patsy balks, claiming that he believed they were only looking -- and runs off before Dawn can tell him about the pregnancy.

Ellen Weller's daughter-in-law, Arlene Willy-Weller, confronts Dr. James about taking Mrs. Weller off of a certain medication. After providing an explanation, Dr. James inquires about dots she saw on Mrs. Weller's chest scan. Arlene tells her that they're innocuous -- simply "Nebraska dots" -- and the result of something airborne from a hog-lot.

DiDi catches Dottie Levy rooting through drawers looking to for painkillers. DiDi struggles to calm down Dottie, who refuses to be serious about the possibility that her alcoholism will kill her. Before walking away, DiDi tells her that the hospital offers a variety of staff to support her condition. Seemingly having had a change of heart, Dottie asks to contact her former reverend so that she can try to make peace with her life.

While eating a snack in the lounge, Dawn watches as Patsy stumbles through the ward clutching his left arm before crashing to the floor. Patsy believes he's having a heart attack, but refuses to let Dawn call down to cardiology -- the hospital has been firing staff with high BMIs, and he recently clocked in at a whopping 33 percent. After rushing him in a wheelchair to an open hospital bed, Dawn locates Dr. James and asks her to examine Patsy. Though exasperated with his refusal to be seen by in-house staff, she agrees to run tests to rule out a heart event. However, Dr. James makes no bones about what she believes is really going on: "I strongly suspect what we're dealing with is another middle-aged man who ought to diet, exercise more, eat less, who's monopolizing nursing staff and medical resources with phantom chest pains when there are far more pressing uses for this bed."

Overhearing raucous laughter from Dottie Levy's bed, DiDi discovers Dottie and her friend Reverend Margaret, drunk and unruly, swigging from an enormous vodka bottle the Reverend snuck in. When confronted by DiDi, the Reverend explains her actions: "I'm improving her mental health by not demanding she give up drinking because clearly she likes it." Drawn in by the commotion, Dr. James helps DiDi separate the two women and forces Dottie back into her bed. Dottie defiantly plants a messy kiss on Dr. James while she holds her down.

Later, Dr. James reviews hospice documents with DiDi. They're interrupted by Arlene Willy-Weller, who after unsuccessfully trying to reach Dr. James through the main line, inquires directly about her mother-in-law's condition. Dr. James reveals that the "Nebraska dots" are actually tumors, and suggests Arlene may wish to consult with Ellen's son -- Arlene's husband -- on how to proceed. Arlene admits her husband actually died four months earlier -- she's been lying to Ellen that her son is alive. Arlene is alone in caring for a woman who once told her she "wasn't worth the powder" it would take to blow her up. Dr. James sympathizes, admitting that her mother-in-law called her "an angry f**king c*nt at Thanksgiving."

Dawn finds Patsy resting in the lounge and delivers his lab results -- he's completely fine and Dr. James believes he just had a panic attack. Patsy says her news about their apartment is what did him in, but Dawn insists it's just the thing he needs to ground him.

At the Health & Welfare meeting, Patsy fights back, claiming he feels that his program is being ambushed. Paula Pepperell insists that they need to dig deeper about the effects the alcohol in the sanitizer could be having on staff, revealing Dawn's condition when she questions whether or not she may be risking fetal alcohol syndrome. After the meeting, Dawn and Patsy talk about the pregnancy. "This is not how I wanted to tell you. I wanted it to be in water, with candles and music," Dawn laments. Shell-shocked, Patsy repeats empty lines about having respect for Dawn's body and choices, though he's unsure about being "co-parents" with her.

After hours, Dottie Levy wanders the halls of the Billy Barnes ward, drinking the hand sanitizer from the dispensers in order to get her alcohol fix.

Desperate for the last drops, she wrenches a dispenser off the wall, but the effort sends her toppling backwards. She cracks her already-wounded head on the floor and dies.