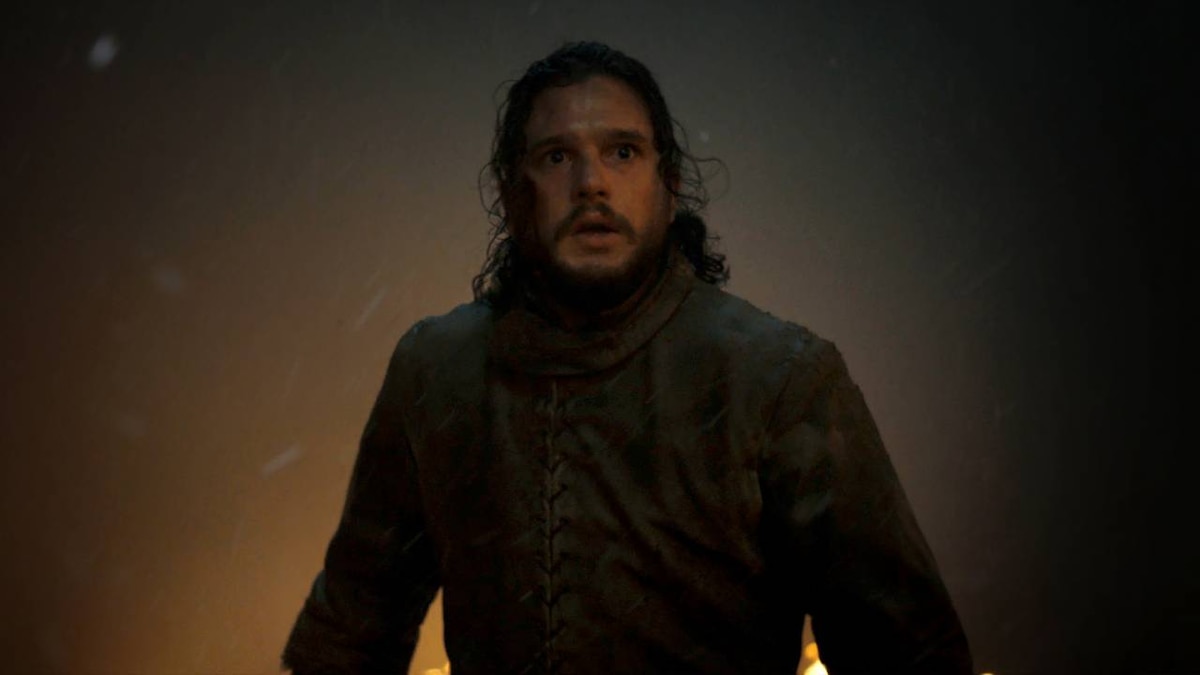 Winterfell awaits the Army of the Dead: Jon and Daenerys fly the dragons to a hill overlooking the battlefield; Sansa and Arya keep watch from the battlements; Theon and his Ironborn take Bran to the Godswood; on horseback, Jorah leads the Dothraki horde, the first line of defense. A lone rider approaches — Melisandre. Taking hold of a Dothraki arakh, she sets the horde's weapons ablaze, and continues on to the castle. Davos is conflicted by her presence, but she assures him there is no need to execute her, as she will be "dead before the dawn."

Horns blast, and the Dothraki set off. Those still waiting at Winterfell watch in terror as the blazing arakhs disappear one by one and only a few horses, Dothraki fighters, and Jorah return. The massive wight army appears behind them and tears into the defending line. Brienne and Jaime try to hold their ground; Arya and Sansa watch helplessly from the battlements. Daenerys and Jon offer a small respite by mounting their dragons and blasting the wight army with flames, but are soon blinded by an immense storm.

Arya tells her sister it's time for her to shelter in the crypts. Sansa hesitates, wanting to remain with her people, but reluctantly agrees to follow the original plan. Arya hands her a dragonglass dagger, with simple instructions: "Stick them with the pointy end."

The battle continues on the ground. Sam, out of his depths, is narrowly rescued by Edd. Turning to thanks his Night's Watch brother, Sam watches in horror as Edd is stabbed from behind. The troops are ordered to fall back. Lyanna Mormont instructs her men to open and protect the gate as Grey Worm's Unsullied guard the retreat. Shooting arrows from above, Arya protects the Hound from oncoming wights.

Davos waves two torches to signal to Daenerys and Jon to ignite the massive trench around Winterfell, but they are unable to see through the fog. Desperate, the archers shoot flaming arrows at the trench, but the wet kindling will not spark. Melisandre steps into the fray, flanked by Unsullied. Kneeling and muttering in Valyrian, she struggles but finally lights the trench, creating a growing wall of flame. The wights stop and stand their ground…waiting.

"It's the most heroic thing we can do now: look the truth in the face." — Sansa Stark

In the crypts, Tyrion is frustrated he isn't on the battlefield possibly spotting something helpful that the others wouldn't notice. Sansa forces him to admit they are of no use in battle. The two of them reflect on their marriage, and while Sansa notes Tyrion was the best of her husbands, his loyalty to the Dragon Queen would have caused issues. Irritated by this remark, Missandei moves to another place in the crypt.

In the Godswood, Theon tries to apologize to Bran for his past behavior, but Bran tells him it all brought him to where he belongs: home. Bran wargs, flying a group of ravens into the air, and sees the Night King approaching on Viserion.

The Night King commands the mindless wights to jump into the flaming trench. As the bodies pile up, Davos realizes they have started to smother sections of the fire. The wights break through the flames and start climbing the castle walls. Gendry, Jamie, Brienne, Grey Worm, Jorah, and Sam fight off the flow of wights atop the walls. Arya's training kicks into full gear as she, too, fights the dead army, but the stream is unending. She falls and hits her head, fleeing unsteadily.

The Hound, frozen by his certainty of impending death, ignores Beric Dondarrion's cries for assistance until he sees Arya needing help above. He takes off in her direction, followed by Beric.

Lyanna Mormont and her men do their best to protect the gate, but the young warrior meets her match when a giant wight comes crashing through. Knocked aside, she rallies, rushing the enormous creature. The giant picks up the small girl, slowly crushing her, but not before she stabs it in the eye to kill it as her final act.

"What do we say to the God of Death?" — Melisandre

Arya tries to avoid roaming wights by hiding in the stacks of Winterfell's library. She makes her way from one side to the other, thinking the worst is over, until a new group breaks through in the hallway and pins her to the ground. The Hound and Beric rush to her aid. Beric dies shielding the Hound and Arya, who narrowly escape with their lives. They discover Melisandre in the Great Hall, and the priestess reminds the girl of the prediction she voiced long ago: Arya would close many eyes, brown, green … and blue. Understanding, the young Stark rushes off.

The Night King uses Viserion's flames to blast a hole in Winterfell's wall. Rhaegal and Jon barrel into them. As the dragons fight; Rhaegal feels the blows more significantly than his dead brother. Daenerys and Drogon knock into Viserion, causing the Night King to fall from his ride. His wing injured, Rhaegal topples to the ground.

Still in the air, Daenerys faces off with the Night King. "Dracarys," she commands Drogon, who blasts the leader of the Army of the Dead with full force. She is shocked when the Night King emerges from the flames unharmed. He raises his spear, and she takes off.

Jon makes his way towards the Night King as quickly as he can on foot. Fear in his eyes, he watches as his enemy raises his arms, and the newly dead rise. Daenerys and Drogon land nearby to help, and Jon sets off toward the Godswood as Drogon is attacked by wights.

Daenerys, thrown to the ground, is unable to do anything but watch as her dragon flies off. Jorah arrives to fight for his khaleesi. Daenerys grabs a nearby dragonglass sword to help as her devoted friend defends her valiantly.

The people in the crypt wind up in the fight as the dead begin to break out of their vaults and attack. Tyrion and Sansa give each other a knowing look and take hold of their daggers. Tyrion kisses Sansa's hand, and the two join the battle. Meanwhile, those above ground find themselves fighting both foes they've already killed and former friends reanimated as wights.

The Ironborn fight to protect Bran. Consumed by the brawl, Theon only stops when he realizes he is the last man standing. The wights around the Godswood form a circle, parting for the Night King and his White Walkers. Bran thanks Theon for all he has done, and the redeemed Greyjoy dies in a charge at the Night King.

Time running out, Jon's path to the Godswood is blocked by Viserion. With little choice, he faces the dragon.

The Night King approaches Bran slowly and triumphantly. He reaches for his sword, but someone comes hurtling through the air: Arya. The Night King grabs the girl by her neck to block her attack, but she drops her raised Valyrian steel dagger to her other hand and stabs the blade deep into her enemy. The Night King shatters and Viserion collapses. The Army of the Dead drops. The war is over.

Jorah falls to the ground. Assured Daenerys is safe, he succumbs to his wounds. She cries over her friend, joined by a mournful Drogon.

Her role fulfilled, Melisandre walks from Winterfell towards the horizon. She removes her necklace and begins to age rapidly, finally turning to dust.

2.A Knight of the Seven Kingdoms

Jaime argues his case before a skeptical audience.

Arya looks to prove her worth as a fighter.

4.The Last of the Starks

In the wake of a costly victory, Jon and Daenerys look to the south as Tyrion eyes a compromise that could save countless lives.

Daenerys and Cersei weigh their options as an epic conflict looms at King’s Landing.

Series finale. The fate of the Seven Kingdoms is at stake as the final chapter of Game of Thrones is written.