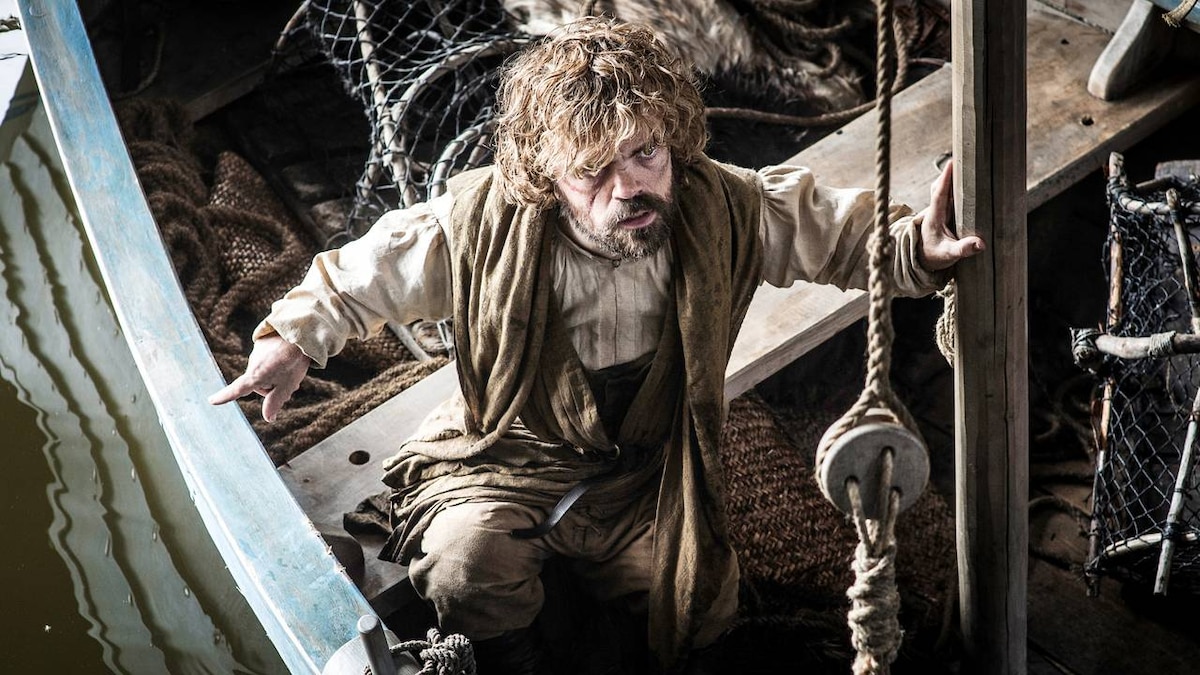 Missandei visits a bedridden Grey Worm and delivers news of Ser Barristan Selmy's death. The Unsullied warrior is ashamed – not of his defeat, but because he was afraid he would never see Missandei again. She climbs into his bed and kisses him.

As Ser Barristan's body lies in state, Daenerys Targaryen commands that the leaders of the great Meereenese families be brought before her. She leads the group into the catacombs where her two dragons remain chained. On her order, a former master is fed to the creatures. Perhaps the dragons should determine the guilty, Dany muses, her hand on Hizdahr zo Loraq. "Valar morghulis," Hizdahr replies. Dany spares him and ends the display.

Drawn into Dany's debate between mercy and revenge, Missandei advises her queen to trust the decision that she alone sees. The queen visits Hizdahr in a cell, where he begs for his life. "I was wrong," Dany tells him and agrees to reopen the fighting pits. To solidify her bond with the Meereenese, Dany reveals that she will marry the head of a great family – Hizdahr.

Samwell Tarly reads news of the rebellion in Slaver's Bay to Maester Aemon who laments, "A Targaryen alone in the world is a terrible thing."

Jon Snow privately consults Aemon about a decision he knows will divide the Watch. The wise man encourages the new Lord Commander to be courageous in his leadership. "Kill the boy," Aemon tells Jon, "and let the man be born."

Jon Snow approaches Tormund with a proposition: He will rescue the wildlings north of the Wall and allow them to settle on southern lands – in exchange for their aid fighting the White Walkers. "Make peace to save your people," Jon urges as he unchains him. Tormund agrees to evacuate Hardhome, the village where the wildlings took refuge, but the Lord Commander himself will have to present the idea.

The men of the Night's Watch are not receptive to Lord Commander Snow's proposal – "We can learn to live with the wildlings, or we can add them to the Army of the Dead" – and only Samwell stands behind him. Jon's steward, Olly, is particularly upset, as wildlings slaughtered his parents.

Brienne of Tarth looks at Winterfell from afar, watching for Sansa. Identifying herself as a Stark loyalist, Brienne recruits an old man to help deliver a message. Later at Winterfell, the old servant woman returns to Lady Stark. Should Sansa ever need help, the woman explains, she should light a candle in Winterfell's broken tower.

Myranda, Ramsay's lover, expresses concern about his impending marriage to Sansa. "Jealousy bores me," he tells her. Myranda approaches Sansa and offers something to "help her remember" her past. She leads Sansa to the kennels, where Sansa discovers Theon Greyjoy in his reduced state. Later, Theon confesses the encounter to Ramsay, who commands his pet to get on his knees. "I forgive you," he tells a tearful Theon.

At a family dinner, Ramsay makes a show of toasting to his marriage with Sansa and parading out Theon as a wine bearer. He's a new person, Ramsay tells Sansa, introducing him as Reek. As the table squirms with discomfort, Ramsay forces Theon to apologize for murdering Bran and Rickon Stark, and then announces that Reek will give away Sansa at her wedding. Ramsay is satisfied with the show, until Roose makes an announcement: Walda is expecting.

"I'm your son, until a better alternative comes along," Ramsay says to his father in private. Roose shares a story in response: Roose raped Ramsay's mother for marrying without his consent. When she brought her squalling baby to Roose, he spared Ramsay's life, recognizing instantly that he was his son. Rallied, Ramsay swears to help defend Winterfell from Stannis Baratheon.

Samwell Tarly and Gilly explore the Night's Watch library, and he admits that before joining the Watch, he dreamt of becoming a maester. They are interrupted by Stannis, who recognizes Sam: "I'm told you killed a White Walker." Sam discloses that he used a dragonglass dagger. Stannis encourages him to "keep reading" – they must be ready when the army of the dead arrives.

Stannis tells Davos Seaworth that it's time to march for Winterfell – including Queen Selyse and Princess Shireen. The next morning, Jon bides farewell to Stannis and the army marches south.

Jorah Mormont and Tyrion Lannister sail for Meereen. Jorah navigates them through the ruins of Valyria, feared by pirates since the Doom – a mysterious cataclysm that abruptly destroyed the civilization. The sight of Drogon flying ahead awes both men.

Jorah and Tyrion are startled when their skiff is attacked by Stone Men infected with greyscale. Jorah fights back, but Tyrion is still bound and is pushed overboard. Jorah gets him to shore and decides to continue their journey on foot. Leaving Tyrion to rest, Jorah examines his wrist – and sees the first signs of greyscale.