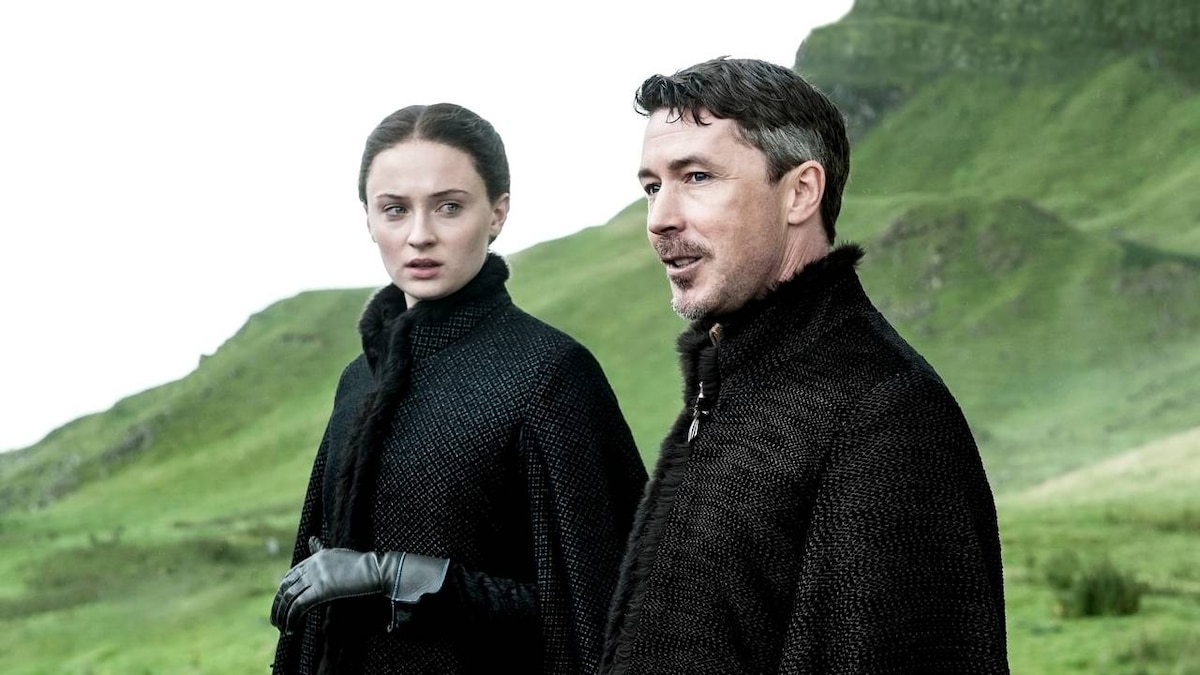 Arya sweeps the atrium of the House of Black and White where worshippers kneel before the many icons. Jaqen H'ghar offers a man water from the fountain in the room's center. "Valar morghulis," says the man who drinks from the cup. Having observed everything around her, Arya confronts Jaqen and demands to start her apprenticeship. "Valar dohaeris," says Jaqen, reminding her she must serve – and not herself. "To serve well, a girl must become No One." Acolytes carry away the body of the man, now lifeless.

The populace of King's Landing gathers to witness Tommen Baratheon's marriage to Margaery Tyrell. After the marriage is consummated, Margaery tells a breathless Tommen he is "the sweetest king that ever lived." Reflecting on his situation, Tommen confides it's still strange knowing he's king because his brother died – but he doesn't feel guilty about it. Changing the subject to Cersei, Margaery refers to her as a "lioness guarding her cub" and Tommen as "her baby boy." Walking with his mother the next day, Tommen surprises Cersei by asking if she'd be happier in Casterly Rock.

Cersei goes to see Margaery, who is entertaining her Tyrell cousins with stories about Tommen's stamina. Cersei does her best to maintain her smile through their exchange – "What's the proper way to address you? Queen Mother or Dowager Queen?" jabs Margaery.

Theon spots freshly flayed bodies at Winterfell, now under re-construction and flying Bolton banners. In the feast hall, Roose Bolton takes Ramsay to task for flaying resistant bannermen while collecting taxes. Ramsay argues the endeavor was a success: The new Lord Cerwyn paid up. Roose offers another lesson to his now-legitimate son: Marriage is how lasting alliances are made. "I've found the perfect girl to solidify our hold on the North," he tells Ramsay.

Littlefinger surveys Moat Cailin and the North with Sansa, and tells her she's going "home." Aware that the Boltons now hold Winterfell, Sansa realizes the marriage proposal Littlefinger spoke of is for her. Lord Baelish tries to calm Sansa – her marriage to Ramsay will only go through on her say so – but he advises her to recognize the opportunity. She has been a bystander to tragedy since Ned's execution, he says. "You loved your family. Avenge them."

As Sansa is welcomed at Winterfell by Roose and Ramsay, Ramsay's companion Myranda watches jealously with the staff. An old woman shows Sansa to her room, addressing her as "Lady Stark" and adding, "The North remembers."

Brienne and Pod continue to follow Sansa and Littlefinger from a distance – Brienne knows where they are going. Stopping for the evening, Pod tells Brienne how he came to serve Tyrion Lannister: Sentenced to hang, Pod was pardoned and assigned to Tyrion by Lord Tywin when the Lannister learned Podrick was a Payne. Touched by Pod's praise of her skills, Brienne promises she will train him to fight and ride. She then explains how she came to serve Renly Baratheon: Renly saved her from humiliation at the ball her father hosted, asking her to dance while the other guests toyed with her. Brienne admits to Pod she knew that Renly preferred the company of men, but he saved her – and she hasn't forgotten she couldn't save him. "I will avenge King Renly," she tells Pod, naming Stannis as the man responsible.

Jon Snow welcomes Stannis and Davos in his new chambers but turns down Stannis' offer to become Lord of Winterfell. Stannis tells Jon that he'll march for Winterfell in a fortnight – the fate of the wildlings is up to him. The king further advises Jon to send Ser Alliser away on assignment. Davos remains behind to sway Jon and his new steward, Olly. As the "shield that guards the realms of men," the Onion Knight tells them, they are not helping anyone from a "castle at the frozen edge of the world."

A waif in service at the House of Black and White interrogates Arya about her identity and her intentions. She strikes Arya each time Arya lies or fails to answer. Jaqen H'ghar puts a stop to the violence but presses Arya to prove she is not Arya Stark. Chastised, Arya goes to the harbor and tosses over her clothing, the stolen bag of silver, and Jaqen's coin. Arya wavers holding Needle and decides to hide the sword in a pile of rocks instead. Now dressed like the waif, Arya is led by Jaqen through the iron doors in the atrium. She is taken to a room where she and the waif wash a corpse.

From the high table of Castle Black, Jon hands out new assignments. Jon surprises Ser Alliser by naming him First Ranger. Janos Slynt balks at his assignment: command of Greyguard. Slynt dismisses the castle as a ruin and repeatedly refuses to heed Jon's command. At that, Jon calls for Longclaw and Slynt is escorted to the chopping block. Slynt begs for mercy in his final moments, but Jon swings the sword.

Sparrows raid Littlefinger's brothel and parade the High Septon naked through the streets, denouncing him as a sinner. The High Septon turns to the Small Council for justice, telling them that the High Sparrow, leader of the criminals that assaulted him, is a threat to what they hold sacred. Cersei seeks out the High Sparrow and is impressed by his humility. "The faith and the crown are the two pillars that hold up the world," she tells him. "We need to do what's necessary to protect one another."

Returning to the Red Keep, Cersei interrupts Qyburn in his laboratory to send a raven to Littlefinger. As Qyburn pens the missive, a sudden movement on the table behind him sends glass crashing.

While Ramsay thanks Littlefinger, assuring him he would never do anything to hurt Sansa, Roose confronts him about his loyalties. Lord Baelish confides that without Tywin, the Lannisters have lost their luster. Still suspicious, Roose hands over the scroll from Cersei – seal broken. Littlefinger reminds him that the last time the Vale and the North joined forces, "they brought down the greatest dynasty this world has ever known."

Tyrion demands to be let out of the wheelhouse over Varys' protests about his safety. The two of them walk along the Long Bridge of Volantis and watch a Red Priestess, once a slave herself, proselytize for the Dragon Queen. The two proceed to a brothel and note the popularity of a whore dressed as Daenerys. Tyrion talks up a different whore, but is surprised to find himself unable to proceed with the transaction. Excusing himself, he urinates into the river where he is bound and gagged by a stranger. "I'm taking you to the queen," says Jorah Mormont.