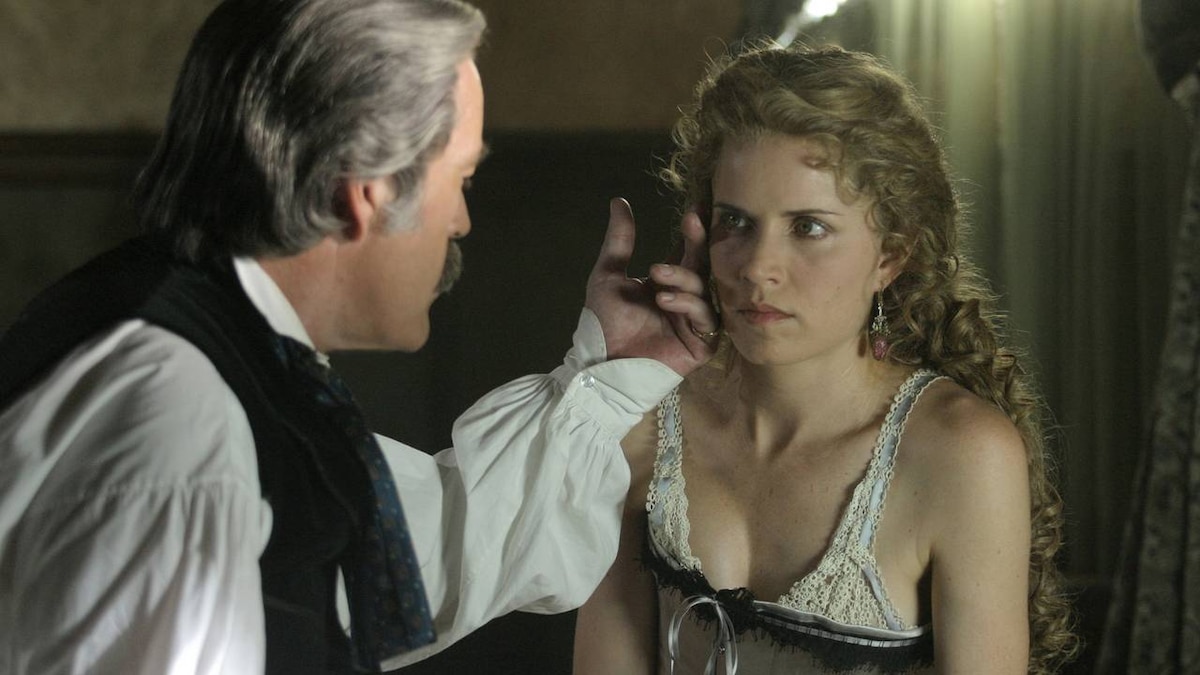 In the Gem's back office, Swearengen rebukes Dority for losing his head over the girl Flora. "You might, Dan, want to learn how to indicate interest in a girl without murdering another person." Also on hand is E.B. Farnum, who is extremely agitated. He suggests murdering Alma Garret and Seth Bullock in their sleep for their unwillingness to sell the widow's claim, but Al and Dority look skeptical.

Celebratory gunshots interrupt, as one of the gangs of men sent for smallpox vaccine has arrived back in town. "We'll be celebratin' a treaty, too, with the f*ckin' heathens," one of them reports to Swearengen, who is very pleased by the news.

Sitting down with Farnum, Swearengen tells the hotelier that with a treaty, their fortunes are bright-the only thing that would ruin things is "unnecessary bloodshed." He also says that Bullock will be "the perfect fucking front man" for the future thriving Deadwood. Much as they want the widow's claim, it's a luxury now to forgo.

A pale Flora arrives at the Bella Union, telling Joanie she's seen a man killed. After some fawning and flirting, she asks the madam if she can stay with her until it's time to get up. Joanie agrees, and ends up holding the girl through the night.

With Andy Cramed keeping order, townspeople line up at Bullock's store to receive the smallpox shot. Bullock meets Alma Garret in line with the Metz girl, and the widow explains that she has decided "for reasons we needn't explore" to return with the child to New York City. She has also decided to take Farnum's last offer for her claim. Bullock, however, refuses to stand off, saying he made a promise to Bill to have the property assayed.

Trixie, meanwhile, has been missing since her blow-up with Alma, and though Swearengen has dispatched people to look for her, it is Doc Cochran who finds her-unconscious on his office floor with an arm full of opium. "You botched the job pretty good," the Doc says to her, and she listens, barely aware, as he suggests going to New York with the widow Garret.

In the morning, Flora dresses for work, and Cy seems suspicious of the girl's professed innocence, a notion borne out when the young girl snarls obscenities at some of the other working girls. Later, when her over-amorous John pesters her, she tells him to "Get away from me before I cut your f*cking heart out."

Flora tells her brother that it's time to hit the Bella Union. "I can move the dyke," she says. "She held me all night like I was a f*cking kid." Miles disagrees, arguing that if they take it slow they can be 50 miles away before they're discovered, but Flora says her boss is onto her. "You're full of shit," he says. "You want to do it fast and dirty so we have to cut somebody's throat."

Swearengen has arranged for Ellsworth to assay the Garret claim, and Bullock, Dority and the old prospector head out to the site. Ellsworth is nervous, but Dority tells him not to worry, and the band soon discovers the huge gold strike. Later Bullock knocks at the widow's door. "Don't sell, Mrs. Garret," he says, and shows her a bag filled with nuggets. . Alma and Bullock discuss her plans; she admits that she would like to stay, but that she has to take care of the girl. "Why can't you care for her here?" he asks.

Later Bullock shares a drink with Swearengen. "If the treaty is signed, it would be wise for you and me to paddle in the same direction," the saloon boss says. Bullock asks him to guarantee Alma Garret's safety, and Swearengen agrees.

Recovering in the Doc's office, Trixie receives a visit from Alma and the girl. The widow tells her that she has decided to stay, but that she would be grateful if Trixie would stay with them. As an alternative, she offers to finance her escape from Deadwood, and gives her a huge nugget as a start. Even the Metz girl adds to the plea, breaking her silence by saying, "Trixie." She then adds her own name: "Sophia." Trixie says she wants to think things through.

Flora tells Joanie she is quitting; moments later she is stealing the madam's jewelry. Joanie is unflustered, but upset, telling the girl to put down the valuables and she'll let her go. "Why don't you let me go, with your things, and shut your fucking mouth," the girl suggests. "Because I remind you of whoever I remind you of." Joanie implores her to stop."You're going to die here," she says, but Flora pulls a knife on her and walks out.

Out in the saloon, Cy Tolliver is not quite so understanding. "It don't feel right to me babe," he says, and slaps her viciously. Flora responds by stabbing him in the leg and making a break with her brother, but they are both quickly captured and savagely beaten in the street. Taking them inside, Tolliver finishes the job, taunting and relentlessly beating the two, and finally shooting Miles. Giving the gun to Joanie, he tells her to put the terribly beaten girl out of her misery. Joanie shoots her and nearly shoots herself, but Tolliver stops her.

When things settle, Cy is apologetic to Joanie, explaining that he did what he had to do. Telling his madam that her happiness is important to him, he offers to set her up in a business of her own. But Joanie is unswayed by the offer. "Kill me too, Cy, or let me go," she says. "If you don't kill me or let me go, I'm going to kill you."

As night comes in, and Alma Garret puts Sophia to bed, she spots Trixie in the street. Doc Cochran, on his rounds, notices her, too. The two watch Trixie as she works her way through the muddy settlement, slowing occasionally until, finally she arrives at her destination, walking through the threshold of the Gem Saloon.