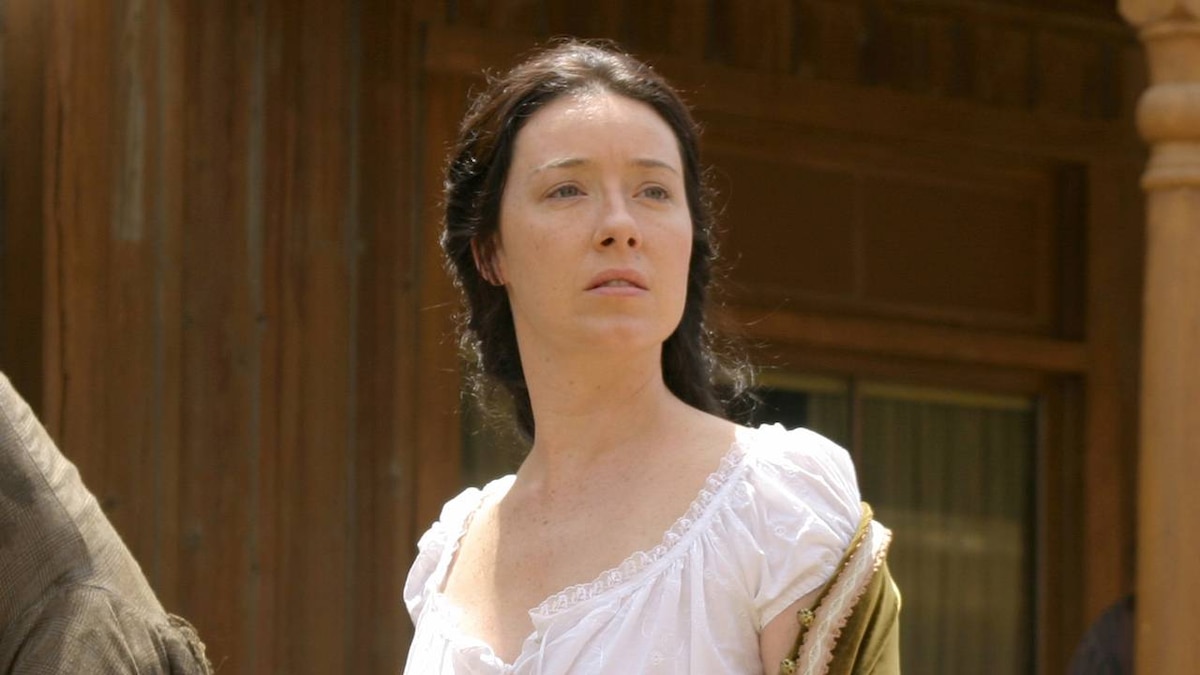 Here Was a Man

"Will you let me go to Hell the way I want to."

McCall and Hickok are back at the poker table, and this time, it's Bill who cleans out the foul-mouthed McCall. Rising from the table, McCall begins a typical stream of insults, but Cy Tolliver stops him, and Bill tosses him a dollar for a meal. Leaving the saloon to get some air, Hickok visits Bullock, who is in the process of building out his hardware store, even at three in the morning. The two exchange quick pleasantries, and the mutual respect between the two is apparent.

In the morning, the body of Brom Garret is returned to Deadwood after his "accident" at the hands of Dan Dority. Alma, his widow, immediately suspects foul play, and enlists Doc Cochran to perform an examination of the body. Her suspicions grow further when the Doctor won't completely rule out foul play, and Farnum, prompted by Swearengen, makes an offer on the claim that's supposed to be pinched out.

Cy Tolliver recruits Doc Cochran to take care of his whores, paying him substantially more than Swearengen does for the same services. Soon after, a man named Mr. Cramed enters into the Bella Union throwing around cash, earning him extra attention and services from Tolliver. Moments later we see that Cramed and Tolliver are acquaintances and have run scams together in the past.

Alma pleads to Wild Bill, begging him to help solve the case of Brom's murder and bring justice to those that may have done her husband wrong. Hickok heads to The Gem to question Swearengen, but as usual, Swearengen is able to deflect any inquiry directed towards him. Hickok takes an alternate approach by intentionally accepting a bribe from Swearengen. Wild Bill takes Swearengen's money and then enlists Bullock to do a review of the Garret gold claim. Bullock agrees to help, but says that he'll need to bring in somebody from Montana to do the work.

Ellsworth comes into town and lets Dority know that he's more than willing to mind his own business regarding the "accident" befalling Brom, if that keeps him from getting murdered himself. Later, Trixie tells Dority to leave Ellsworth alone, and he grudgingly agrees. Meanwhile Swearengen tells Farnum that he believes that "Hickok's got to die if I have to kill him myself..." Shocked, Farnum convinces his boss that he's got too much on his plate for such an ambitious idea.

Back at the hotel, Andy Cramed has fallen ill in his hotel room, and Joanie fetches Doctor Cochran to attend to him. Crame is in bad shape, delirious, and Cochran becomes very concerned.

Exhausted and nearly incoherent, Jack McCall tells the story of his poker showdown with Hickok to his pals at Nuttall's; even these world-weary men are concerned by what they see. Later, returning to the saloon wild-eyed, the long-simmering anger has come to a boil. McCall strides up to the poker table and shoots Hickok in the back of the head. Word spreads quickly through town, as people take to the street, and McCall is immediately apprehended. Drawn almost by instinct, Bullock and Calamity Jane find their way to Nuttall's saloon, but an era has already ended: Wild Bill Hickok is dead.