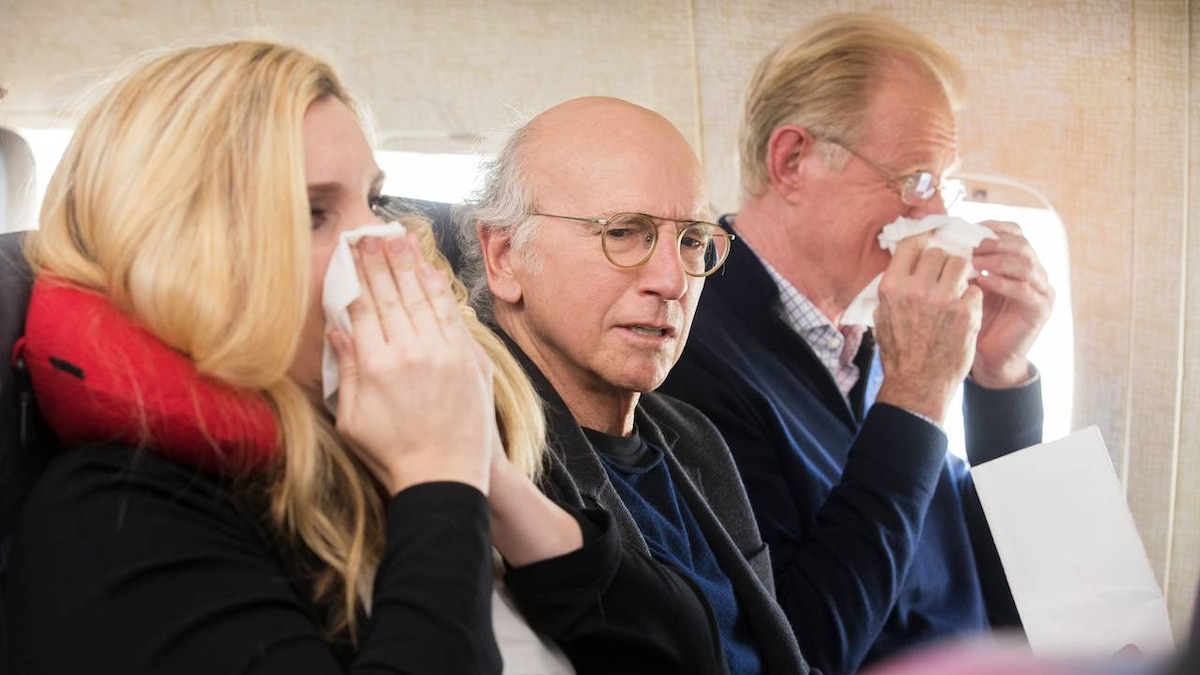 The Accidental Text on Purpose

Traveling, Larry misses his plane by moments. He tries to explain to a flight attendant that he was delayed because of a Sophia Loren movie, but she's having none of it. Larry's forced to take a coach seat on the next plane out. He graciously offers up his aisle seat to a woman who claims to have a bladder condition. As luck would have it, he's seated next to a doctor and fellow member Larry's golf club — Dr. Winacur. During the trip, the doctor decides not to heed the call of duty when a passenger gets sick.

Funkhouser and his new girlfriend, Marilyn, throw a dinner party, hosting Larry, Jeff and Susie, Richard and his girlfriend Rhonda. Larry notes Richard give his girlfriend a "premature honey," but his warning to his friend falls on deaf ears. Over the course of dinner, Larry offends his hostess when he calls her out for serving tap water. She promptly kicks him out of the party.

At lunch, Richard acknowledges Larry was right to warn him about the premature honey. Rhonda has texted saying they need to talk — clearly the relationship is on its last legs. Larry hatches a plan: invite Rhonda to their lunch and start calling everyone honey, thereby removing any weight from the word. The plan works seemlessly.

Jeff, Larry, Funkhouser and Winacur all go golfing. Jeff explains he's stuck driving Susie to the airport and Funkhouser bemoans Marilyn's chilliness since the unfiltered-water debacle. Larry advises both men to send an "accidental text on purpose." Jeff texts Susie a note pretending he's writing to Larry about prioritizing Susie's trip, all in the hopes she'll let him make plans with Larry. Funkhouser sends Marilyn a note pretending to call Larry out for being an asshole. Susie isn't fooled, but Marilyn is immediately won over. Meanwhile, Winacur isn't playing his best game and manufactures a medical emergency he must attend to.

In need of new pants, Larry meets with Richard's girlfriend Rhonda, who happens to be a saleswoman at Neiman Marcus. Things get awkward when Rhonda stays in the dressing room to observe Larry get undressed and try on the pants. To make matters worse, on a return trip to try on the pants once they're properly altered, Larry receives a text from Leon — a video of Sophia Loren undressing. As Rhonda neals to check the hem on the pants, Larry watches the video and gets an "accidental erection." Despite Larry's attempts to explain, Rhonda is mortally offended.

Both Funkhouser and Richard recieve ultimatums from their girlfriends: they have to choose between Larry and their romantic relationships. Both men pick their girlfriends. Unfortunately, everyone is seated at the same table during a golf club event. Over the course of the evening, Richard calls Rhonda his girlfriend prematurely and Marilyn gets wise to the fact Funkhouser sent an "accidental text on purpose." Both relationships come to abrupt ends.