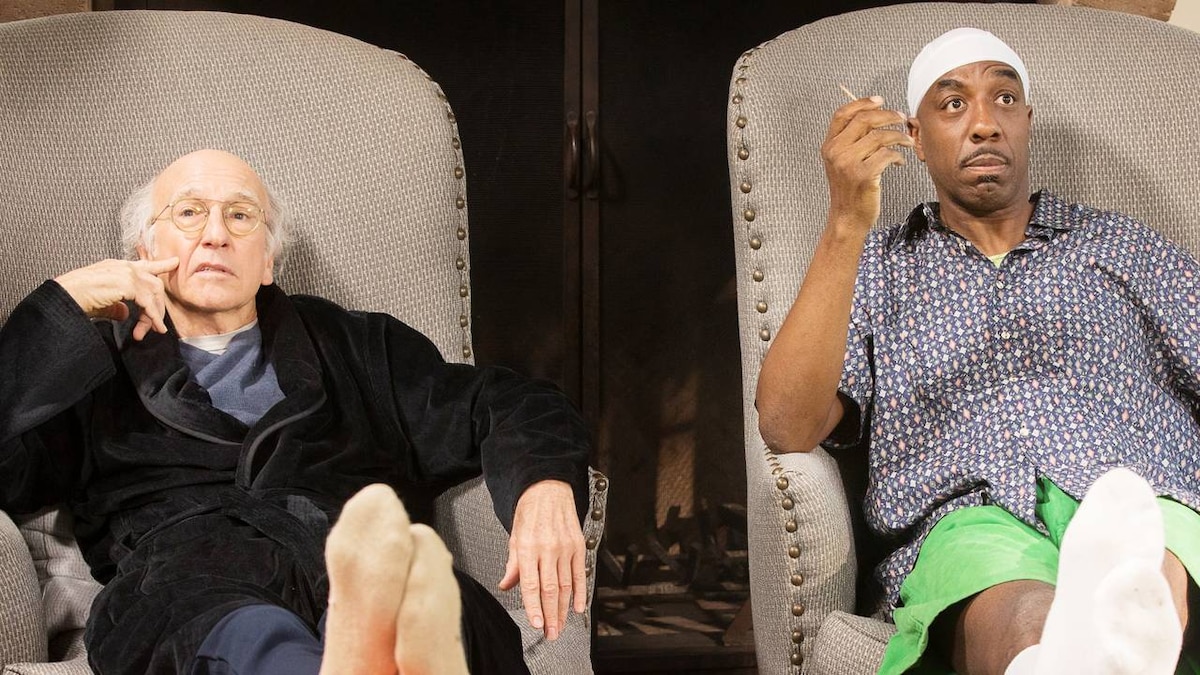 nLeon and Jeff visit Larry, who's holed up at a hotel, convinced he's in danger due to the fatwa. The two prevail over Larry's anxieties and convince him to return home. Heading to check out (disguised in a wig and mustache for safety), Larry runs into an off-duty hooker and convinces her to try a wholesome outfit to drum up more business.

nAt check out, Larry's opining rubs the hotel concierge the wrong way. The two argue over the hotel policy regarding the use of tongs when selecting cookies in the lobby; Larry opts to use his bare hands. Later, when Larry later returns to the hotel in search of a pair of missing pj bottoms, he gets in another cookie confrontation and is banned from the hotel.


nMarty Funkhouser goes to visit Larry at home, bringing along his nephew Kenny, high school All-American pitcher and valedictorian of his class. Things take a turn for the worse when Leon, Funkhouser, Larry and Kenny all head to make sandwiches. A pickle jar proves difficult to open, and everyone wants to be the "hero of the pickle jar." Larry grabs the jar from Kenny, causing the young man to hurt his elbow.

nRecently separated from Mary, Ted swings by the house to ask Larry's permission to date Cheryl. Miffed that Ted didn't just go behind his back, Larry calls Mary on the spot to see if she's interested in going out, given that Ted and Cheryl want to start seeing each other. She lets him down easy.

nAt his favorite Palestinian chicken spot, Larry seeks out the help of his old friend Shara, who puts him in touch with the Consul of Iran. But Larry's new security guard, Swat, mistakes Kenny and the prostitute's assignation for a fatwa attack and storms the room. While Larry video conferences the Consul of Iran, Swat is visibly chasing the half-naked duo around the house — followed by Leon screaming, "Just get rid of the Muslims." Needless to say, the Consul isn't interested in helping Larry.