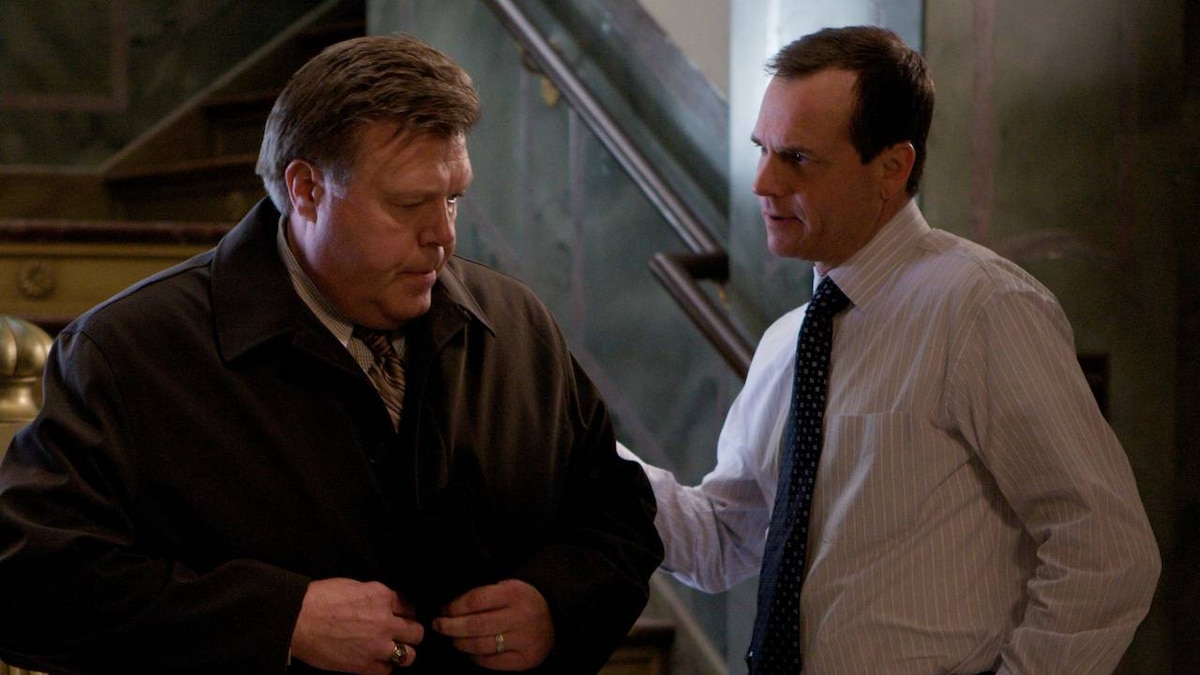 Cara Lynn stops by Margene's who proceeds to grill her about Gary and Greg Ivey. When Margene emphasizes the family doesn't need any more surprises, Cara Lynn promises there won't be.

Barb sits with Lee Hatcher and Bill to review her interrogation by the police. Bill assumes their interest is part of the witch hunt against him, but Lee believes Bill's not the only target. If Bill's untouchable, at least Barb can be charged with procuring.

Nicki persuades a compound wife to return with her. "Don't you want a life like mine?" she asks a hesitant Ileana. Carl approaches Barb – he needs her help getting Pam to quit Goji since Bill hasn't been of any assistance.

Don reveals to Bill that he's been seeing a psychiatrist and is on anti-anxiety meds as a result of the attack on his life.

Furthermore, Alby has offered to buy his Home Plus shares for more than twice their value. When Bill tries to assure Don they'll survive this test too, Don says he just can't take it anymore.

Greg and Cara Lynn look at photos during her tutoring session until Margene enters unexpectedly and watches over the two of them.

Bill enters UEB offices accompanied by Madison Grant. Adaleen tries to refuse him access to Alby but is surprised to see her great-nephew. Bill confronts Alby – he can't run Home Plus out of business. Alby counters that they're pursuing kidnapping charges as well: Nicki has been removing wives from their homes. Bill has the last word when he presents Madison, who tells Alby that he has a copy of the check that Roman gave his parents to drop his charges against Alby. After the two leave, Alby tells Verlan that he wants Bill dead, and Verlan will be the one to lure him in. Verlan insists on a $10,000 fee, half up front, and rejects Alby's offer of other wives.

Barb tries to talk to Margene about Pam and Goji, but Margie is distracted by Cara Lynn, whom she spots trying to sneak out. Margie promises to Barb that everything is fine with Goji and hurries after Cara Lynn. At Greg's condo, Cara Lynn and Greg prepare for an intimate supper together. Expecting a pizza delivery, Greg is surprised to find Marge at the door. Greg tries to deny and then to explain Cara Lynn's presence, but Margene forces Cara Lynn to leave immediately. As they drive home together, Margene refuses to listen to Cara Lynn's explanations.

At home, Nicki scolds Margene for keeping Cara Lynn out so late, but Margene doesn't divulge where the two of them have been. Cara Lynn thanks Margene and tries to defend herself – they're in love, it was the first time for them both, but Margene tells her it's over.

As Barb carefully ices a cake, Heather and Ben enter. Apologizing, Heather reveals what happened at the wedding was her fault: She shared the information with her bishop who then placed calls. Enraged, Barb hurls her cake against the window.

Bill watches 'The Fugitive' with his mother at her home and tells her about the trouble he's in because of Marge. "Hold your head up high," she instructs.

Marge and Nicki bicker about sheets – Nicki has taken Marge's new set to help Ileana set up her new home. Bill hears from Lee Hatcher that a summons has been issued for Margene; ignoring it could endanger the children. Despairing, Margie wails she wishes she were dead. Bill assures his wives that they have found unity in marriage, divorce and adoption – they'll find it in an indictment too.

Admitting all, Cara Lynn begs Ben to stop Margie from telling Nicki what happened. Incredulous, Ben reminds her of the sacrifices the family has made for her. Ileana approaches Barb for a ride to the bus station – she wants to return to the compound – but Nicki intervenes and convinces Ileana she doesn't know what she wants.

Michael Sainte stops Bill in the Capitol to discuss the soccer stadium he wants to build in Sandy. Bill rebuffs him and accuses him of running a pyramid scheme. Sainte warns Bill he told Margie her family didn't seem very supportive of her, further incensing Bill.

Bill talks to Senator Barn about Safety Net, and finds out that attorney general and police have been asking questions about the program which they believe to be a front to protect prophets like the Greenes and the Walkers. Barn tells Bill he's also been questioned about Margene, and faced with this news, Bill asks Barn to send the church a message: Stop and he'll resign.

Barb goes to a church to pray.

Lee coaches Margie about her testimony: Stick to "yes," "no" and "I can't recall." Nicki brings up that she wants her own lawyer when her time comes, someone with her best interests in mind. Barb, Bill and Nicki continue to quarrel – and Barb mentions she knows about their secret resealing. Finally, Margie snaps and says they need to focus on her interrogation.

Adaleen implores Nicki to get Madison out of town – Alby almost killed himself after what happened. Ben advises Nicki to find Cara Lynn counseling, she needs to talk about her father's death.When Nicki refuses, Ben accuses of her being blind and undeserving.

Margie answers all the police questions with "yes," "no" and "I can't recall." When her real birth certificate is shown and Det. Innis suggests that she was targeted by the family, Margie begins to weep and insists that they took her in because they loved her.

Nicki spots Cara Lynn sneaking out the backdoor and Margene enters the backyard as well. Margene insists Cara Lynn tell her mother the truth, and finally Cara Lynn confesses she is in love with Mr. Ivey; it's more than a crush. Horrified, Nicki grabs her daughter and confronts Greg. She threatens to report Greg, and when Cara Lynn calls her bluff, she's taken aback by her daughter's willfulness and asks, "Who are you? Maybe you're just a bad seed after all."

Nicki returns home and finds Bill and Barb debriefing Margene. Bill reveals that he has offered to resign if the church will back down. Barb appeals to Nicki to try and use her influence with Alby to stop his vendetta.

At Juniper Creek, Verlan tells Nicki that Alby has instructed him to kill Bill and warns Nicki to be careful. Nicki confronts her brother and the two of them argue. Alby calls her a whore and Bill a whoremaster; Nicki retaliates by pointing out Dale committed suicide so he wouldn't have to be with Alby. Alby takes his sister hostage.

Sainte talks to Margene and begins quizzing her about her family. Aware that she has no outside friends besides Pam, and that her family is resistant to change, he suggests that the family is actually a cult, and they're all battling for her soul.

Adaleen tries to ask Alby questions, and when he refuses to answer, she asks him to promise he won't hurt anyone, unaware that Nicki is tied up behind a false door.

Bill and Barb try to comfort Margie who is upset that he spoke to Sainte behind her back. Expressing their concern the two give her some literature to review – they think Goji is a cult. Dazed, Margie says that Sainte said the exact same thing about them. "We're not a cult. We're a family," admonishes Bill. Marge leaves in confusion.

Verlan tells Alby he's dug the five-foot hole he wanted, and he'd like his money. Alby reveals he has tapes of Verlan conspiring to kill Don Embrey so there will be no payment. Verlan asks Alby to rethink what he's doing, and to pause to come up with a strategy, but Alby brushes him off: "No one has ever been successfully prosecuted for anything that has ever happened at Juniper Creek."

Margie calls Michael Sainte and quits Goji: Her family is not a cult. Salty, the old-timer in the Capitol building tells Bill he has his support and that everyone deserves a fair shake.

Lee Hatcher informs Bill that the D.A. plans to pursue Bill for statutory rape among other charges, with a possible penalty of 25 years.

Verlan and Alby bring a hooded Nicki to the field where Verlan dug the hole. Verlan and Nicki plead with Alby to stop, and as Nicki begs for her life, Alby shoots and kills Verlan who falls into the grave. Alby tells Nicki to return Bill and tell him he's next.

Bill is explaining his situation to Barb and Marge when a disheveled Nicki walks in.