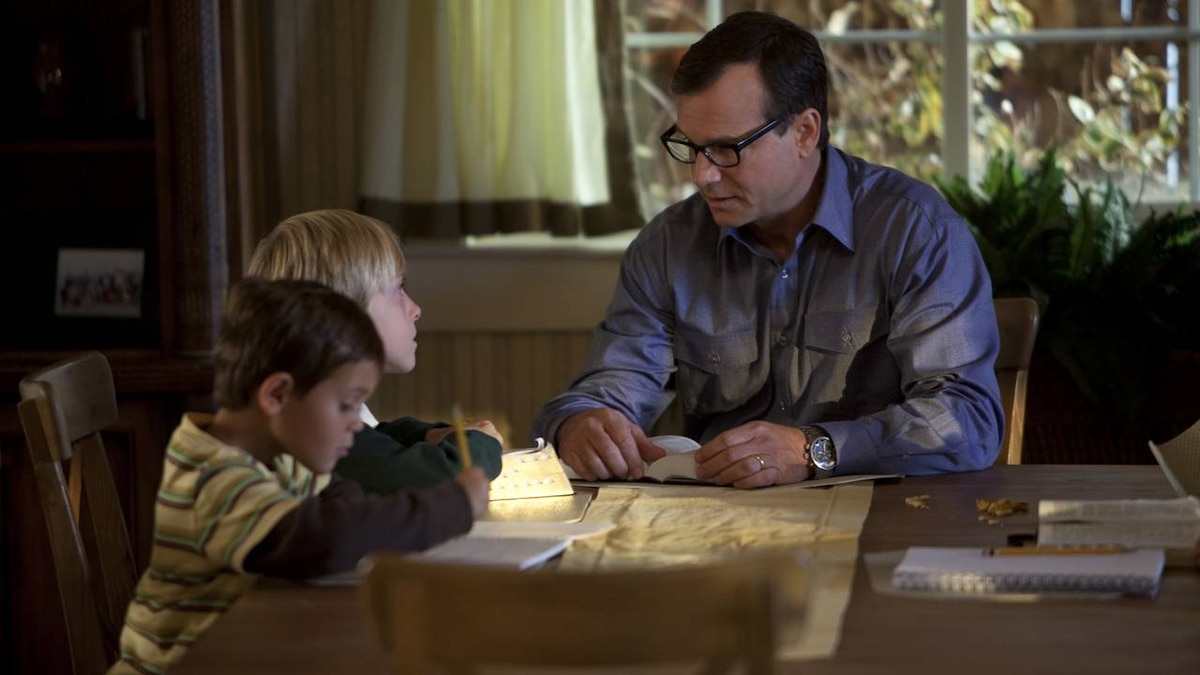 A Seat at the Table

Bill gives the younger kids a lesson from the gospel about giving people time to learn to love. Because Cara Lynn is preparing for her upcoming math competition, Margene excuses her from dinner, to Nicki's irritation. Margene gives her sister-wives samples of Goji Blast, which she's interested in distributing, but neither of them is impressed by its taste.

Adaleen sees a new gynecologist about resuming her hormone therapy to maintain her pregnancy. He warns her about the dangers of carrying the baby to term but Adaleen refuses to hear him out.

Appealing to her as a fellow outsider, Bill speaks to Sister Mary Catherine Angus at a women's shelter about joining him in his Safety Net project.

Barb visits her mother who is volunteering at the local museum. She brings up Nancy's history as a political crusader, standing up for Betty Ford and the ERA, and the tensions that created in her own community. Likening her mother's experience to her current situation, Barb asks Nancy to participate in an upcoming Sunstone symposium about mothers and daughters. Nancy reluctantly agrees.

Ana tells Margene that she can always start her life over someplace else, something Bill overhears. He watches as she rushes to and fro around them and interprets it as evidence that Ana and Goran are bad influences on her. When Ana, sensing the tension, tries to leave early, Margene accidentally knocks her down.

As a favor to Bill, Barb engineers a chance meeting with Midge Buckley, the girl she used to babysit , who is now the representative for Bill's district. Bill asks Barb to set up an evening get-together, but Barb surprises Bill with news that some nights won't work for her: She's taking a dance class.

Nancy confronts Barb when she finds out the Sunstone event is actually to discuss the impact of excommunication on families. She refuses to attend but Barb begs her to reconsider, explaining that she's feeling isolated from her own community and as a Sunstone charter member, Nancy's presence would help ease Barb's way. "There's a vast difference between 'Mommy I need you' and 'I need something from you,' " Nancy reminds her.

Bill goes to see Bud Mayberry to get him to join Safety Net. When Bud says he doesn't care about State matters, Bill reminds him that as a recipient of government assistance, he and the State have a mutual interest in each other.

Cara Lynn wins her math tournament as Nicki watches with pride. Her tutor Greg approaches Nicki and tells her that Cara Lynn is advanced beyond her classmates. Nicki catches Cara Lynn getting a congratulatory kiss from Gary Embry.

Bill checks on Lois at Juniper Creek and is surprised to see a downed tree in her cabin. The rest of the house is equally squalid;Lois blames Frank for her situation.

Margene drives to the location of her childhood trailer and finds it vacant. She later confides to Cara Lynn that she once promised herself she would be something, but is now wondering, "How did I even get here?" She insists that Cara Lynn take whatever opportunities she's given. Barb enters and aware that Margie has been crying, offers to give her a blessing with olive oil. Nicki catches her just as she's about to do so, and is scandalized by Barb's presumption. Barb contends it's no big deal.

Bill changes his tune with Ana about staying and gives her a pair of plane tickets to Serbia, as well as money to help with the transition. "I just want what's best for you," he explains when she accuses him of trying to control her.

Midge and her mother, the Major, join the Henricksons for dinner. Bill tries to sell Midge on Safety Net, but Midge tells him that since his agenda is not something she is comfortable with, they should take it one day at a time. The Major brings up Nancy and Betty Ford, then compares Nicki to Victoria Gotti. When Midge mentions she saw Barb's name on Sunstone's schedule, Barb lies and says it was Nancy's idea to join.

After dinner, Nicki brings up Sunstone to Barb, dismissing them as malcontents and doubters. When Barb leaves, Bill tries to get Nicki to cool off, but Nicki tells him she caught Barb trying to give Margie a blessing. "Barb's not careening," warns Nicki. "Whatever she's up to, it's intentional." He confronts Barb at bedtime, admonishing her for not consulting him about joining Sunstone, or inviting him to dance class. He reminds her that she has to be careful; they live in public now.

Nicki delivers food to Adaleen and is surprised to see her mother is all alone in the Big House – Alby has moved everything out. Nicki tries to talk her into being a part of Safety Net, but Adaleen says she's not a victim. "Sometimes we have to walk from our past, and sometimes we have to embrace it," she says.

Bill convenes the first Safety Net meeting with members from the different polygamist factions and Sister Mary Catherine. Things go bad when Alby and Nicki argue about the educational opportunities for girls on the compound, and the meeting dissolves into multiple quarrels between the separate groups, and protestors who accuse Bill of lying to further polygamy.

On the dais at the Sunstone symposium, Nancy grimaces while Barb discusses the effects of her excommunication. Interjecting, she takes the floor and brings up the choices that led to Barb's excommunication, namely, following Bill into polygamy. The two bicker before Nancy storms off the stage. When Nancy calls Cindy to complain about what just happened, the entire audience hears her conversation because her mic is still on.

Bill and Don rue the PR disaster that was the first Safety Net meeting when Margene storms in. Furious that Bill sent Ana and Goran away, she tells him that choosing her over them might not have been a good idea. She's a "leaky basket" -- and she needs a time out.

Nicki asks Greg to serve as Cara Lynn's math tutor. When he resists, she explains that the two of them were raised on a compound, and her wish is that Cara Lynn lives up to her full potential. Nicki pushes Cara Lynn to study more, and spend less time with Gary.

Armed with cookies, Bill presents them to Senator Barn, who is in conversation with Midge. Midge breaks the news: She's sponsoring legislation -- and it concerns him.

The three wives take advantage of the sales at Home Plus together. Nicki tells Margene to quit interfering with Cara Lynn, but Margene tells her that her over-protectiveness is understandable given what Nicki went through at that age. Nicki's temper worsens when she finds out that it was Barb who gave Cara Lynn a copy of 'Our Bodies, Our Selves.' "I will not have my daughter defile her body the way yours did," she says, causing Barb to flee in tears.

Bill reconvenes the Safety Net leaders in his home. Bud Mayberry accuses Bill of spoiling things when he outed himself, but Bill insists that it's the secrecy that is holding them back: "I'm trying to win a place at the table." Alby breaks the news that all Bill has managed is to bring on a witch hunt; legislation is pending that will make polygamy an impeachable offense and a second degree felony. Alby and Bud denounce the arrogance of Bill's vision.

Barb tries to mend fences with Nancy. Nancy tells her that Ned has forbidden her from seeing Barb, and then comes clean about Betty Ford: Although she championed her initially, Nancy finally bowed to pressure, leaving Betty stranded at the airport when she arrived in town. Barb asks Nancy to give her a blessing, but Nancy is shocked at the audacity of the idea.

Bill and Margene say goodbye to Ana. Bill tells Margene if she needs to leave, she can: "It would kill me if you weren't happy."

Nicki approaches Barb at dance class and apologizes. If anything, she'd like Cara Lynn to be more like Barb. Curious about the dance lessons, Nicki admits to Barb she's never danced before and Barb shows her some steps.