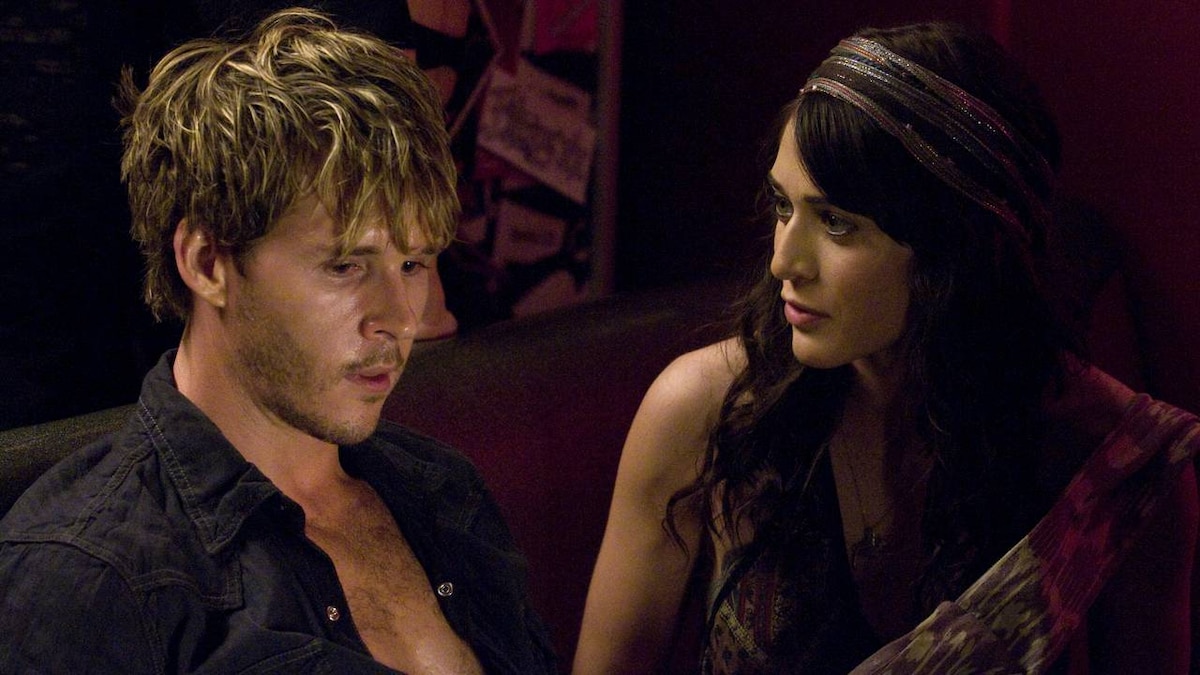 After Sookie experiences her two "firsts" with Bill in front of the fireplace at his house, she soaks in a hot bath, still giddy with the experience she's shared with the vampire sitting next to her. Comfortable in the moment, she takes the opportunity to tell Bill one of her deepest secrets: Her Uncle Bartlett molested her as a child. She's relieved to get it off her chest, though she doesn't notice the glare of violent revenge that creeps across Bill's features.

Jason drops in on Lafayette - interrupting the cook's work on a rapidly escalating video for his porn site - in hopes of picking up some more V. Lafayette recognizes Jason's sweat-drenched desperation as a liability and reminds him of the screw-ups he's already made. Lafayette tells him to leave, but Jason makes a run at the mini-fridge. Big mistake. Lafayette grabs him in a choke hold, applying enough pressure to make it very clear what he's capable of, before throwing Jason out of the house. He heads over to Sookie's, where she soon catches him rounding up Gran's most valuable possessions to hawk. Sookie strips him of most of it, but he manages to get away with a pair of silver candlesticks.

At Tara's house, Lettie Mae explains to her daughter that she needs $445 to pay a woman to remove the demon from her body. Flippant as ever, Tara suggests the demon get a job of its own, but when her mother spills the booze-spiked coffee she's drinking - and licks the mess off her own clothes while weeping that the demon has control of her - Tara seems less assured that her mother is just making more excuses. She heads over to Sam's place to try to smooth things over with him and finds the bar owner in a foul mood while he tries to fix up his dilapidated trailer. She offers a hand, understanding for the first time that the two of them both yearn for the same thing: A real home. But before they can settle into the moment, her cell phone rings with a call from the local bank. Lettie Mae has come in for money and thrown a fit when the loan officer wouldn't give her any. Tara arrives just in time to see her mother call the man a bigot, offer to sleep with him and then begin screaming about the demon inside her. Demon or not, Tara sees that her mother's suffering is real, so she agrees to pay a woman called Miss Jeanette to heal Lettie Mae.

At Merlotte's, Sookie's exuberant mood screams, "I got some," and it doesn't take long for Arlene to extract the news from her coworker, who's hidden Bill's fang marks behind a scarf. But when Arlene brings the gossip to Sam, he loses his cool and rips the scarf from Sookie's neck, condemning her in front of the whole bar. "What I do on my own time is no concern of yours," she shouts at the group.

Jason's search for vampire blood leads him to Fangtasia, where Pam uncovers his intentions and allows him inside to find out exactly the kind of mistake he's made. But a girl named Amy overhears Jason's clumsy - and deadly - attempt to buy V from Longshadow and steps in to save him. Posing as his girlfriend, she drags him aside and intimates that she has some V, but if he mentions it in the bar, he'll get them both killed. They end up at Jason's house, where he has to sit through Amy's speech about Gaia and oneness with the Earth before snorting up a crushed aspirin laced with vamp blood. Once the trip starts, though, it's not long before the two of them are in bed together.

Tara and her mother walk out into the wilderness to meet Miss Jeanette, who takes their money and leads them to the abandoned school bus where she practices her trade. As she places a series of rocks on Lettie Mae and begins chanting, Tara's skepticism begins to subside, and by the time Miss Jeaneatte exorcises the demon and places it into the body of a screaming possum, things are feeling pretty real. After the healer drowns the possum, and Tara and her mother prepare to leave, Miss Jeanette tells Tara that she, too, has a demon. Indignant, Tara laughs her off, but the strange woman asks her, "You have trouble keeping a job? Do you have your own place? Do you have a boyfriend?" Despite herself, Tara considers Jeanette's words.

At Merlotte's, the cruel vampire nest of Diane, Liam and Malcolm barge in, purposely starting trouble. The locals try to stand up to them - with Sam going to far as to snap a pool cue into a makeshift stake - but the vampires are too strong. Just as Sam and Sookie are about to be bitten, Bill shows up, as if summoned by Sookie's fear. The vampires want Bill to join their nest; in fact, all this had been staged purely to get his attention. He leaves with them, telling Sookie he needs to be with his own kind, though it's obviously just a ploy to end the conflict. The locals, however, are not willing to let things go so easily.

Royce, Wayne and Chuck decide to torch the vampires' house, and as they fill beer bottles with gas and drive over, Sookie searches desperately for Bill in his crypt at home. But by the time the makeshift mob strikes at dawn, she still hasn't located him. The three men launch their Molotov cocktails through the house's windows, running off as the vampires' shrieking screams pierce the morning. By the time Sookie arrives at the house, she's far too late - the rescue workers are already pulling four charred coffins from the extinguished blaze.