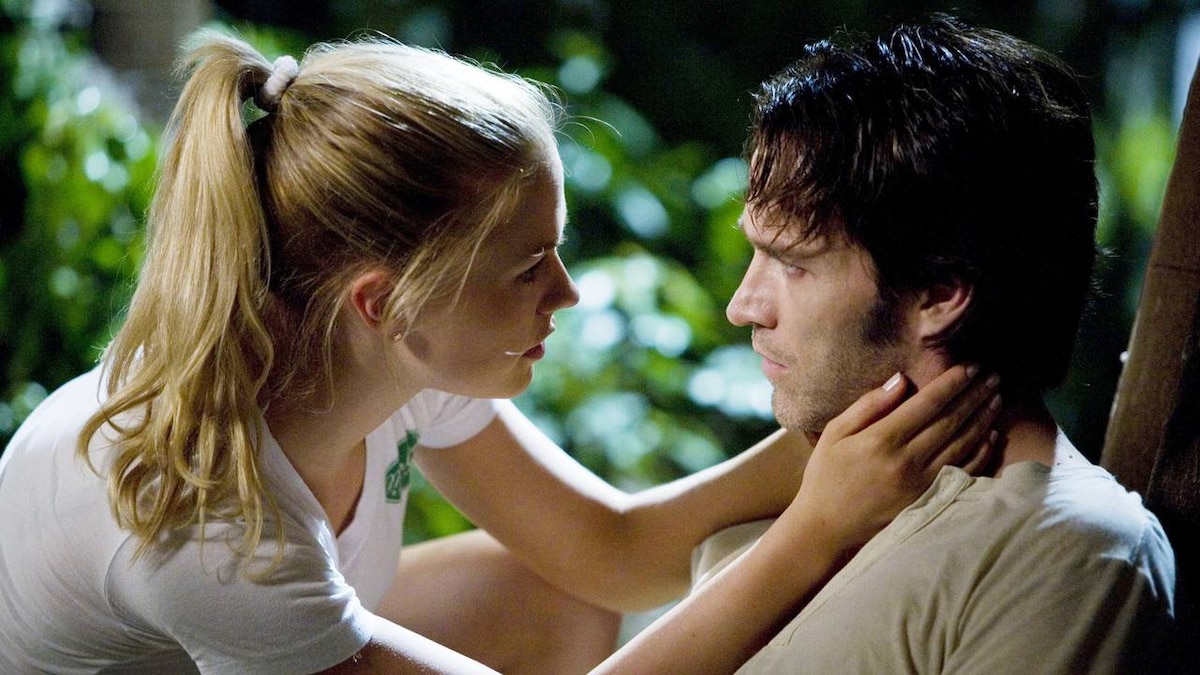 At night on a rural Louisiana highway, a frat boy driving his girlfriend's SUV - while her hand works busily in his lap - notices a neon convenience store sign for Tru Blood and pulls into the lot. Inside, an evil-looking clerk watches Bill Maher interview American Vampire League spokeswoman Nan Flanagan, who deftly parries his questions about vampires' historical violence. "We never owned slaves," she says, "or detonated nuclear weapons. Since the Japanese perfected synthetic blood, which satisfies all our nutritional needs, there is no reason for anyone to fear us."

The frat boy steps up to the counter and smarts off about the vampires of New Orleans drowning during Hurricane Katrina, and the pale, angular clerk replies that vampires can't drown "because we don't breathe." Frozen in terror, the frat boy mumbles an apology, but a moment later the clerk breaks into a goofy cackle, dropping the act and saying how he "totally had them." A camo-clad good ole boy in the back of the store isn't amused, however, and when the frat boy asks the clerk about scoring some drug-like vampire blood, the real vampire in their midst reveals himself - and his fangs. As the frat boy flees with his girlfriend, the good ole boy steps up to the counter, slams down a four-pack of Tru Blood and tells the clerk, "You ever pretend to be one of us again, and I'll kill you. Got it?"

At Merlotte's Bar and Grill, Sookie Stackhouse serves beer and burgers to her customers, hearing snippets of their private thoughts as she makes her rounds. For a moment, the vague, watery musings of everyone in the room seem to close in on her, but she takes a deep breath and banishes the noise. Sookie's boss, Sam Merlotte, pulls her aside to let her know that her friend Tara Thornton is on the phone. Sookie takes the call, apologizing to Sam, only to find out that Tara, a bit of a hothead, has quit her job and is coming to Merlotte's. Another waitress, Dawn Green, catches up with Sookie to warn her that Mack and Denise Rattray - problem customers and even worse human beings - are sitting in her section. She takes their order, trying to ignore Mack's perverted internal assessment of her.

In the kitchen, Sookie tells the cook, Lafayette Reynolds, that it would be perfectly fine if he served the Rattrays' onion rings off the floor. He compliments her makeup, and she responds that she it helps her tips - even though rumors about her "talent" have led the whole town to fear her. Back in the barroom, Tara has arrived and started complaining that she needs a new job. Just as Sookie steps into the discussion, she's distracted by a strange force.

Looking up, she see Bill, a 167-year-old vampire, step into the bar. Laughing nervously, she approaches his table. Sam looks on protectively as Sookie apologizes that Merlotte's is out of Tru Blood - they've just never had a vampire come in. Bill replies, "Am I that obvious?" As Sookie steps away to get him a glass of red wine, the Rattrays lean in to introduce themselves. At the bar, she gushes about Bill to Tara and Sam (who think she's insane for not fearing the vampire) and wonders why "the Rats" are so interested in him.

As the Rattrays continue cozying up to Bill at Merlotte's, Sookie listens in to their thoughts, only to realize that the couple plans on draining Bill's blood for sale on the black market. Tara and Sam assure her that a vampire can take care of himself, but when she notices the Rattrays have left with Bill, she runs to the parking lot, grabbing a heavy chain to use as a weapon. Sure enough, Mack and Denise have snared Bill using fine silver chains, which have burned their way into his skin, and begun draining him a pint at a time. Sookie sneaks up on them and smacks Mack in the head with the chain. When he turns on her with a knife, the chain, as if by magic, wraps itself around his neck. Sookie, too distraught to notice a strange blue-eyed woman nearby vanishing into the night, picks up Mack's dropped knife and focuses on Denise, who collects her wounded husband and leaves, promising, "This ain't over."

Sookie rushes to Bill's side, and after freeing him from the chains, is shocked to watch his burns disappear before her eyes. Though he gruffly thanks her, Bill also probes Sookie's boundaries, first mentioning the "juicy arteries" in her groin then offering to let her keep his drained blood. Both comments disgust her, which seems to please Bill, as if she's passed a test. He asks her to keep his weakness to silver a secret, and she agrees before abruptly returning to work. Sam waits for her outside the bar, and inside, Tara has managed to bully her way into a new job pouring drinks. When Jason enters the bar, appearing nervous and looking for Sookie, Tara softens and says hello, but she immediately scoffs when Jason starts flirting with Dawn.

Sookie goes home and tells her Gran about meeting Bill, leaving out the part about the parking lot brawl. In bed, she has a dream that Bill waits outside her window, but when she comes down to see him, thinking they'll have sex, he extends his fangs to bite her. Unsettled, she wakes up before his teeth sink in.

The next morning, Jason comes by the house to reprimand Sookie for fighting with the Rattrays: Word is already making its way around town. She shoots back that they were going to kill Bill, and though Jason doesn't understand why she'd want to help a vampire, this ends the argument. Over breakfast, Gran answers a phone call and hears that Maudette Pickens was found strangled in her apartment. Jason seems angry and frightened at the news. He leaves for work, but later the police pull up to his road crew to question him about Maudette. Sheriff Bud Dearborne and Detective Andy Bellefleur feel him out before eventually telling him they found a video tape of him having sex with the victim on the night of the murder.

As Sookie puts on her makeup before work, Gran asks her whether she thinks Bill was around during the Civil War. Her historical group, the Descendants of the Glorious Dead, would certainly love to hear a first-person account of the war. Sookie, amused, promises to ask. She gets to Merlotte's just in time to hear all her coworkers discussing Jason's arrest. Frightened - and furious that she's the last person to know - she demands that Jason's friends, Rene Lenier and Hoyt Fortenberry, fill her in on the details. Just as she becomes so worked up that the thoughts in the room start to overwhelm her, Bill walks into the bar. When she greets him, he asks, "What are you?" The vampire has picked up that she's different, but only asks if he can visit her at her home. She consents and then remembers her Gran's request and asks him, "Would you mind meeting me at the back of the bar when I get off at, probably around 1:30?" Bill agrees but, feeling uncomfortable under the gaze of everyone in the bar, decides to leave.

As soon as Bill is gone, Sam pulls Sookie into his office and admonishes her for associating with a vampire: "What do you have, a death wish?" Before she can finish her retort, Tara bursts through the door and delivers a similar message. Hearing their thoughts - Sam's love for her and Tara's concern for Jason - Sookie finally loses her cool and, yelling that she can take care of herself, slams the door on her way out.

Late that night, as she's leaving work, Sookie notices a beat-up car in the parking lot, and just as she places her recognition of it, the Rattrays jump from the shadows and knock her down, kicking viciously. They have every intent to kill her, but all she can do is curl into a fetal position as she spits up blood.