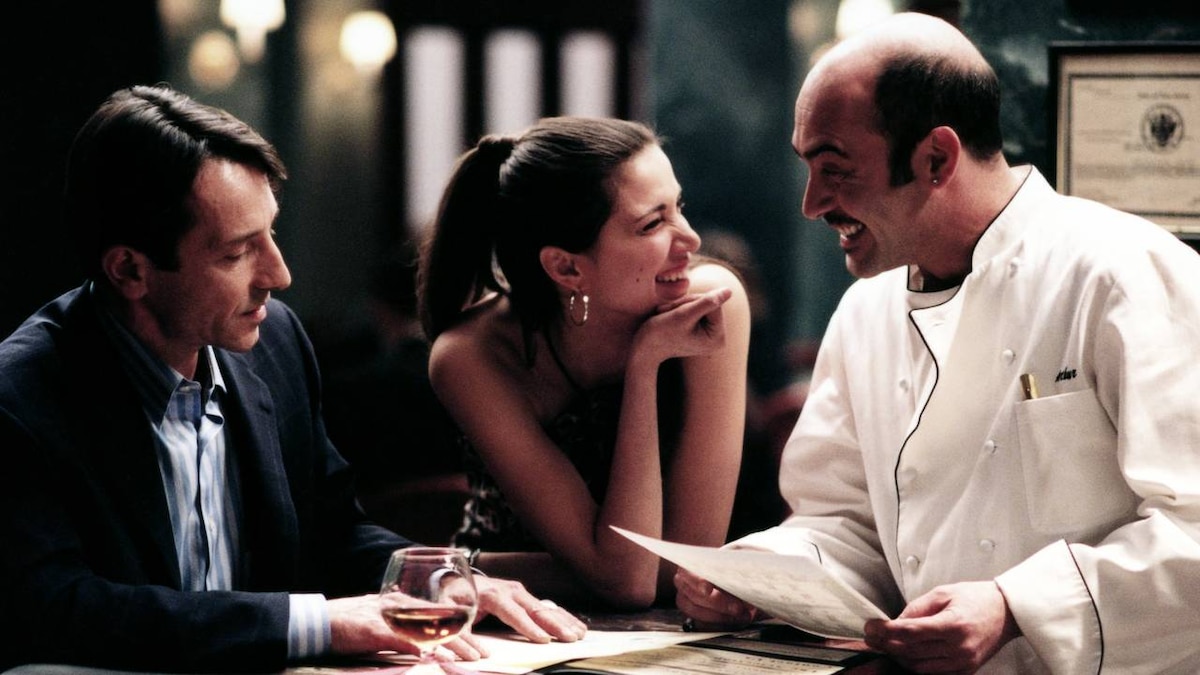 Christopher's at home, on the sofa - and on the nod - when he gets a call from Tony. He wants to see Christopher right away, which gives him all of twenty minutes to put down the syringe and get himself straight. When he shows up at the rendezvous point, both Tony and Furio notice that he's more than a little under the influence. "You been drinking?" Tony asks. Christopher tells him that he and Adriana had "a little wine" that evening, an explanation that Tony seems to accept. Then he gets down to business. "More and more I'm gonna be givin' my orders through you," he tells Christopher. Although one of the other guys might seem like a logical successor, they all have one insurmountable drawback: they're not blood. So Tony tells his heroin addict heir apparent, "You're gonna take this family into the 21st century."

It certainly doesn't look like Tony's progeny are up the task. Even if there weren't the obvious disqualification of gender, Meadow's more interested in her internship at the South Bronx Law Center than anything her father's up to. As for Tony's namesake, he's currently preoccupied with his new girlfriend, Devin Pillsbury, a pretty blonde whose Picasso-filled home makes casa Soprano look like a quaint bungalow. Devin is thrilled to be "a gangster dude's girlfriend," but admits she was a little disappointed that A.J. doesn't live in a compound like the Corleones.

Tony has barely made this step towards securing his future when his past comes back to haunt him in a particularly abrupt and cruel fashion. One night, as she and Tony are getting ready for bed, Carmela shares some gossip. While at Globe Motors she heard that Gloria Trillo, "that nice sales lady," had committed suicide. Tony, to put it mildly, is upset. He goes to the dealership himself, where a salesman tells him that Gloria hanged herself and didn't leave a note. As for her motive, all he could offer was, "I got the impression she wasn't very lucky with men."

Tony, drunk and furious, shows up at Dr. Melfi's hurling accusations. "Why the fuck didn't you help her?" he screams. Melfi is afraid, but holds her ground. "I give my patients everything I've got," she tells Tony, "She slipped through everyone's grasp." When he's calmed down, Tony reveals what's really torturing him. With genuine sorrow in his voice he confesses, "She reached out...for me to care...and I wasn't there for her."

From that point, Tony does everything he can think of to prove that he's not a "toxic person." He makes Carmela happy by signing the papers for a living trust. He helps Carmela's cousin Brian score some significantly discounted designer suits. He takes Carmela, Brian and his wife, and Furio and his blind date to a Billy Joel concert. (Furio's date was arranged by Carmela; but when she saw him put his arm around her, she looked like she regretted her efforts.) He even treats Janice to an expensive dinner at Vesuvio, where he bestows his good wishes on her relationship with Bobby Bacala. In a rare moment of sibling intimacy, Janice tells Tony what he most needs to hear: that no matter what happens between them, "You always seem to reach out when it counts."

But when Tony reaches out to Artie Bucco, the results aren't so satisfying. Artie attempts to borrow fifty thousand dollars from Ralph so that he, in turn, can act as a shylock to the brother of Vesuvio's beautiful new French hostess. Ralph turns him down, explaining that if Artie fails to pay him back, "I ain't gonna be able to hurt you." When Tony finds out, he's the one who's hurt that Artie didn't come to him first. He lends Artie the money - at a half-point lower interest than Ralph. But when the Frenchman defaults - and beats Artie up, to boot - Artie becomes despondent. He swallows an overdose of pills and booze and then calls Tony, sobbing, "I love you and I'm sorry I let you down." Tony hangs up and calls 911.

When he sees Artie in the hospital, Tony is angry - because of what Artie did to him. "Suppose I come over to your house and I find you dead? How am I supposed to feel?" Tony shouts. He then tells Artie that he'll assume the Frenchman's debt - vig included, of course - if Artie wipes clean his six-thousand-dollar tab at Vesuvio. In his next session with Dr. Melfi, Tony is philosophical about Gloria and Artie. "One suicide is bad enough," he says, "But two? They can go fuck themselves. I made a donation to the suicide hotline in her name. That's it." So the past is past, and Tony can focus on the future...

...at least for the present.