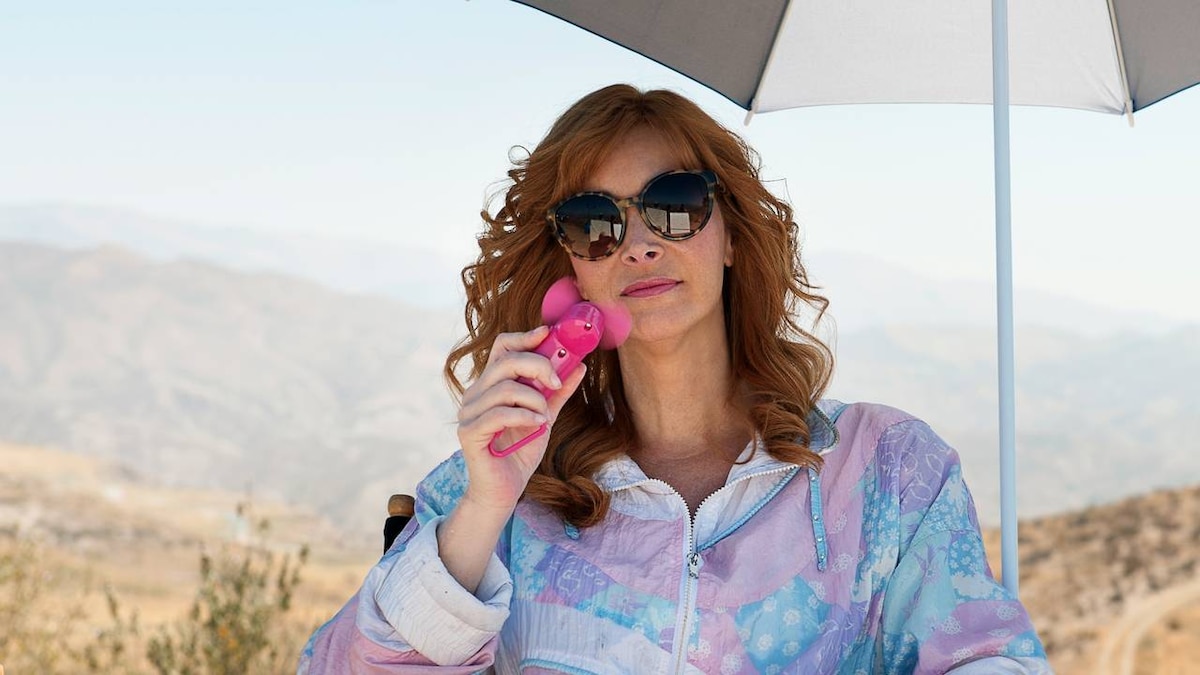 Valerie Cooks in the Desert

Valerie celebrates the ‘Seeing Red' review New York Times, highlighting the portions that mention her. Mark shows up. "There he is," Valerie says. "My stay-at-another-home husband." Valerie can't wait for the couple's planned sleepover on Saturday night, adding that she got them a reservation at Nobu in Malibu. Mark makes it clear he's irritated that the premiere party he came home for has been cancelled because Valerie has reshoots -- he drove all the way home for nothing. Mark tells Valerie he's not moving back after the 'Seeing Red' production finishes because he's already paid rent through the month.

HBO executive Rada shows up in Valerie's trailer to talk about the reshoots. The network wants to see more of Mallory. Mickey goes to the bathroom and makes distracting noise while Rada and Valerie chat. "I can kick the cancer," Mickey tells Valerie after Rada exits, "but the public humiliation is a whole other battle." Valerie assures him it's fine.

On the 'Seeing Red' set, Valerie discovers a Mallory set that includes her memorabilia wall, complete with her precious "I'm It!" chair back. Valerie balks, complaining that viewers will confuse Mallory with Valerie. Paulie G. instructs production to take down the chair back. Valerie mentions the New York Times review and the fact that television reviews are often mixed, setting Paulie G. off -- Valerie cites a review from BobTV.com to make him feel better. Ron tells Valerie she has to shoot in the desert on Saturday, which she tries to wiggle out of because of her date with Mark.

While Valerie's driving, Mark calls -- Val makes new dinner plans because of the desert shoot. She decides to cook dinner herself and goes to the grocery store to buy food. "Any wife can make reservations," she says proudly, "I'm making dinner!" After realizing that beef rollatini is too complicated, Valerie decides Mark would rather go out.

Gigi, the female writer from 'Room and Bored,' stops Valerie in the grocery store. The much-heavier Gigi tells Valerie she is working for 'Pretty Little Liars,' adopting a child and in sore need of a root canal. Gigi also says that she did a pilot for HBO a few years ago called 'Who Could Love You?' a female-driven comedy about a woman who woke up one day four times bigger than when she went to bed. "They picked up 'Girls' instead," Gigi whimpers, mentioning that she owns four houses and they're all empty and lamenting that it's difficult to get her dogs between the houses. "Don't show this anywhere, Jane," Gigi says, before leaving. "Women in this business are not allowed to cry. Don't show it." Valerie seems stunned at the encounter. "Wow, that's a cautionary tale, huh?" she says afterward. "That's what happens, though, when you make showbusiness your whole life, you know? The next thing you know you're eating kale chips out of a shopping cart." Valerie changes her mind and decides to take the beef.

On Saturday in the desert, Shayna tells Valerie that Paulie G. hasn't finished writing the final ‘Seeing Red' scene yet. Valerie reminds her that she has to be out by 5 p.m. While waiting, Valerie shoots a scene in the trunk of a car that's filled with fake snakes. Director Andie makes Valerie shoot the scene over and over, upping the ante of the situation each time, eventually employing real snakes. "There are no real dragons in 'Game of Thrones,'" Valerie reminds Andie.

Tyler mistakenly tells Valerie that Paulie G. is doing drugs instead of writing the final scene. She marches into his tent and he's getting a massage -- Paulie G. promptly kicks her out. While waiting, Valerie preps the beef rollatini with Marianina, the woman who sets her wig. "You're rolling out beef on my time?" an irritated Ron asks her. Tired of waiting and being pushed around, Valerie unleashes on both Ron and Shayna, after she's invited to set for the fourth time that day. "I know that you are not a fan!" she screams at Ron, who rolls away with his middle finger up.

At 11:30 p.m., Valerie arrives at Mark's Palisades rental with the rollatini. The place is dark, so she leaves the casserole dish on the doorstep with a note. As Valerie walks away, a couple of dogs dig into the rollatini. Valerie throws a "pebble" at Mark's window and breaks it. She tries to run off but Mark lets her in carrying the destroyed rollatini. Jane holds Valerie's note up to the cameras. It reads: "Marky Mark, I was late. Hopefully not too late. I love you. Valerie."