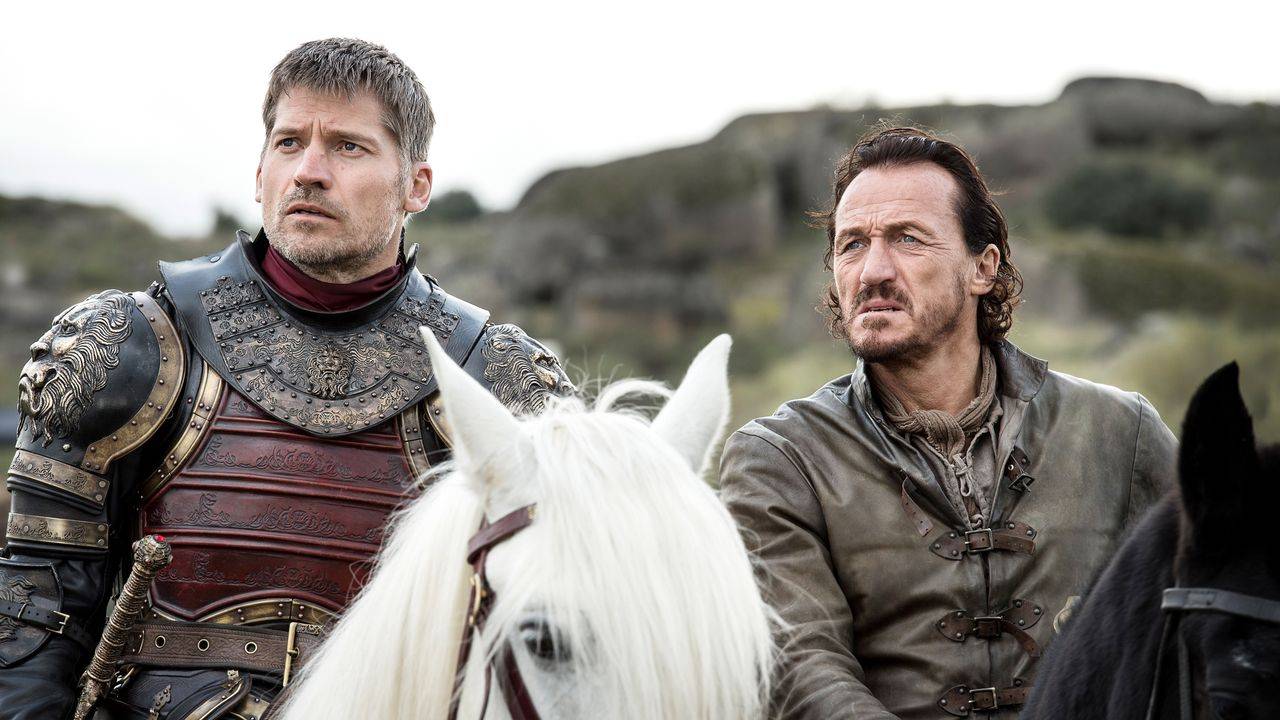 The Spoils of War

Jaime Lannister pensively inspects the passing carriages loaded with Highgarden gold. Bronn questions his sulky attitude and asks when he'll receive what he's owed. Jaime tosses the sellsword a bag of coins, promising he'll have his choice of castles when the war is won. Randyll Tarly, followed by his son Dickon, reports on the status of the stores and harvest also being loaded onto wagons.

In King's Landing, Tycho Nestoris is impressed Cersei will be repaying her debt so quickly. Cersei mentions she will need to expand her military to reestablish control over Westeros, and Qyburn has reached out to the Golden Company in Essos for support. Seeing potential in Cersei's future ventures, Tycho assures her the Iron Bank will also be happy to assist -- as soon as the gold arrives.

Within his Winterfell chambers, Bran sits in a new wheelchair as Littlefinger presents him with the dagger used in the attempt on Bran's life. While Littlefinger rues he couldn't save Catelyn, Bran unsentimentally examines the blade. Finally, he asks Littlefinger if he knows to whom it belonged; Baelish responds he doesn't -- the very question sparked the War of the Five Kings. Littlefinger's speech about the chaos of the world is derailed when Bran looks directly at him and quotes, "Chaos is a ladder."

Meera Reed enters Bran's chambers to tell him although she doesn't want to leave him, she feels she should be with her family. Bran agrees he no longer needs her. Heartbroken, Meera reminds him Jojen, Hodor and Summer all died to protect him, and she too put herself at risk. Meera realizes the Bran she knew died in the Three-Eyed Raven's cave.

Arriving at the Winterfell gates, Arya has trouble convincing two young guards of her identity. They escort her into the courtyard, arguing which one will tell Lady Stark about the strange girl. Arya slips away unnoticed.

Sansa, sitting in Jon's office, is unhappy her guards lost a stranger on the grounds. However, when she hears the girl asked for Ser Rodrik and Maester Luwin she realizes it is Arya, and knows exactly where to look.

Arya studies the statue of her father in the Winterfell crypt. Without turning, she acknowledges Sansa's presence: "Do I have to call you ‘Lady Stark' now?" The young women hold for a beat, before embracing. Arya downplays her new skills, and instead comments how unlike their father his statue looks. Inquiring whether Sansa murdered Joffrey, Arya reveals he was on her list of people to kill. Sansa laughs, not realizing the list is real. The sisters know they have long stories to share, and hug once again. Sansa pulls back to reveal another surprise: Bran is home, too. Arya lights up, but gathers from her sister's face something is wrong.

Arya rushes to her little brother in the godswood and is mystified when he says he saw her at the crossroads. Sansa explains Bran has visions. Bran confirms the reality of Arya's list when he says he thought she would be pursuing Cersei in King's Landing. Arya's attention moves to the Valyrian steel blade on Bran's lap. Once Sansa puts together what the dagger is, she wonders what Littlefinger expected in return from Bran. Remarking he has no interest in it anyway, Bran gives the blade to Arya.

The three surviving Stark children pass through the Winterfell courtyard. Looking on, Podrick tells Brienne she should be proud: She kept her vow. Littlefinger watches from above.

Arya comes upon Brienne training Podrick, and asks to be trained as well. Brienne offers to find the Master-at-Arms, but Arya insists she wants the person who beat the Hound. She points out Brienne's oath applies to both of Catelyn's daughters. Sansa, overhearing from the balcony, cannot conceal her expression from Littlefinger. Arya takes up Needle, while Brienne uses Oathkeeper, and the two women go at it. Arya's skill level surprises Brienne. The fight ends in a stalemate, both visibly pleased by the interaction. "Who taught you to do that?" Brienne asks. "No One," Arya responds with a smile before staring after the departing Littlefinger.

Daenerys and Missandei make their way down to the Dragonstone beach. Missandei asks for news of the Unsullied, visibly disappointed there is still no word. Picking up something new in Missandei's tone, Daenerys looks curiously at her friend, who begins to tell her about "everything" that happened. The women put their conversation on hold so Jon can lead them into a nearby cave.

Moving through small tunnels, Daenerys and Missandei look in awe at the walls covered in dragonglass. Jon brings Dany deeper, and they enter a smaller cave where Jon points out carvings on the wall: drawings of the Children of the Forest and First Men united against what is unmistakably the White Walkers.

Outside the cave, Tyrion and Varys hesitatingly tell their queen Casterly Rock has been taken. Dany doesn't understand why the news appears to be unhappy. Once informed about Highgarden, the Dragon Queen angrily wonders if Tyrion has what it takes to fight his own family. Daenerys again considers flying her dragons to the Red Keep, and asks Jon's advice. Initially hesitant to get involved, Jon watches the beasts flying overhead and suggests people who believe in Daenerys believe in her because she's made the impossible real again; they have faith she can build a better world. Using her dragons to "melt cities and burn castles" would make her no different from those that came before. Weighing her choices, Dany too looks to the sky.

Davos teases Jon he's noticed the King in the North staring at Dany's "good heart," but Jon waves the comments off. Missandei is confused that Jon's last name is "Snow"; in her homeland of Naath, there are no marriages, and thus, no bastards. The former slave girl is adamant her queen would allow her to leave whenever she wished. She reminds the men Daenerys is not their queen because of her name, but because she is who they chose. Jon smiles, until he notices a Greyjoy ship in the distance.

A small group of Ironborn, including Theon, alight onto the Dragonstone beach. Theon is genuinely shocked and ashamed to see Jon, and asks after Sansa. Jon makes it clear Sansa is the only reason Theon is still alive. When Theon explains he is in need of the queen's help saving Yara, Jon tells him Daenerys is not currently at Dragonstone.

The Lannister wagon train makes its way through Blackwater Rush. Dickon Tarly confesses to Jaime and Bronn the battle at Highgarden was his first -- and it wasn't what he expected. An unfamiliar sound rumbles in the distance, growing louder. Randyll and Jaime call their men into action as the Dothraki Screamers appear. Bronn urges Jaime to get himself to King's Landing, but Jaime refuses. His perspective changes as Drogon hurtles towards the battlefield. From above, Dany issues one command: "Dracarys." The Lannister line breaks in several places and the Dothraki rush in.

On Jaime's orders, Bronn makes his way to Qyburn's "scorpion," but is waylaid by a Dothraki fighter. Jaime, in his own one-on-one fight, is saved by Dickon at the last second. Bronn climbs into the covered wagon with the weapon, shooting its first spear into his Dothraki opponent. He begins to load a second bolt into the device.

Overhead, Tyrion watches as Lannister men are slaughtered. His attention is pulled away when an eight-foot bolt flies past Drogon. Muttering to himself, Tyrion tries to will Daenerys away from Bronn and the "scorpion," but the Queen of Dragons dives in at top speed. As Drogon opens his mouth, Bronn takes aim and shoots, hitting Drogon but barely escaping Drogon's flames himself.

Though hit, Drogon is not seriously injured. From their own perspectives, Tyrion and Jaime watch Drogon land near the river. Dany climbs down to remove the harpoon from his scales. Tyrion sees Jaime grab a nearby spear and charge the dismounted queen. Drogon swivels his head to attack until Bronn, riding in on his own horse, tackles Jaime. The two men fall into the river as Drogon's flames engulf both horses. Underwater, Bronn and Jaime float alongside drowning and dead men whose armor weighs them down, while flames blaze above. 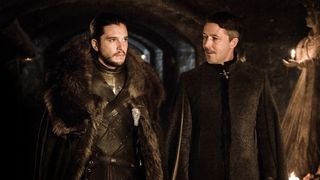 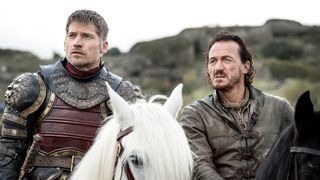