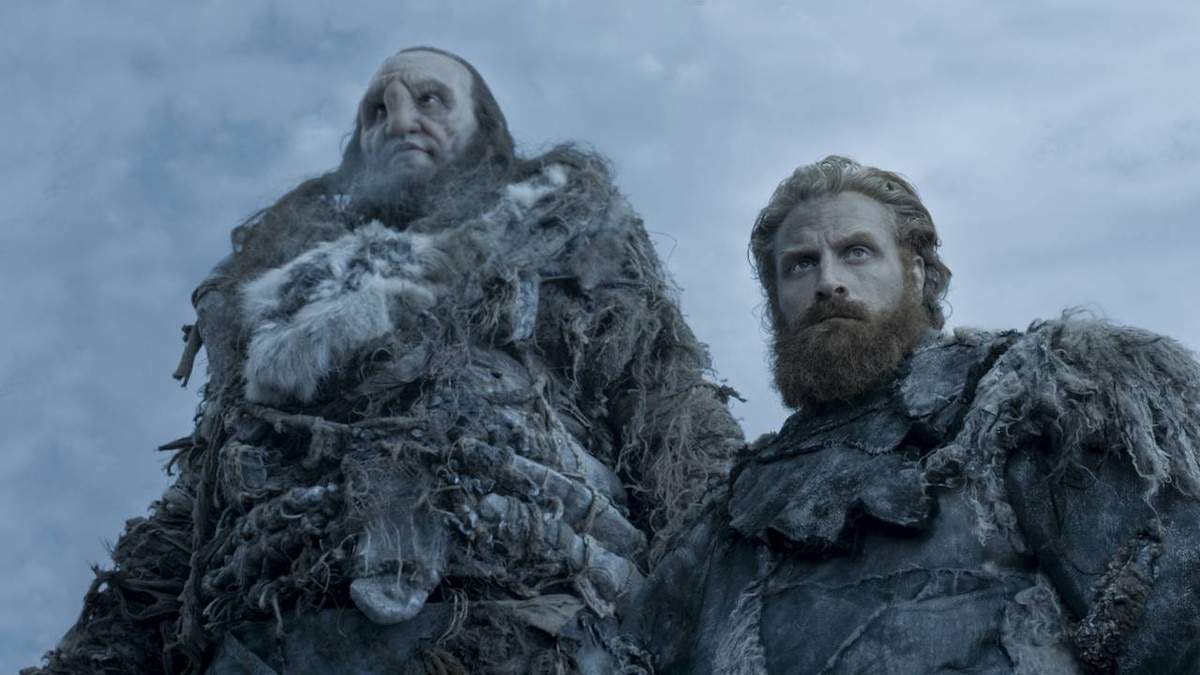 Battle of the Bastards

In response to the attack on Meereen, Daenerys decides she will crucify the Masters and destroy their cities. Tyrion likens Dany's plan to her father, who planned to King's Landing with wildfire, and suggests "an alternate approach."

Daenerys and her council meet with the three slaver envoys, who assume they are negotiating Daenerys' surrender. The trio inform the queen the Unsullied and Missandei will be sold to the highest bidders, and the dragons slaughtered. Daenerys clarifies her position by climbing onto Drogon and leading her three dragons to lay waste to the slavers' warships, while Daario and her Dothraki horde cut down the Sons of the Harpy surrounding the city.

Missandei tells the envoys one of them will die as punishment for breaking their pact. Razdal and Belicho shove Yezzan forward, but Grey Worm slashes Belicho and Razdal's necks instead. Tyrion charges the still-startled Yezzan with telling his people what happened "when Daenerys Stormborn and her dragons came to Meereen."

In a field outside of Winterfell, Jon Snow and his supporters meet with Ramsay Bolton and his contingent. Ramsay tells Jon to kneel and all will be pardoned. Agreeing there is no need for thousands to die, Jon offers to fight one-on-one instead. Ramsay declines and reminds them he has Rickon, presenting Shaggydog's head as proof. Sansa coolly tells her husband he will die the next day. Looking at the men, Ramsay comments his dogs have not been fed in a week. "In the morning then, bastard," he says.

Jon, Davos, and Tormund lay out their battle plan while Sansa listens from the side, excluded. Clearly outnumbered, they determine it is crucial that Ramsay's men charge first. Once alone with Jon, Sansa voices frustration she wasn't consulted given her knowledge of Ramsay. When Jon asks how she suggests they get Rickon back, she says they probably never will. "As long as he lives, Ramsay's claim to Winterfell will be contested," she explains. Admitting she knows nothing about battles, she advises Jon to not do what Ramsay wants. Jon scoffs at the obviousness of her suggestion, but Sansa insists that what's most obvious is they should have waited to build a stronger force. "Battles have been won against greater odds," Jon says. Sansa makes one thing clear: should Ramsay win, she will not go back to him alive.

Disturbed by his conversation with Sansa, Jon tells Melisandre she is not to bring him back should he fall in the battle. The priestess denies his request, reminding him that she serves the Lord of Light, not him. She does admit, however, that the Lord of Light might only have brought Jon back to die in the battle anyway.

Discussing Stannis Baratheon and Mance Rayder, Davos posits to Tormund their mistake might have been believing in kings. "Jon Snow's not a king," Tormund replies, and leaves for a drink.

Walking the camp all night, Davos discovers snow-covered mounds of charred timber, the remnants from Shireen's pyre. Amongst the ruins he finds the carved stag he made for Shirren, completely scorched. Before he can process what this means, a war horns sounds in the distance. It's time for battle.

Daenerys and Tyrion receive the Greyjoy siblings, who offer their ships in exchange for Dany's support of Yara's claim to the Salt Throne. Acknowledging Euron will have his own pitch, they explain that Euron's overture will include a marriage proposal. Daenerys is intrigued by Yara, but states that, unlike their fathers, they will leave the world a better place – the days of reaving and raping are over. Hesitating momentarily, Yara agrees to give up the Ironborn way of life. The two clasp arms in agreement.

Jon's troops stand in formation across the battlefield from the much larger Bolton army. Ramsay leads Rickon by rope to the front of the lines and surprises everyone by cutting Rickon's binds. Releasing the boy, Ramsay tells him to run to his brother. Rickon sees Ramsay's bow being brought to him and speeds toward the other side. Disregarding caution, Jon leaps onto his horse and races to reach his brother before the arrows do, but fails. Rickon is struck down and Jon, overcome with rage, loses sight of his side's careful strategy and charges the Bolton army. The Stark troops follow their leader into battle while Ramsay commands his archers to loose and his cavalry to charge. Staggering to his feet after his horse is hit, Jon prepares to face oncoming death, but is saved by the arrival of his cavalry, which collides with the Boltons'.

Men and horses fall everywhere, especially where the two cavalries met. As bodies start to pile up, Davos and his archers drop their bows, draw swords, and rush forward. The Bolton forces then march forward and surround the Stark supporters with a shield wall, and lower their spears. Wun-Wun the Giant and Tormund attempt to break through, but the shielded troops move forward, skewering Jon's men and crushing them against each other. When the wildlings try to flee over the pile of bodies to their rear, they're met by Ramsay's own infantry, led by Smalljon Umber.

Tormund and Smalljon exchange blows, and it looks like Tormund has finally met his match. Jon is knocked down and might be trampled to death. Ramsay watches his imminent victory with glee from the safety of the high ground. Jon finally claws his way above the fray, looks around, and knows the battle is lost. Then a warhorn sounds -- the Knights of the Vale have arrived. From a distance, Littlefinger and Sansa observe as the Vale cavalry break the Bolton lines. Tormund gouges out Smalljon's eyes and finishes the kill. Jon spots Ramsay headed back to Winterfell, and he, Tormund, and Wun-Wun tear after the Warden of the North.

Ramsay bars the gate, confident he can wait out any siege. Wun-Wun, using what's left of his energy, breaks through the heavy doors. The giant's body shields the wildlings from the Bolton arrows, allowing them to rush into the courtyard and take it. As Jon goes to see to Wun-Wun's wounds, the last of the giants is killed by an arrow to the eye. Ramsay, standing with bow and quiver, taunts Jon, "You suggested one-on-one combat, didn't you?…I've reconsidered." As Ramsay draws and looses, Jon snatches a shield and blocks the arrows with singularly focus. Finally he reaches Ramsay and pummels him. He stops only when he sees Sansa: Ramsay is not his to kill. The Stark banner goes up and Jon instructs his men to bury Rickon in the crypt, next to Ned.

Sansa heads to the kennels where the bloodied Ramsay is chained to a chair. Her former torturer tells her, "You can't kill me. I'm part of you now." As the hounds pad forward, Ramsay is confident his beasts are loyal. "They were," Sansa says, "but now they're starving." An animal sniffs, then rips into Ramsay's face. He screams as the other dogs join in. Sansa watches for a moment then turns away, smiling at her revenge.